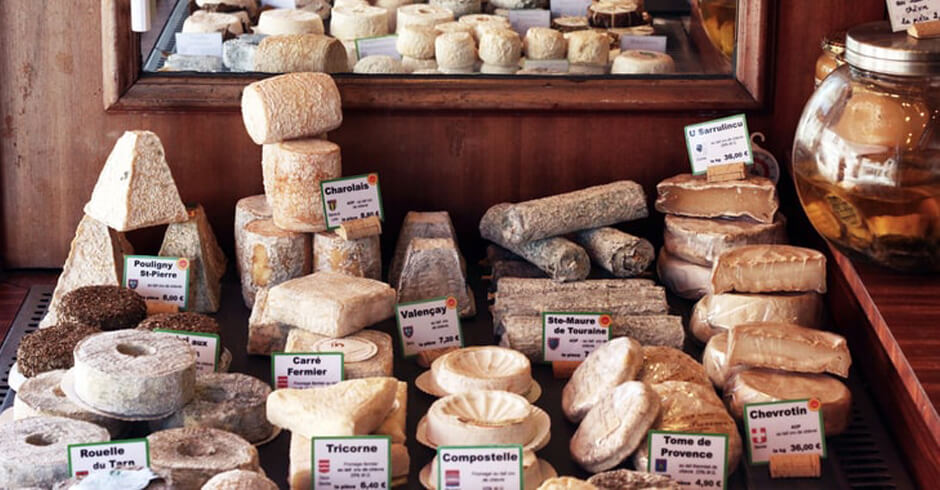 I remember the first time I walked into a supermarket in Paris, I stopped dead in my tracks when I saw the cheese selection. There were more cheeses in one place than I had ever seen in my life, stretching out underneath the fluorescent lights. Soft and creamy goat cheeses, hard and strong sheep cheeses, tender brie and blue cheese with thick mouldy veins. There were cheeses of every shape, size and variety.I saw cheese everywhere I went on my travels in France – in the supermarkets and in the open air stalls of the marketplace. Cheese boards were on the menu of most every restaurant, while it would be hard to find a park without Parisians picnicking with bread and cheese. A good cheese – usually along with wine – is one of the important element of a French meal. Statisticians say that French people consume up to 57 pounds of cheese per person per year.

So it’s fair to say the French truly have a passion for cheese. They have been eating it for so long that they cannot imagine life without it. It’s a part of their culinary culture and lifestyle.

Traditionally, you’ll find that cheese is consumed after the main course and before the dessert. Usually a plate is served with at least three cheeses, each representing a different style of cheese or a different type of milk (sheep, cow or goat). The cheese plate should be served at room temperature, as this is optimal for flavour. Usually the cheeses are arranged around the platter from the mildest to the strongest.

Also see  Why is Sushi So Prized?

HAVE THE FINEST WHISKY & CHEESE PAIRINGS IN LONDON >> 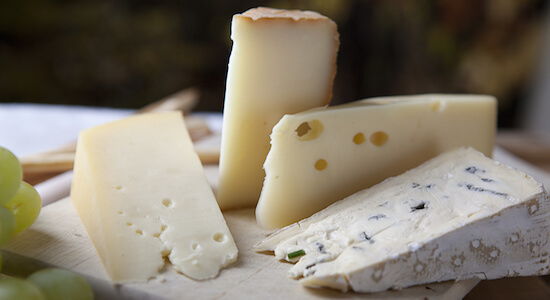 It’s impossible to know how cheese itself was invented – it is thought to date back as far as 8000 BC. There are many ancient records of early production of cheese, including Egyptian wall paintings that depict milk being stored in skin bags. There is a theory that cheese was invented by nomadic tribes in Asia when they were transporting milk in animal skins and the churning and fermentation turned it into cheese.

It is thought that the Romans introduced the first cheeses into France. It was the French monasteries that began to perfect the delicious tradition of French cheese. These monks were meticulous in creating these cheeses and their experimentation is where we came up with the numerous varieties that we have today.

Throughout the years each region developed its own unique variety of cheese – influenced by the climate and vegetation. For example, Camembert and Brie originate from the northern region while Emmental is only made in the French Alps. Strongly scented Roquefort cheese comes from the south and most goat cheeses are made in Western France. France has such a wide range of climates, which is why each cheese tastes very different depending on where it was made.

All 22 different regions of France produce cheese and there are seven different “families” – Fresh Cheese, Blue-Veined, Hard, Semi-Hard, Processed Cheese, Soft-Ripened and Chevre. When you are pairing wines with cheeses, they tend to pair well together if they are from the same region. 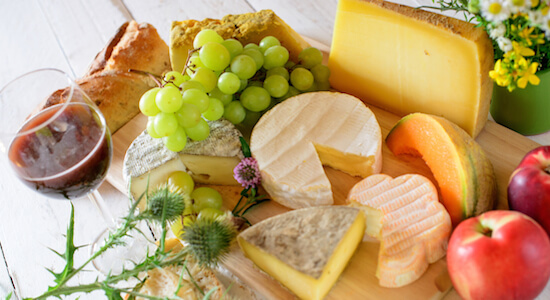 In the early 1990s there was a period of time when European Union bureaucrats wanted to make regulations that would control the bacteria levels in cheeses and other dairy products throughout the EU. The French were opposed to this and they furiously defended their cheeses. France without its distinctive varieties of cheese just wasn’t right.

How to Enjoy a Cheese Plate in France

According to French dining etiquette you should pass around the platter of cheese and take some of each that you would like to eat, placing it on your plate. The bread sits on the table rather than on your plate and you break off bite sized pieces. Spread the cheese from your own plate onto your bite of bread.

The cheese is served whole so that it will stay intact and be as moist and flavourful as possible. Each person slices off the amount of cheese that they need. When the plate comes around, make sure that you cut the cheese so that each person gets at last a bit of the rind. The flavours of the cheese are different from the center of the cheese to the edge of the rind.

Since they eat so much cheese, you might wonder why the average French person isn’t overweight. However, French cheese is eaten in moderation – it’s all about quality vs. quantity. Having a little bite of high quality cheese after a meal will help you to feel more full and satisfied, which will result in you eating less as a result.