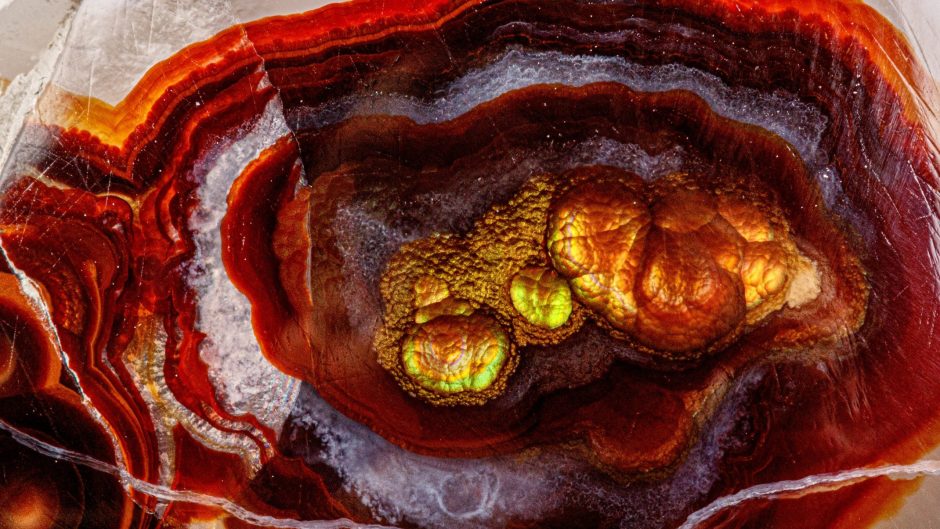 The brightly coloured fire agate stone came to be in the Tertiary Period, many million years ago. Since then, the stone meets a wide range of needs – from jewellery to healing. It also offers protection against negative energy and promotes a more fulfilled life. The fact that volcanic activity played a role in its formation makes it even more alluring.

Looking for a little fire in your life? Find out more about this gem with us…

What Is Fire Agate? 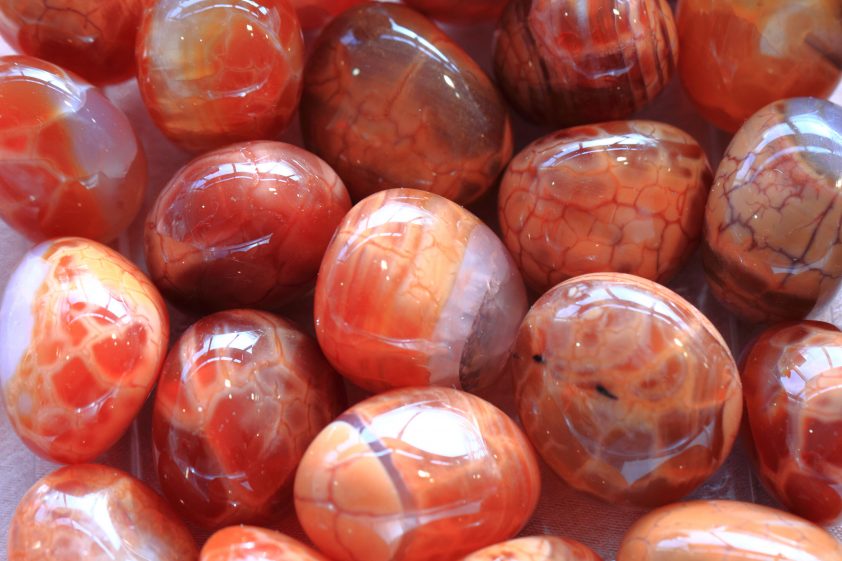 Fire agate stone originated around 36 million years ago when volcanic activity plagued the Earth and the plates shifted dramatically.

This semi-precious gem is part of the chalcedony family, which comprises of many varieties of cryptocrystalline quartz gemstones.

Fire agate gems have a semi-transparent base with red and brown hues and their gold, red, orange, and green colouring look a lot like flames. The colours occur as a result of light interference interacting with limonite crystals and iron oxide.

Where Is Fire Agate Found?

You can find the fire agate stone in the mountain ranges and deserts of northern Mexico and south-west America. Some say that the colour of the stone resembles the intense heat of the area.

Also see  What is Moss Agate? Meaning & Uses for this Special Green Gemstone

Considering the volcanic activity that took place to form the gems, it’s easy to see where it got its colour from. Arizona has the largest deposits of fire agate, making it the most profitable market for this gem.

What Is The Meaning Of Fire Agate?

The gem is a grounding and protective force, and it has a calming energy. Fire agate is said to be able to shield the wearer from harm and ill wishes and helps you to deflect negativity.

It’s been found to stimulate energy and improve your sexual vitality and libido too. It stimulates energy and life force, and this makes you feel more vital and energised.

What Is Fire Agate Worth?

The stone itself has a modest value, but the labour and effort that goes into mining it increases the value. Larger stones or stones with distinct patterns are worth more. Custom cut pieces are also available and depending on what cut is desired, they can be expensive.
The value is also determined by the colour, shape and cut of the stone. If the stone features rare colours, the value will increase. Weight per CTS can differ from around US $5 and go up to around US $40.

What Is Fire Agate Good For and What Are It’s Healing Properties?

Fire agate is believed to combat skin conditions, strengthen your blood vessels, and cleanse the pancreas and lymphatic system. Stomach and eye ailments can also receive relief from this gem.

Problems in the bedroom? The fire agate is used to release blockages and give you the vitality you need to perform.

Is Fire Agate The Same As Red Agate?

Contrary to popular belief, the two stones are not the same. They even have different perceived abilities. This is as a result of the different colouring of each stone.

Fire agate received its name as a result of the colours and patterns that it possesses. The patterns resemble sparks of fire and it’s something to behold. Red agate doesn’t have the same patterns; it’s simply red.

Choosing between the two will depend on your colour preference as well the unique properties of each stone.

What Chakra Is Fire Agate?

Fire agate is associated with the gut chakra. Because of this, the gem is used to cope under pressure and have the energy to get through the day. This particular agate stone is said to remove and transform negative energies. You can even send negative energy back to the person that transferred it to you.

How To Polish Fire Agate

Fire agate is a hard stone and is much harder to polish than other gems. Most jewellers recommend using diamond tools when working with the stone. This is because a diamond is harder and able to work the stone properly to get the best results.

Tools to use include diamond grinding wheels, flex shafts and Dremels. Diamond paste is often used for polishing purposes. Grinding wheels can remove the most dirt and debris in a shorter period of time, making it easy to reach the desired layer. The flex shaft and Dremel will help you to shape the stone.

It’s important to keep the stones and tools wet while working with them. This will prevent premature wear and tear on the tools and also reduce the risk of damaging the stone. Use light pressure when working on the stone, being careful to only remove one layer at a time. When you begin to see the fire layer you need to be gentle, going too far into it will ruin the fire agate stone.

There’s a fine line between enhancing this gem’s beauty and destroying it. It takes years to perfect the skill and even then, there’s still a chance of going too far.

Looking After The Fire Agate Gemstone 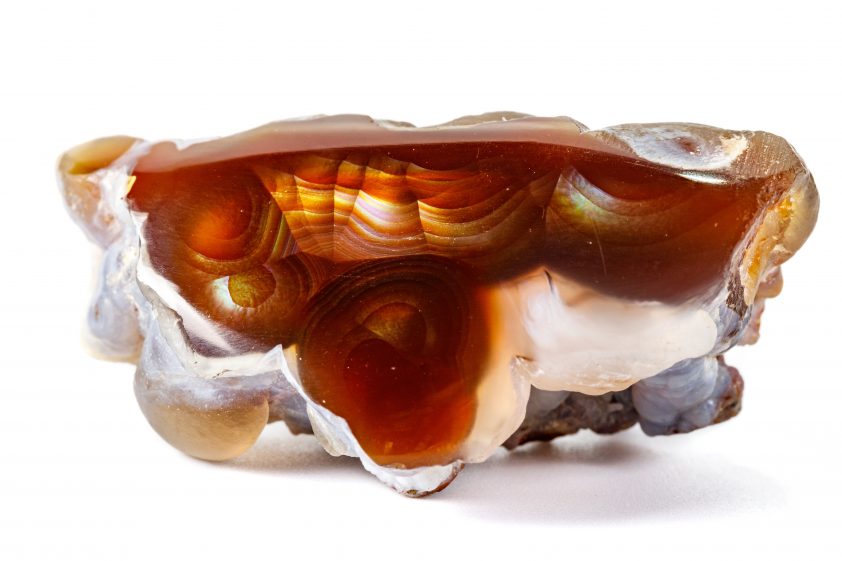 The fire agate is part of the quartz family and is very durable. You can clean it using a soft cloth and warm soapy water. Rinse it after cleaning to remove residue. While the stone is hardy, it’s prone to scratches, damages and stains.

Avoid using harsh chemicals to clean the gemstone as it will damage it. Rather be gentle and take your time.

Part of the appeal of fire agate gems in history was the fact that they resemble fire, which is a life source. These stones were often worn as an amulet or talisman to protect the wearer from harm and promote a balanced life. In modern times, this view hasn’t changed, and people often turn to this stone for its healing properties.

It’s a gorgeous gem and one that looks beautiful when set in jewellery or simply displayed on its own. If you want to add a little heat to the bedroom, boost your feelings of positivity or simply adore red gemstones, fire agate is a fabulous choice.

If you love agate stones and their powerful meanings, have a look at these articles on other agates: