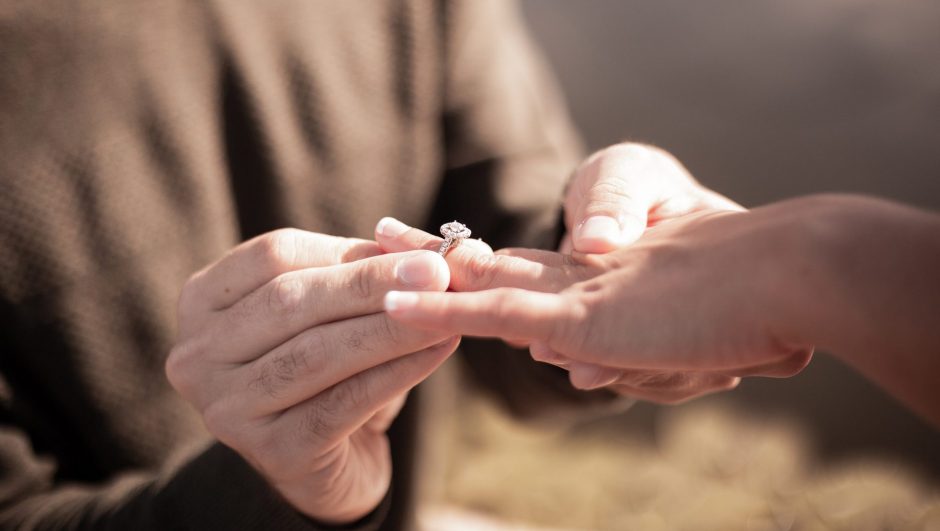 The COVID-19 lockdowns of 2020 were tough on us all. However, they’ve produced an unexpected wave of marriage proposals that have millions of love-struck Brits frantically searching for the perfect ring. Here’s our roundup of engagement ring statistics for the UK.

Since the first lockdown of March 2020, Google searches for engagement rings soared 22% compared to the year before. Numerous jewellers in the UK have reported a distinct increase in engagement ring sales.

Culturally and historically, there are several “rules” in place regarding how much a person should spend on an engagement ring for their partner. But, in such complicated and changeable times, it can be difficult to separate outdated information from practical advice which applies not only to modern relationships but to our current economic position.

However, the number of people who seem to be willing to spend significantly less than the national average is on the rise. During the past few years, over 18% of grooms spent no more than £500 on their bride-to-be’s sparklers.

Fortunately for our bank accounts, spending less and less money on engagement rings seems to be a growing trend. In fact, Poundland found great success with its £1 engagement ring, selling 20,000 in the space of just seven days.

As of 2022, however, the average price of an engagement ring in the United Kingdom saw a rise, with rings now costing £2 100.

While surveys revealed that the prices of individual rings ranged from between £600 and £10 000, the average spent was much less. United Kingdom jewellery retailer Mappin & Webb reported that searches on how to propose have also gone up by 14% since last year. With trends changing on such a regular basis, it makes sense that you don’t rely on them too heavily when you’re ready to pop the question.

With the average UK monthly salary being £1,950 in 2021, the UK average engagement ring price (£1,865) was just shy of half the traditional “two-month salary” standard.

Here is where many soon-to-be-spouses may feel conflicted.

In 1947, global diamond retailer De Beers started a marketing campaign that was so successful, it set the standard for engagement ring purchases to be worth two months salary.

Their slogan, “How can you make a two-month salary last forever?” implored young romantics to view their purchase as a crucial investment for eternal love, and remains to this day a cultural norm.

Since then, various other jewellery merchants and social constructs have suggested taking this tradition one step further with a three-year salary custom.

But don’t feel alone if those words frighten you – after all, these are marketing campaigns designed to make money off of you, and there is no objectively wrong or right amount to spend on a ring for your loved one.

When you factor in that weddings in the United Kingdom cost in the region of £20 000 as of 2022, spending according to the statistics on other peoples’ budgets would total around 15% of this.

Don’t forget that, while some may consider this perfectly viable, others would prefer to put that money somewhere else. Into the wedding, your honeymoon, or even where you’ll be making your home together, for example. It’s up to you.

Eating Out Or Engagement Ring?

While the average cost of an engagement ring came to around £1,865 in 2021, it’s surprising to see how else Brits choose to spend this kind of money.

Research suggests Brits spend about £250 more on dining out in just one year than they do on their partners’ engagement rings.

Moreover, people in the UK spend almost the same amount on engagement rings as they do working in the office a year. Office workers spend nearly as much as £1,712 on transport, food and social activities, as they do on an engagement ring.

It turns out that the age of the person making the sparkling purchase has a significant influence over how much money will actually be spent.

For example, 45-55 year olds were surveyed to spend an average of £691 on their engagement rings – well under half of what younger couples are currently spending.

Studies suggest that the reason for this is because older men and women are more likely to be having their second or third marriage, which will typically be a more low-key affair than the first.

The following list details the average amount expected to be spent in each region as of 2021:

But as is the case with many things in life, expectations do not always match reality. Despite the fact that the above regions are expected to spend certain amounts of money on engagement rings, the realistic purchase amounts look quite different.

Below is a list of British regions paired with their average ring spend, ranked from highest to lowest, in 2021.

One of the many intimidating aspects of choosing an engagement ring for one’s partner is picking one that meets their personal standards and expectations.

In 2021, 50% of the British population agrees that they expect no more than £1,000 to be spent on a surprise engagement ring – which is significantly less than what people are actually spending.

Furthermore, only 24% of the population says that they would expect their partner to spend upwards of £1,400 over the same period, which is a little closer to the national average spent on a dazzling diamond ring.
2022 and 2023 Marriage Trends

Interestingly, estimations tell us that marriage rates are currently in decline and will continue to do so at a compound annual rate of 3.6% from 2022 to 2023.

This is due to our attitude towards wedlock changing and the median age for engaged couples continuing to rise. This makes it all the more special when you find someone you believe is the right fit and means you’re not held to historical tradition when it comes to how long you take to propose or the length of your engagement. These factors could play a significant role in how much you can afford to spend.

Put A Ring On It!

As the world evolves, weddings, relationships, and engagements evolve with it. In the midst of a battling economy and more recently, a pandemic, people are having to get more creative about how they choose to celebrate their proposals.
The data speaks for itself – our standards and expectations around engagement rings are clearly changing, and it’s about time.