Blog » Things To Do » What's On » Autumn » What are the Best Dishes and Ingredients for Autumn? 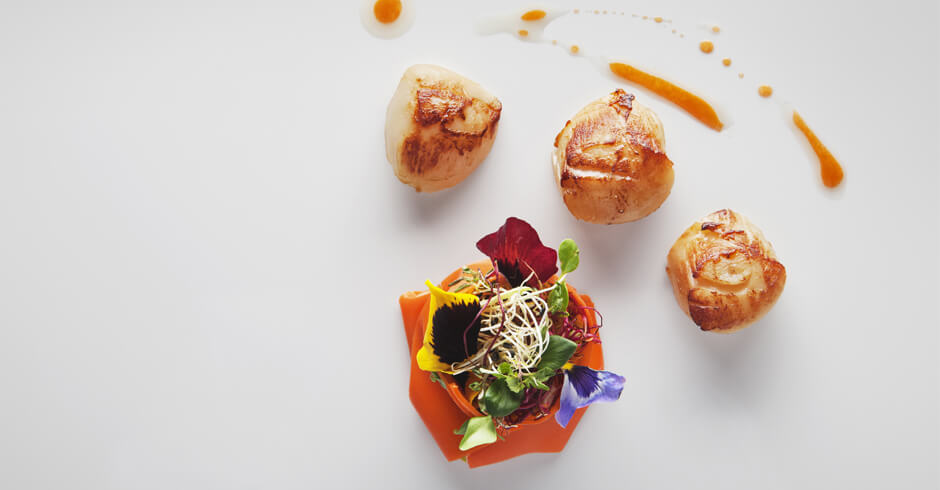 Whether it’s in a restaurant kitchen or at home, there are chefs out there that rub their hands when contemplating what’s coming into season, because it changes the shape and appearance of their dishes as much as it does the taste.

Graham Garrett, the chef at the West House, says there are no two ways about it. ‘When they’re gone [out of season], they’re gone and you change dishes and you get inspired by what’s next to come in.’ According to Graham, It’s especially a good idea that he sources fresh, seasonal ingredients if he ‘doesn’t want the local farmers kicking the door in.’

Sad as it is to say goodbye to summer eating, autumn brings with it all manner of culinary compensations for our sensory delight. From figs to mushrooms, apples, game and chestnut, autumn offers a superb choice of dishes, with meals often taking on a heartier note. We take a look at some of the finest autumn dishes in the UK.

To start: Beetroot Salad, The Square 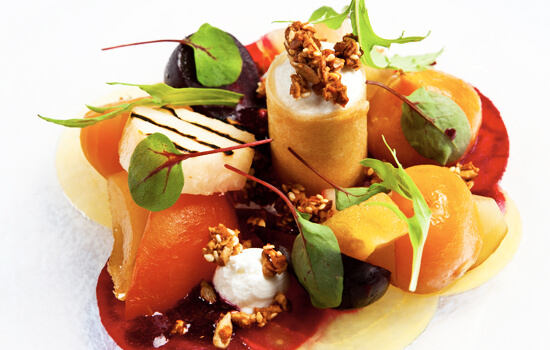 This starter includes as its main constituent a typical autumnal ingredient, the beetroot. Ripe for culinary inclusion throughout the season, the beetroot is packed with vitamins, minerals and powerful antioxidants.

It is not the only classically autumnal dish on The Square’s menu. Chef Phil Howard ensures best-in-season ingredients, mostly sourced from within the British Isles, make up the bulk of the menu at all times. This autumn, another season dish gracing the menu is the delightful cornish pollock with baked pumpkin, chestnut spätzle, autumn leaves and roasting juices. 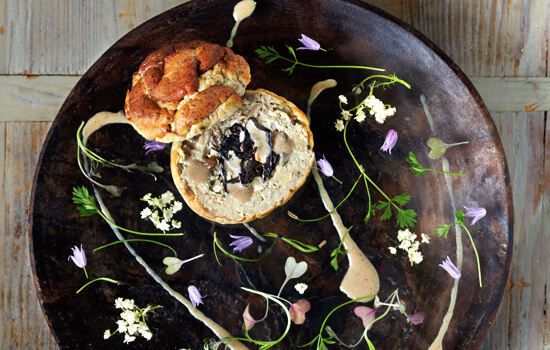 This is no ordinary pie, from Club Gascon’s revered chef, Pascal Aussignac. Writing in The Telegraph, Jan Moir stated that she “nearly dropped my fork in surprise after one bite, so obvious was it that here was an establishment of serious food and serious intent.”

The warm pie pulls together two staple autumn ingredients – with a kind of duck mousse that includes a vein of morel mushrooms and herbs inside. Mushrooms are a staple ingredient throughout autumn, while duck is best consumed in October and, in particular, November. 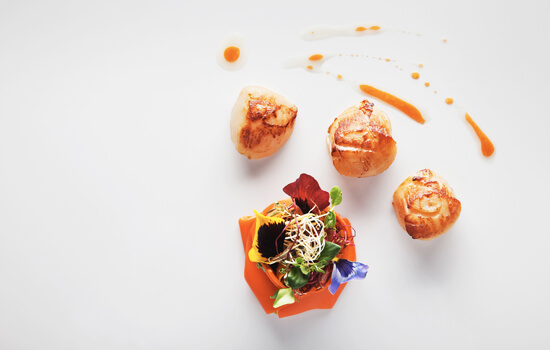 The next of the finest autumn dishes is a classic offering originally from Ametsa’s birthplace, the Michelin three-star Arzak in San Sebastian, Spain.

This scallop dish is an autumnal treat to behold. Three perfectly seared scallops come accompanied by ‘onion rocks’, or so the literal translation would have us believe. In Britain, scallops are best consumed at the beginning stages of the season. 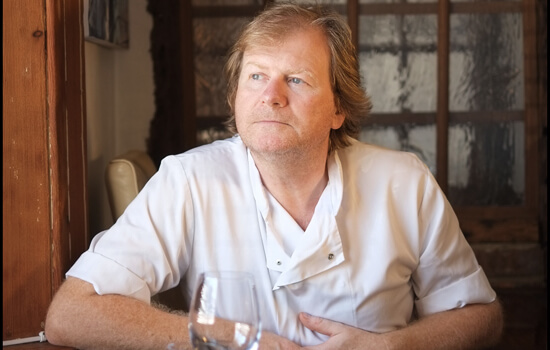 A combination of the best-in-season fruit, this dessert from The West House is a warm and hearty crumble. It includes apples – an autumnal treat in Britain throughout the season, blackberries – particularly ripe for the picking throughout September and October, and cobnut. It comes accompanied by a delicious elderberry sorbet.

Believe it or not, there’s a reason we eat Brussels sprouts with our Christmas lunch, as October through ‘til March is when they are most ripe for their picking. Generally, selecting ingredients that grow best at particular times of the year is the best way to save money, acquire the tastiest crop, and be kind to the environment as well as your insides. Only restaurants that know what they’re doing will have chefs that cook with the correct seasonal ingredients.

Though you might not be a Michelin-star chef, there’s no reason to no make the most of what Mother Nature supplies at certain times of the year. Here is a selection of the best Autumn ingredients to get excited about for your cooking. 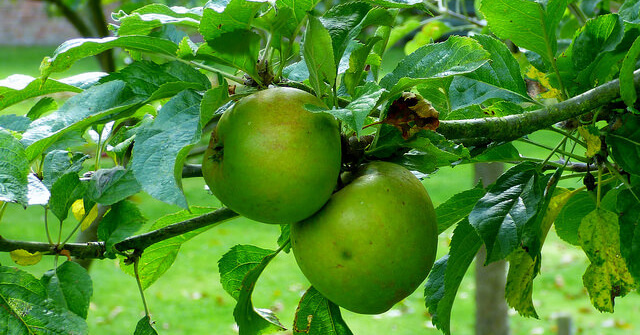 There might be 7,000 varieties around the world, but Britain only grows 12 of them. If you see an apple pie or an apple crumble on the menu and it’s not between September and February, then the restaurant you’re at isn’t doing it right.

When in season, the beetroot is one of the most nutritious vegetables available in Britain. Often seen in salads but sometimes even used in chocolate brownies, the beetroot is more versatile than one might think.

Some might still see butternut squash as an exotic vegetable, especially when it’s only around for 2-4 months of the year in Britain. While there are many types of squash, pumpkins and butternut are exclusively winter varieties.

In order to be fresh, chestnuts must be harvested between October and January, giving a small window to those who enjoy roasting them over an open fire. When cooked, their aroma alone is evocative of the autumn and winter months.

The cranberry has for centuries been highly prized for its medicinal properties. Cranberry sauce also happens to complement turkey exceedingly well, which is probably why we insist it’s put on the table for Christmas dinner. 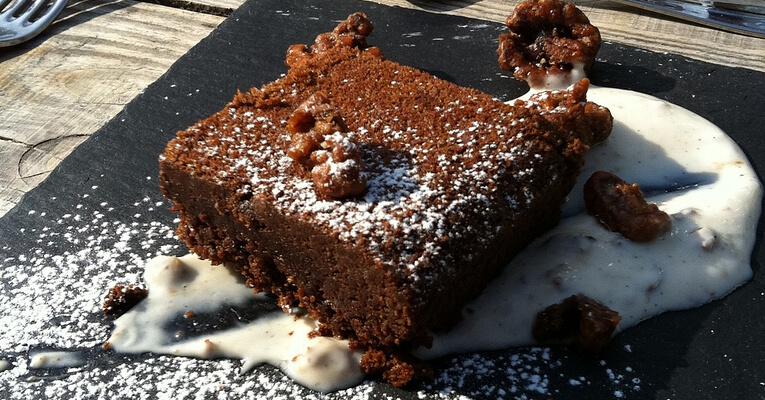 Now coming to the end of their late summer/early autumn tether, figs only have three months of the year in which they are best cultivated. When dried, however, figs can be consumed all year round, and are just as nutritious.

As it’s available at this time and through the winter, it’s no surprise restaurants serve it as an alternative to turkey. Especially if they’re in a Dickensian novel and the plumpest birds have all but run out. When the meat wasn’t quite so expensive, there was a time when goose was more commonly seen on dinner tables.

As all guinea fowl originate from Africa, the birds will mature around October time in Britain. With flesh that’s dry to the mouth, guinea fowl can be compared, and often stand in as an alternative to, chicken or pheasant.

Just like apples, only a few varieties of pear are freshly available in Britain. Due to their demand all year round however, as much as 80% of pears consumed are imported. Pears are one of the few fruits that continue to ripen after they’ve been picked.

More commonly perceived as ornaments rather than edibles, pumpkins should be gathered while they can because they’re not around for long. Restaurants that properly and proudly take advantage of seasonal ingredients might put dishes such as pumpkin pie or pumpkin soup on their menus during the autumn months.

If all of these fine ingredients have whetted your appetite, why not check out our list of fine dining restaurants for an unforgettable culinary experience focused on seasonal ingredients.