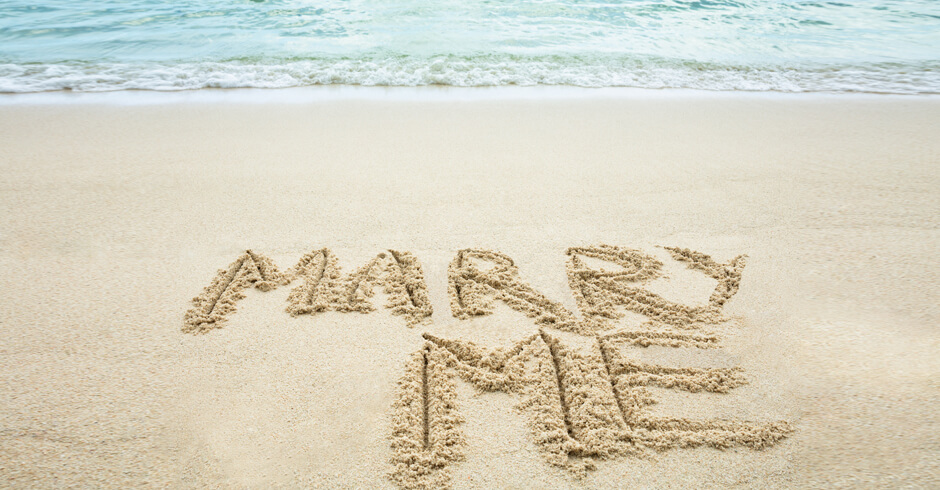 If you’re looking for extravagance in general, it’s rare you have to look much further than a couple preparing to solidify their affections for one another. Wedding proposals aren’t normally considered the most expensive of gestures (not counting the ring), but as you’ll notice, in many cases they prove that the sky is literally the limit.

Graciela Asturias, a 27-year-old architect from Manhattan, got a unique birthday present from her fiancé Alex when he hired a Boeing 727 to take them into zero gravity for 90 minutes. Producing a ring as the couple floated in the aircraft’s cabin at 35,000 feet, Alex admitted to being a little relieved when the thing itself didn’t float off. The ‘trip’ cost $7,000. Thankfully Graciela said yes.

Josh Ogle spent $45,000 to ask his girlfriend, Nataliya Lavryshyn, for her to marry him. The couple started from the luscious rooftop of New York City’s McKittrick Hotel, where Pablo Neruda’s love poems were scattered about their feet. After fitting a $21,000 diamond ring onto Nataliya’s hand, a 1932 Hupmobile whisked them away to Daniel Boulud’s Michelin 3-star Flagship restaurant, where they had a private dinner in the exclusive ‘Skybox’. The next day, the couple flew to Greece and France for two weeks, where they stayed in private villas and honeymoon suites. Alright for some.

Marcial Alzugarcy set up his proposal under the guise of a fake tour on board the USS Intrepid in Manhattan. Leading his girlfriend Brynn Joyce to the top deck of the ship, Marcial excused himself. While waiting for him to return, a marching band materialising on deck began playing Michael Jackson’s ‘Thriller’ while carrying a banner reading ‘Marry Me?’ The band then parted, revealing Marcial on one knee in a tuxedo as he offered up the ring. After Brynn’s breathless ‘yes,’ family and friends arrived holding a banner depicting the words ‘mission accomplished.’ With the help of a wedding planner, Alzugarcy had spent $10,000 on proceedings.

This one’s a little closer to home. Abbie Miller suspected nothing when her boyfriend, Richard Ing, took her to a private screening at a cinema in their hometown in Norwich, along with fifty members of their friends and family. Five minutes into the film, Richard is shown attaching helium balloons to a box containing the engagement ring before launching the box, ring and all 109,154 feet up into the stratosphere. Ingeniously, the box opened and closed during its descent, revealing the handwritten question to Abbie. She said yes.

Despite filing for divorce in 2012, pop singer Seal and model Heidi Klum had an engagement that a lot of couples would have never even dreamed of. Chartering a private helicopter, Seal took Heidi on an adventure out of civilisation and up to a naturally formed glacier14,000 feet high in the Canadian Rockies near Whistler. Waiting for them was an igloo hollowed out from a pile of snow, containing various luxuries such as bed sheets, scattered rose petals, candles, and champagne.

For those looking to create an experience to last longer than just a moment, TRULY has plenty in the way of inspiration. From champagne afternoon tea in Ladurée’s tearooms, to private dining at Mosimann’s, to a 5-star country break in the Irish countryside.