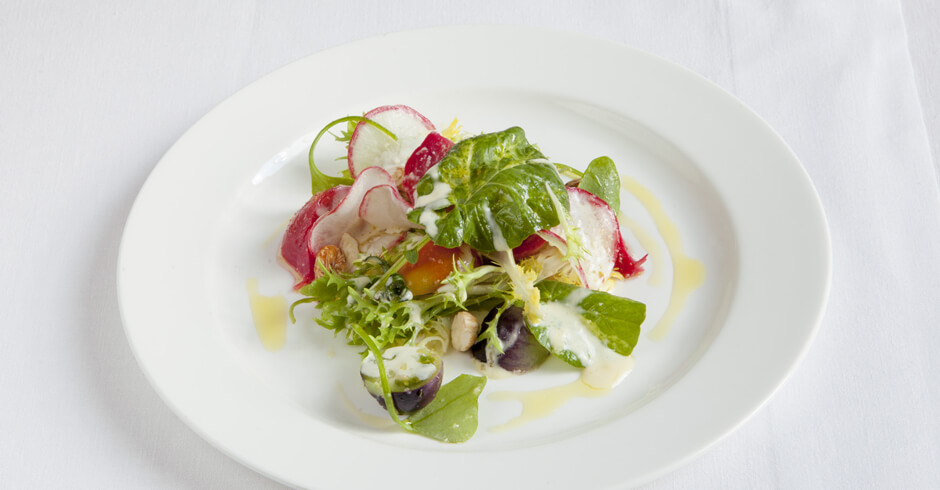 A Michelin star chef, a scholar and a pioneer of the plant-based food movement, with heavy involvement in President Obama’s council for health and nutrition – Dan Barber has become a household name. He has used his talent to educate and work toward a more environmentally conscious culinary world and is most well known for his incredible work at his innovative restaurants “Blue Hill” and “Blue Hill at Stone Barnes”.

Chef Dan Barber’s scholar side has allowed him to feature in some fascinating Ted Talks, where he chats about the new wave of “aquafarming” and a much-needed change of mindset in fine dining. Dan Barber often opts for championing vegetables in every meal, using meat and seafood as extra “flavours”.

Dan Barber is not only the head Blue Hill chef but also the co-owner and founder of the two Blue Hill establishments. Blue Hill first started in Manhattan, following the principles of Dan Barber and co-founder Michael Mazourek. The Blue Hill restaurants were named after the family farm belonging to Chef Barber and his brother.

Blue Hill in NYC has completely revolutionized the fine-dining game by ditching the tasting menu and opting for “family style” meals to commemorate the history behind the Blue Hill establishments. However, if you are looking for something more formal, Blue Hill at Stone Barns is a two-star establishment and opts for a more elegant and formal dining experience, right on the 80 acres of organic farmland from where the restaurant harvests its ingredients.

The Blue Hill foundation is more than just a Michelin star restaurant, it is a teaching experience with the goal to educate Americans about a lighter dining style, that truly emphasizes the importance of sustainable farming and organic produce. The meals are almost simplified, yet showcase the true technique and creative genius of a culinary master. Dan Barber fully immerses himself in this ethos, personally going to local farmer’s markets every morning to fully gauge the seasonal ingredients that are available.

It’s obvious that Chef Dan Barber’s cooking style takes after the “farm to fork” philosophy that has strongly defined fine dining over the last decade, but what has made Dan Barber truly unique is his take on food waste and the promotion of consuming the whole vegetable and animal.

At Blue Hill in Manhattan, every Wednesday night a pop-up restaurant that had the whole city desperate to get a table and enjoy Barber’s creative dishes called “WastED” came about in 2015. Barber and his team set out on a mission to gather all the waste at neighbouring restaurants, including juice bars and butchers, to use in their dishes of the evening.

Not only did the dishes feature food “waste”, but also the decor. A turnip root sits in a shallow glass of water as a table centrepiece, next to a candle labelled “beef” which is made from the remains of beef trimmings and fat. The walls are covered with a tarp used to protect crops and are usually discarded after a few uses. Their signature menu item is the beet burger that compromises of the leftover vegetable pulp from the juice bar next door, turned into a deliciously juicy burger and served with the “buts” of pickles thrown away by a local factory.

“Really good cooking is about utilizing unappealing ingredients out of economic necessity”. This is the method of Dan Barber and his revolutionary cooking style. The unappealing sounding menu items go by the names of “dog food”, “reject carrot mustard”, “mystery vegetables and peels” and “cuts of a waste-fed pig”. Some are pleasantly surprised and others may still not be able to get past the idea.

Dan Barber expressed to the New Yorker that the purpose behind this program wasn’t to impart guilt or shame on the American society about food waste and serve these dishes as a form of “punishment”. Instead, it aims to simply introduce society to a new way of cooking. He often refers back to the delicacies of the present coming from the food waste of the past. Lobsters, for example, were almost exclusively served to prisoners and sushi 30 years ago was considered an acquired taste.

When Netflix’s hit series “Chef’s Table” debuted in 2015, the second episode of the first season featured an hour-long episode about Dan Barber’s life and food philosophies. Chef’s Table gave credit where credit was due, and exposed chefs that may not have become household names yet. Since then, Chef Dan Barber’s TV personality shot up in popularity and many new followers and interested fans were eager to get a deeper look at the chef’s personal moments of success and failures.

Although the Blue Hill restaurants have been open since 2004, it was only in 2020 did Blue Hill at Stone Barns earn itself the coveted title of being a two Michelin Star restaurant. This restaurant is one of Chef Barber’s more pristine locations, where they focus on the “farm to fork” philosophy rather than the food waste one.

Blue Hill in NYC has also earned itself one Michelin star, despite the controversial pop-up kitchen and relaxed dining atmosphere. Dan Barber and his team turned trash into Michelin star food, which says a lot about the esteemed chef. It is no easy feat to convince Michelin that food does not need to be perfectly elegant and pristine to be awarded a star, and that’s exactly what Dan Barber did.

Along with the three Michelin stars, Dan Barber has also won an impressive six James Beard awards over the years – including being named the best chef in America in 2006 and most recently winning one in 2017 for leadership. This signifies the huge impact Dan Barber has had over the culinary world in the last two decades, and his legacy shall live in the incredible work he continues to pursue towards a more sustainable future.