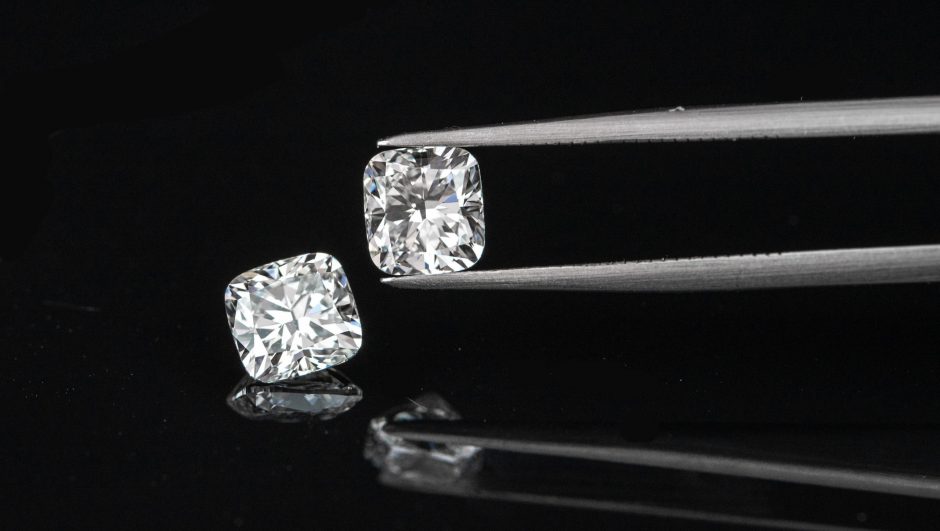 The cushion cut diamond is one of the most popular diamond cuts around – but what is it exactly?

A cushion cut means that your diamond carries some of the best fire (those flashes of coloured light that occasionally pass through the stone), as well as length-to-width ratios that are so varied that it becomes apparent that there’s no real template to cushion cut diamonds.

But at the end of the day, despite all their curves and edges, the cushion cut diamond truly is a beautiful stone that can turn any jewellery into a statement piece.

What Is A Cushion Cut Diamond? 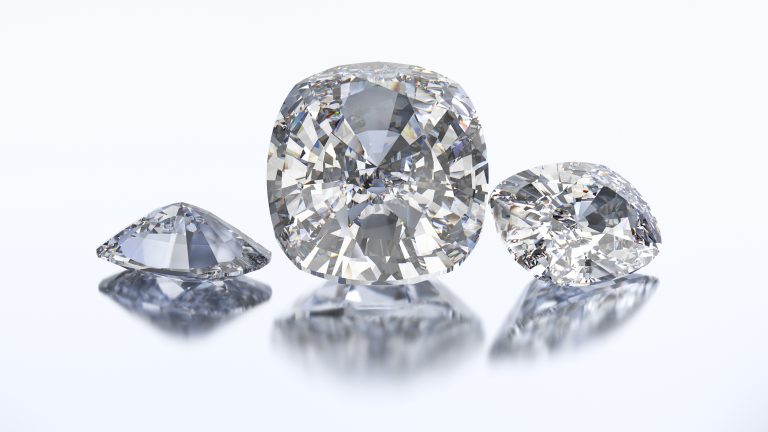 While there’s no real grading system for cushion cut diamonds, they can be defined as such: the cushion cut brings together the sleekness of a square cut diamond with the ethereal beauty of a round diamond. It has a soft square shape but with rounded corners, making it look similar to a cushion.

While it may be one of the most popular diamond cuts these days, the cushion cut has actually been around for over 200 years. However, back in the 19th Century, it was better known as a “mine cut”. The biggest difference between earlier mine cut diamonds and today’s diamonds is that they had 58 facets, while more modern ones have 64.

The Origin And History Of Cushion Cut Diamonds

Cushion cut diamonds date back to Brazil in the 1700s. During this time, most of the world’s diamond mining was centred in Brazil as the diamond reserves in India were starting to dry up. Diamond cutters in Brazil preferred the old mine cut as it was believed to maximise carat retention.

During the 19th Century, the old mine cut (as it was then known) became extremely popular, so much so that most stones, not just diamonds, were cut in this shape. The cushion cut became so universally loved that many of the world’s most famous diamonds, including the Hope Diamond and the Regent Diamond, are cut in early versions of the cushion.

The cushion cut that we know today developed out of the old mine cut. It’s design drew inspiration from the lesser-known candlelight, Peruzzi and table cuts. As technology progressed and diamond cutting tools got better, so too did the quality of modern diamond cuts.

What Are The Different Kinds Of Cushion Cut Diamonds?

There are several subcategories of cushion cut diamonds, all of which are breathtaking. These include:

Square cushion cut: Just as the name implies, the square cushion cut diamond has sides that are all equal in length, making it look like a geometric square. This cut has rounded corners instead of sharp ones.

Elongated cushion cut: Also known as the rectangular cushion cut, these diamonds have an elongated shape that is set vertically. The length is always taller than the width of the diamond.

Antique cushion cut: These days, any diamonds that are described as being a “true antique fashion cut” are ones that have been hand cut. This was the tradition back in the 19th Century and while they might not be as shiny as the cuts we know today, they carry a great deal of historical value in them.

What Are The Pros And Cons Of Cushion Cut Diamonds?

As is the case with all diamond cuts, there are pros and cons to a cushion cut diamond. The pros include the fact that this cut naturally carries with it a high level of brilliance and fire, meaning that it reflects both white and coloured light very well.

What is a Radiant Cut Diamond? History, Pros & Cons

Furthermore, cushion cut diamonds are all unique, so each piece of jewellery made with them will truly be one-of-a-kind. In addition to this, the stone’s rounded edges make it more durable.

The cons of a cushion cut stone include the fact that it is an open table, which makes imperfections easier to see. This cut also retains colour better than other shapes, so you need to be very selective about the colour grading you opt for if you want a clear diamond.

What Are Reasons Not To Buy A Cushion Cut Diamond?

Whether or not you buy a cushion cut diamond depends entirely on your preferences. However, many believe that the most common reason to avoid buying cushion cut diamonds is the fact that there are so many variables that come with this particular cut. Such as pattern play and rations, which often differ from stone to stone. This can make it challenging for engagement rings especially, as the diamond setting may be tricky to navigate if the stone isn’t symmetrical.

How To Choose A Cushion Cut Diamond

There are numerous factors to consider when choosing a cushion cut diamond, but one of the most important ones is the fact that this cut is notorious for retaining colour.

Experts recommended that when choosing a cushion cut, you make sure it’s graded at least H or better for its colour. H diamonds aren’t actually colourless, but they are considered to be “near colourless”.

What Are The Common Ring Settings For Cushion Cut Diamonds?

Cushion cut diamonds are incredibly popular stones, so they often feature in engagement ring designs. Perhaps the most common setting for a cushion cut stone is the halo, as this gives the diamond the perfect positioning in a ring – front and centre.

How Much Are Cushion Cut Diamonds?

There are several variables that affect the price of cushion cut diamonds, many of which are dependent on the quality of the stone itself, as well as where it was sourced and where it falls on the colour scale.

What Does A Cushion Cut Diamond Say About You?

When you rock a cushion cut diamond, you’re letting the world know that you value tradition and elegance. The cushion cut has long been synonymous with royalty, after all!

While the cushion and princess cuts are quite similar in appearance, the main difference between the two is that the former has softer edges, while the latter’s edges are straighter.

How Popular Are Cushion Cuts In The US And Around The World?

To this day, the cushion cut diamond remains a firm favourite for engagement rings, earrings, pendants and more, in all corners of the globe.

Now you know what they are, you might opt for one too!