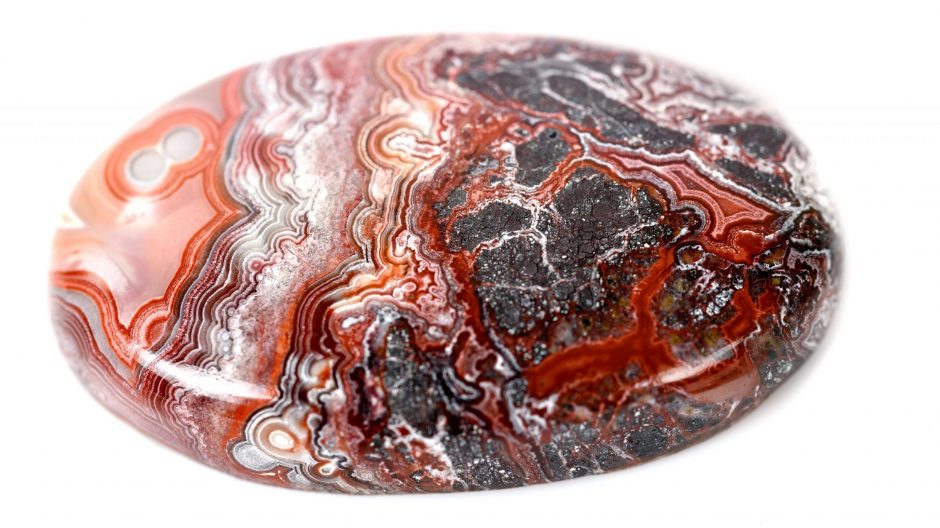 Mexican crazy lace agate stones are one of Mother Nature’s finest creations. With intricate patterns and beautiful colouring, these gems are eye-catching and unique.

Crazy lace agate has powerful healing properties that are still relied on after hundreds of years. It’s also considered to be one of the earth’s youngest minerals in comparison to others.

Curious? Learn more about this type of lace agate and what it has to offer.

What Is Crazy Lace Agate? 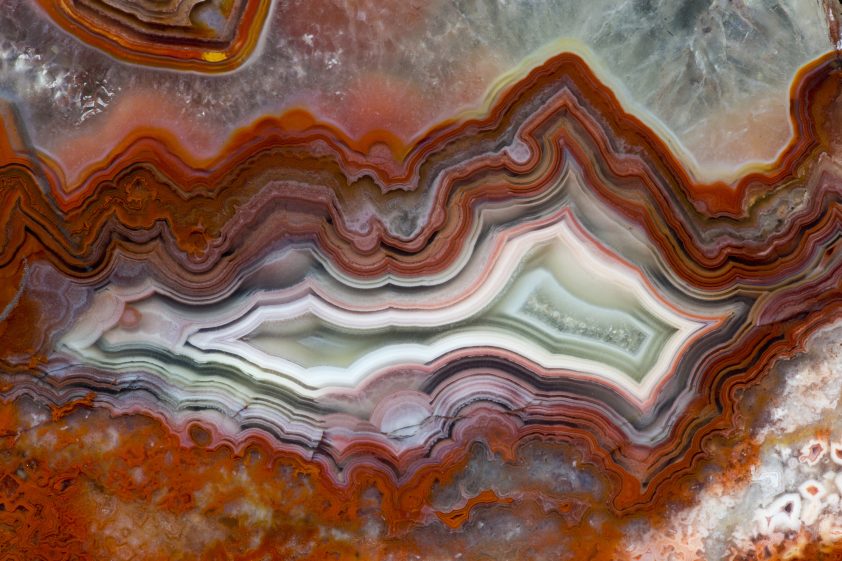 Believed to have formed in the cretaceous period roughly 65 to 90 million years ago, crazy lace agate is a banded chalcedony or microcrystalline quartz mineral infused with iron and aluminium.

It’s a unique stone in that it’s often brightly coloured and filled with ornate, intricate patterns. The most common colours associated with the stone are browns, greys, black and golds. Occasionally, pinks and reds are also found swirled together to create a truly eye-catching red gemstone.

Where Is Crazy Lace Agate Found?

Agate is found all over the world. However, the wildly decorated crazy lace agate is predominantly found in northern parts of Mexico. Specifically, the stone is found within the area known as Chihuahua.

What Is The Meaning Of Crazy Lace Agate?

Almost every gemstone has a special meaning attached to it, and Mexican crazy lace agate is no different. The stone carries very strong energies that quickly transfer to its bearer.

Crazy lace agate is a stone of happiness. In fact, in several parts of the world, it’s actually referred to by two other names: The Laughter Stone’ or “Happy Lace”.

While its energies may be strong, the stone is soothing and energising as it vibrates at a lower frequency than other gemstones. This property helps its bearers remain grounded. Furthermore, crazy lace agate is used for balance and protection. It wards off the evil eye to bring its bearer joy and absorb any emotional pain or turmoil, as well as help its bearer go with the flow when times are challenging.

What is Botswana Agate? Gemstone Guide with Meanings & Properties

What Is Crazy Lace Agate Worth? 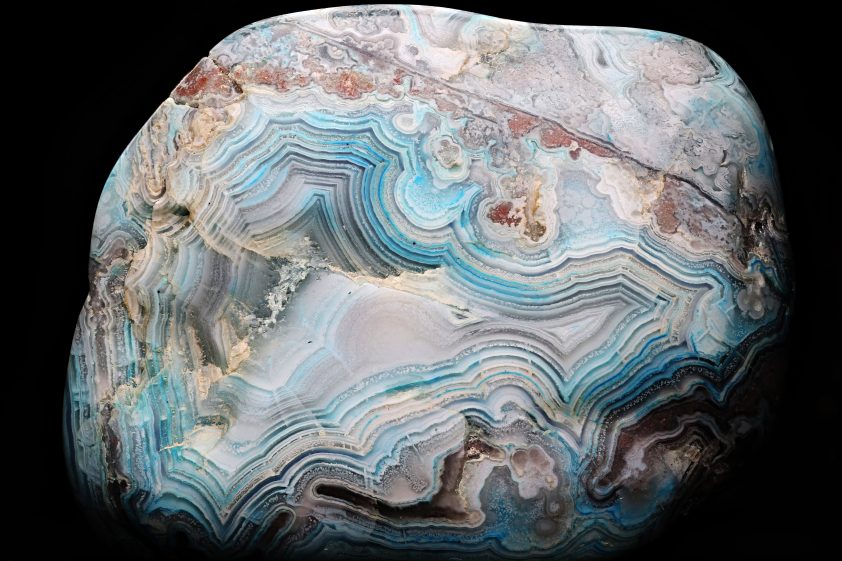 The worth of a gemstone is determined by a number of factors, including the size of the stone, how easily it’s found and mined, and its rarity.

In general, the value of any agate stone is quite modest as there is certainly no shortage in supply when compared to other gemstones. The price of agate stones is mainly reflective of labour and artistry, rather than the value of the stone itself.

However, crazy lace agate is more valuable than other kinds of agate more commonly found all around the world. These stones can generally sell for a few dollars, but crazy lace agate could sell for a bit more, owing to the fact that its main source has been traced back to the northern Mexican area of Chihuahua.

What Is Crazy Lace Agate Good For?

Crazy lace agate is an excellent stone for physical healing. Similar to other agate stones, it’s used more in a preventative way by building up stronger immune systems and keeping bearers healthy. It’s also believed to protect you from any interfering or outside energies, enhancing your grounding.

Mexican crazy lace agate’s other healing properties are quite extensive and include:

Aside from the physical, mental and emotional benefits of crazy lace agate, the gem is believed to help its bearer rid themselves of attachments that no longer serve them, encourage clear decision making and enhance creativity.

What Chakra Is Crazy Lace Agate?

Mexican crazy lace agate is associated with the third eye chakra – the one that’s responsible you’re your sense of consciousness and perception, as well as the crown chakra, which is the source of spiritual belief and spirituality. In essence, these chakras speak to inner enlightenment and spiritual significance.

Crazy lace agate is classified as a companion stone. Apart from protecting you from bad energies, it’s said to be able to get rid of any stress and tension that you may be carrying around. Plus, it serves as a reminder of how it feels to be loved and comforted, so it makes a great gift.

With the help of a crazy lace agate stone, bearers can find their true selves and forget all the chaos that’s going on in the rest of the world. And who doesn’t need that!?

The gem can stabilise your aura and rid you of negativity, which goes a long way in terms of cleansing, restoring and regenerating natural cycles.

How To Identify Crazy Lace Agate 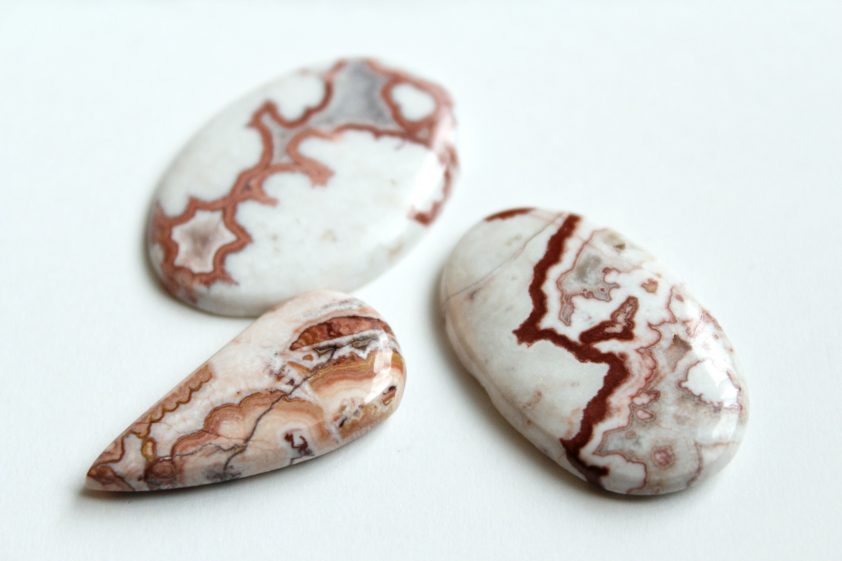 Because of its unique patterns and colours, identifying crazy lace agate is quite easy. The stone is characterised by its orbs and waves that present in a variety of strong colours, including:

Its combination of different patterns and colours help differentiate it from other agate stones.

How To Care For Crazy Lace Agate

Caring for crazy lace agate is a fairly easy task. The stone can be cleaned using warm soapy water and a soft brush, then simply dried off gently with a cloth. Try to avoid using harsh chemicals when cleaning your stone as this can damage or stain it.

Fabulous Fire Agate: Meanings, Properties & How to Use This Fiery Gem

Agate is quite a hard stone and is fairly resilient, but it can still be scratched or damaged by gemstones that are heavier and harder. Take extra care when storing the stone, as other materials with a higher level of hardness could potentially break it.

Additionally, be sure to keep Mexican crazy lace agate away from heat or prolonged exposure to the sun as this could lead to its colours fading. Instead, wrap it in a soft cloth or store it in a box lined with fabric.

As a colourful, unique and durable stone with plenty of healing benefits, crazy lace agate will make for a fantastic addition to any collection.

The Power of Agate Stones

There are plenty of other fascinating types of agate to learn about. Discover more about the agate stones below: