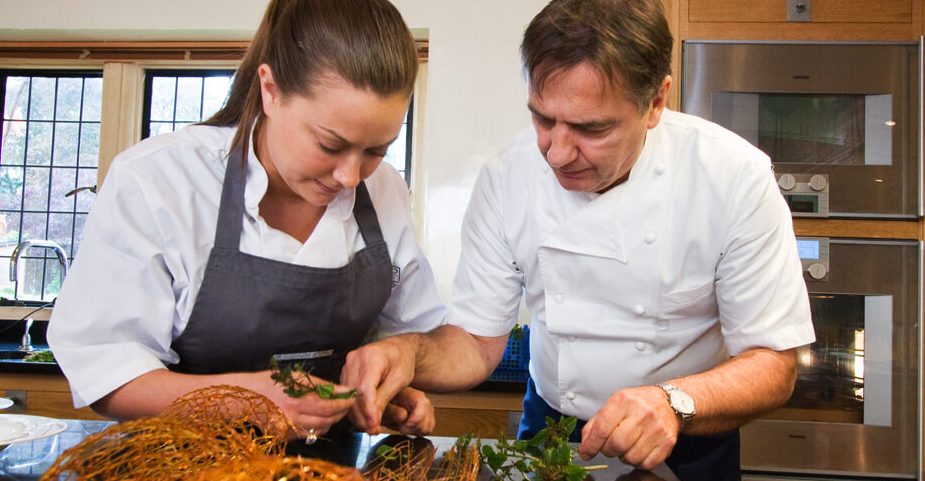 For many of us, cooking is a frequent necessity or a pastime we get to indulge in during the evenings and weekends. Chefs however – especially those aiming for Michelin star success – spend virtually the entirety of their waking lives in the kitchen, and in some cases that might even be from 7:15 in the morning to 1am the next day.

Fortunately, if one wanted to experience what it might be like in a Michelin star kitchen, one wouldn’t have to go through such rigors, as there happens to be a wealth of chefs that are, shall we say, in their advanced years and are ready to pass their knowledge down to the next generation of chefs.

Chances are you’ve heard of celebrity chef Mr Wareing. The double Michelin star chef learned a good deal of his trade under the tuition of Gordon Ramsay, before furthering his career alongside Guy Savoy and Daniel Boulud. Perhaps better known for those that have taught him rather than those he’s influenced, Wareing is credited with giving Angela Hartnett her first role, and has had his opinion called upon for the TV show Masterchef.

Paris House is best known for its big nod to retro cuisine. Classics such as shepherd’s pie and paella are staples of the restaurant’s menu, though no kitchen ever got a Michelin star without putting a unique spin on them here and there, and Paris House is no exception. Michelin star chef Phil Fanning is at the helm of kitchen duties, and is ready to give you a masterclass on the secrets used to create the perfect retro dish.

Anglophile, two Michelin star chef and culinary instructor Raymond Blanc has been churning out stellar chefs left right and centre for quite some time. Heston Blumenthal, Michael Caines and Marco Pierre White, to name a few, have honed their craft under the wing of Blanc. His Cookery School at the Michelin starred (not to mention weak-at-the-knees beautiful) Manoir Aux Quat’Saisons is an institution in of itself, where students can gain an insight into the goings on inside a haute cuisine kitchen while in the hands of the hotel’s experienced chefs.

Rene Berard: An Escape in Provence 2015

Provence is the ideal location for a culinary adventure, and Rene Berard is the ideal person to tour it with. Berard, if you hadn’t heard, is the Michelin star chef behind ‘cusine of the sun’ – a culinary manifesto based on the Provençal seasons. Berard has spent many a season in the kitchen himself, and is deemed a venerable force among his peers. Take a metaphorical tour of the markets of Provence as Berard shows you how it’s done in his own kitchen.

The Relais Il Falconiere is in the Tuscan foothills and near to the town of Cortona. Indeed, it is the Relais’ remoteness and surroundings that make it such an attractive place to spend some time. Not only does the Michelin star chef, Riccardo Baracchi, conduct masterclasses from the hotel’s kitchen, but if you play your cards right he might just tour you around his private vineyards, too.

Serge Gouloumès was awarded his first Michelin star in 2005, four years after opening his restaurant Le Mas Candille in Mougins, Cannes. Something of a masterchef, Serge has gone on to teach in culinary schools in Japan and Ireland. For those tempted to visit charming Mougins, he’s on hand to teach guests a thing or two about culinary practice by conducting sessions in the kitchen and taking groups out to visit the Cannes marketplaces.