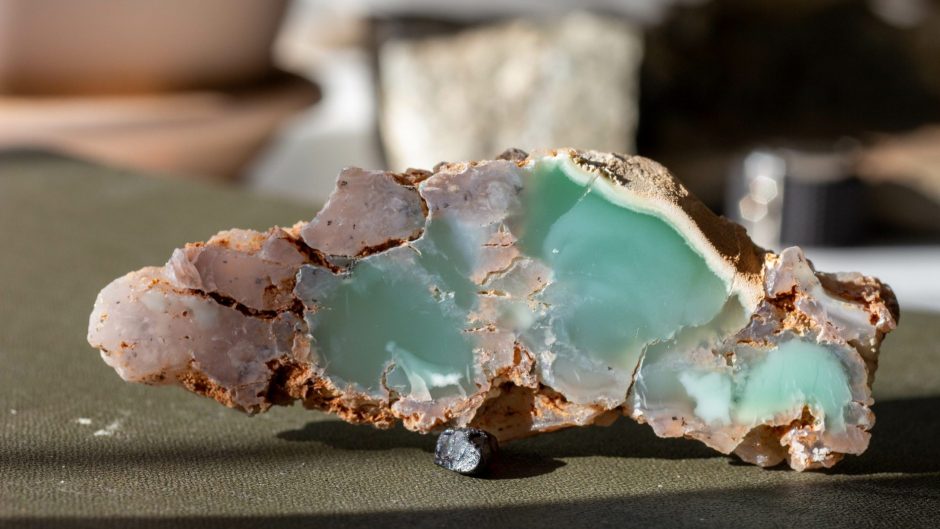 If chrysoprase has made its way into your life, it can be an indication that you need an emotional makeover. Sometimes called the “stone of Venus”, this gemstone has a reputation for bringing happiness, joy, and optimism wherever it goes. You could see it as the antidepressant of the crystal world!

Find out everything there is to know about chrysoprase stone, from its various meanings to the different types chrysoprase, to how much this vibrant green gemstone is worth.

What Colour Is Chalcedony? 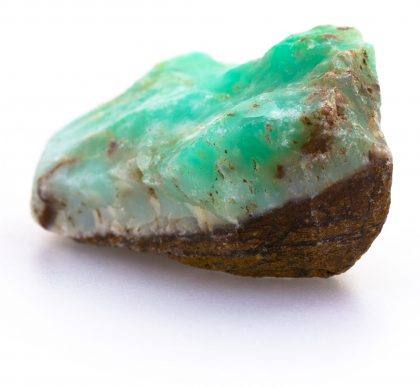 Chrysoprase is the name for a translucent variety of chalcedony that ranges in colour from yellow-green to a more apple green. In fact, the meaning of chrysoprase comes from two words – chrys being the Greek for ‘gold or yellow’ and prase from the Greek for ‘leek’. This golden apple or golden leek green colouring is generally caused by traces of nickel.

Chrysoprase is the second-most-valuable chalcedony, after gem silica. These days, the stone is generally used for creating cabochons and making beads. More singular pieces are occasionally cut into faceted stones.

How Is Chrysoprase Formed?

Chrysoprase stones result from the lateritization or deep weathering of nickeliferous serpentinites and other ultramafic ophiolite rocks. In the deposits in Australia, it occurs as nodules and veins with brown goethite and other iron oxides forming below iron and silica caps that are rich in magnesite.

Where Is Chrysoprase Found?

You will find chrysoprase stones worldwide, with deposits in Australia, Brazil, Central Europe, North America, and South Africa. It’s sometimes referred to as “Australia jade” because of its prominence in Western Australian mining and how closely its colour resembles that of the vibrant East Asian stones.

How Can You Tell the Difference Between Jade and Chrysoprase?

While it has the nicknames of “jadine” or “Australian jade,” the gem’s chemical formula and crystal structure are very different from jade. There are numerous ways to tell these two gemstones apart.

One is via their specific gravity, with chrysoprase at between 2.59 and 2.61 and jade, ranging from 2.95 to 3.43 depending on the variety. They also have distinctive refractive indexes. Chrysoprase is at between 1.530 and 1.543 and jade measuring in at more than 1.6. 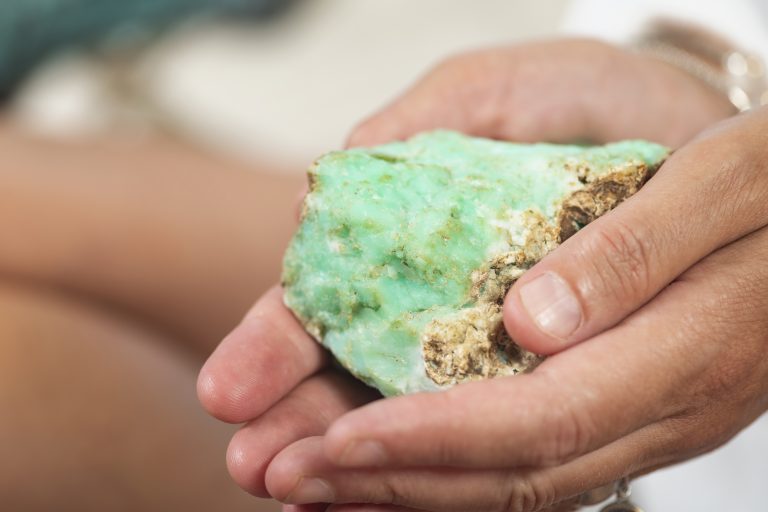 Chrysoprase is one of the chalcedony quartz group’s rarest and most valuable stones. This is quite a distinction when you consider that this species includes agate, bloodstone, carnelian, jasper, and onyx! Not only is chrysoprase the best-known variety of chalcedony, it has its own variations for you to explore. Bear in mind that the deeper the shade of green, the pricier it will be.

Apple green chrysoprase is the most popular variety due to its distinct green shade. It’s believed to be great for individuals who have problems articulating their thoughts and feelings and for closed-minded people.

These gemstones are also a wonderful apple green and come to us from Australia’s Central Queensland Marlborough mines. They are rare and highly prized thanks to their fine colour and translucency.

This is the lightest of the chrysoprase variety and features black, green, and white spots. It’s a unique gemstone and has a huge variety of colour, with the most popular being apple green and olive.

People use this deep green stone in lapidary and ornamental works and have done so for many years. It exhibits light and dark shades of greens with blue and black also visible. It’s mined in Rajasthan and other parts of India.

Lemon chrysoprase is sometimes referred to as olivine. These gemstones are a unique mix of a variety of chalcedony, magnesium, and nickel.

These stones have webs of black, green, grey, yellow, and white colours in them and are idiochromatic. This type of chrysoprase jewellery is very popular worldwide.

What Is Chrysoprase Used For? 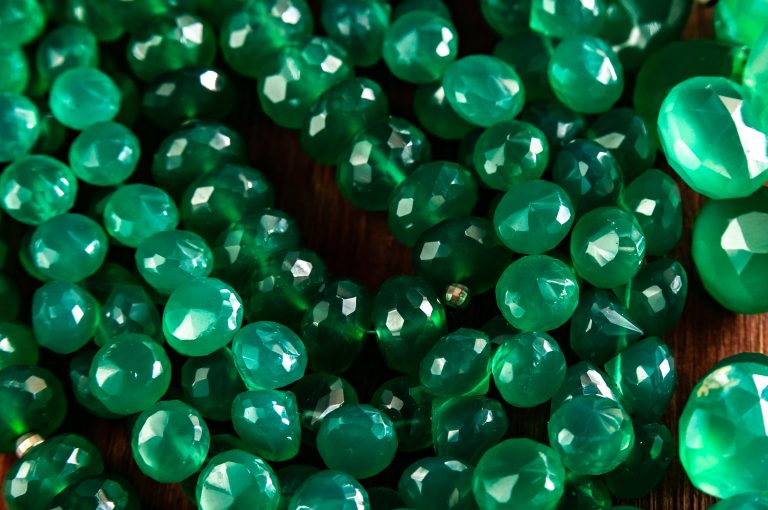 Not only is chrysoprase beneficial and easy to wear, but it also works perfectly in a range of different types of jewellery, from bangles and brooches to earrings and pendants. For more metaphysical uses, chrysoprase is worn or placed somewhere visible to generate a calming, rejuvenating energy.

Historically, people in the middle ages used to think they could become invisible by putting a chrysoprase stone in their mouth. It was also thought that it would lose its colour in the presence of poison.

Because it’s a variety of chalcedony, chrysoprase is not a wildly expensive gemstone. When you’re buying chrysoprase jewellery, you’ll be paying as much for the quality of the craftsmanship as you will be for the stone. And if you buy unset stones, you’ll find them an inexpensive addition to your collection.

How Can You Tell If Chrysoprase Is Real?

As is the case with many semiprecious stones, the best way to tell if chrysoprase is genuine or manufactured is to look for tiny imperfections and small inclusions throughout. If there are none, the stone is either an imitation, treated in some way, or very valuable.

What Does Chrysoprase Symbolise?

Chrysoprase is one of the birthstones for May and traditionally symbolises enterprise, happiness, and prudence. The chrysoprase stone is famous for being able to improve emotional health. It is said to promote empathy, forgiveness, growth, self-love, and a general lust for life.

What Are the Healing Properties of Chrysoprase?

Emotionally it is believed to help heal broken hearts by equalising the wearer’s emotional balance and fostering an ability to accept change. It’s also associated with increasing tolerance of others and providing gentle boosts to self-esteem.

Which Chakra Is Chrysoprase Linked To?

Chrysoprase connects to the heart chakra and shares its colouration. People with an overactive heart chakra are said to be overemotional and dramatic, while those with an underactive one can turn bitter, cold, and unfriendly. Some say you can use the stone to heal feelings of resentment and blockages occurring in the heart chakra. Chrysoprase is also known as an aid for various emotional concerns linked to kindness and love.

As a gemstone with links to the netherworld, chrysoprase is so much more than a coloured variety of chalcedony. It is one of the oldest semi-precious stones used by man, favoured by Greeks, Romans and Egyptians to make seals, jewels and other objects.

If you suffer from increasingly common emotional afflictions chrysoprase could be the prescription you need for a more positive worldview. If not for its healing properties, then at least for its vibrant and joyful apple-green colouring!