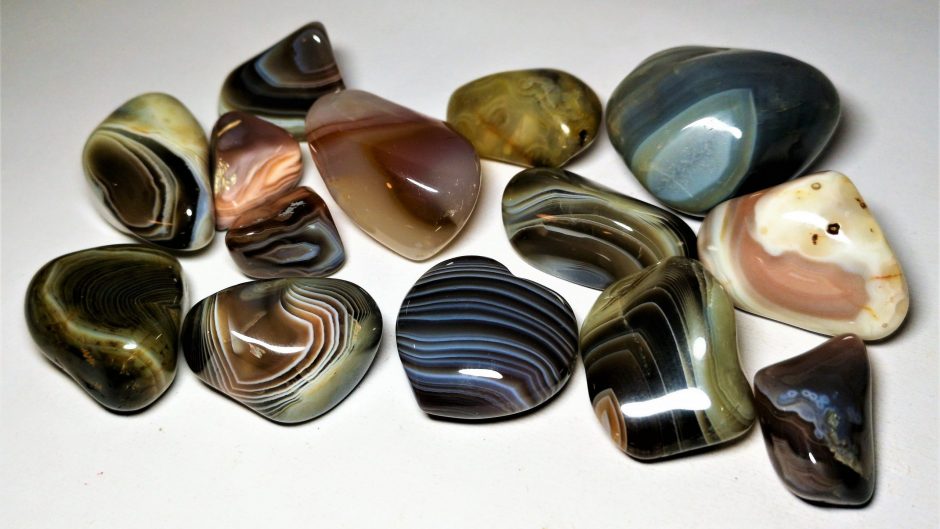 Sometimes referred to as “The Stone Of Change” Botswana agate is a stunning stone with a myriad of powerful properties. The most royal of all the agates, this gem is famous for its distinctive white bands and subtle, earthy shades.

Join us as we learn more about Botswana agate, and discover why this stone is one you need in your life!

What Is Botswana Agate? 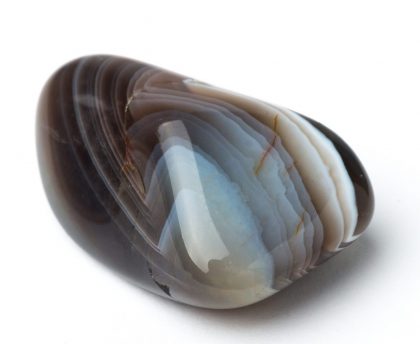 Botswana agate stone is a variation of banded Chalcedony, one of the Quartz family minerals. It’s mainly striped in different shades of pink and grey, but you may find certain layers containing muted apricot and browns.

These stones are highly regarded as an influence to stabilize and strengthen. It’s said to be perfect for balancing emotional, intellectual, and physical energy. It’s all said to help harmonize yin and yang, the universe’s positive and negative forces.

Where Does Botswana Agate Come From?

Found in the mines of Botswana, this is where this banded agate gets its name from. Botswana is a landlocked country in the centre of Southern Africa. The roughly triangular territory is about 600 miles from north to south.

How Is Botswana Agate Formed?

The volcanic activity responsible for these beautiful stones dates back to nearly 200 million years ago. But, while Botswana’s igneous stones started off as volcanic flow, they didn’t originally come from your standard mountainous volcano.

In their case, the lava flowed out in waves from long faults found within the lower layers of rock and rolled from here across the landscape. Layers of Silica and Quartz were thus created, making for the fine banding and patterns of Botswana agate colours that make them so unique.

How to Tell If a Botswana Agate Is Real

A great place to start when you’re looking to differentiate between a genuine stone and a fake is the Botswana agate colours. These gemstones are famous for their hues, with real ones very brightly coloured and fake ones lacking this radiance. The bands will also be very obvious in authentic stones since they are the only banded form of chalcedony in existence.

Agates are hard, too, with their lookalikes giving off a softer texture. Real stones should be very easy to tell apart from forgeries when you examine the touch. Imitations will scratch easily, while originals remain unharmed, and the surface of a good agate will appear vivid and flawless.

Fake agates are also more transparent than their original counterparts. A slightly chaotic surface with a visible water line will confirm that your gemstone is a genuine one. Synthetic agates are very translucent, and this quality alone is often enough to identify them.

Meanings and Powers of Botswana Agate

Botswana agate colours envelop the viewer or wearer in gentle greys, browns, and pinks. It’s believed to be a comforting, protective stone that can bring comfort to the lonely or solace to the grief-stricken.

The stone’s associated quiet energy is said to be useful for centring oneself during mediation. Some say it gives you the love and strength you need to look for answers rather than dwell on your difficulties.

What Are the Healing Properties of Agate? 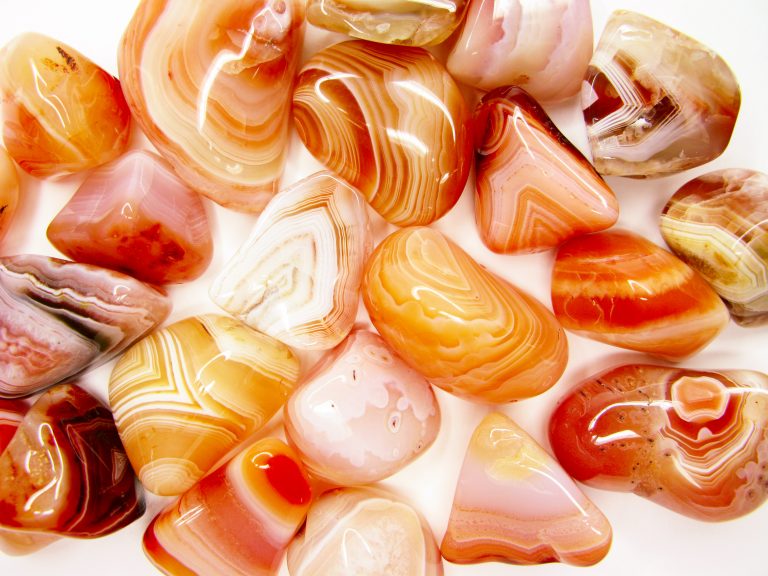 The formation of what looks like an eye in the Botswana agate stone is not only thought to be protective but lucky, too. Think about holding on to it when you’re choosing lottery numbers, or whenever you need an extra dose of good fortune.

This special stone is said to promote feelings of composure, inner stability, and maturity. Its protective, warm properties encourage security and self-confidence.

Some say it offers excellent support for those looking for love. Invoking its power will assist in finding someone in tune with the wearer, and hopefully, someone who shares their dreams.

This stone is also known as a receptacle for negative energy, toxicity, and unpleasantness, so it’s a good idea to grid them around your house. It’s said to prevent out-of-body visitations from malicious entities and turns unwelcome visitors (in this dimension or the next away) from your door!

What Chakra Is Botswana Agate?

This banded agate is associated with the base or root chakra. This particular chakra is connected with the foundation of physical and spiritual energy for the body. Because of this connection, Botswana agate is used to help those feeling physically or spiritually out of balance. By balancing the base chakra, Botswana agate is said to bring the body energy, a sense of security and power.

What Is Botswana Agate Good For?

Botswana agate colours are comforting, protective, and soothing. These are the very same properties the stone affords its wearer. It’s said to be a wonderful solace to lonely people or anyone grieving a loss. It’s also believed to be a useful tool to aid meditation, mindfulness, and yoga, and will spur you on to find solutions to your problems.

This banded agate is famous for its beauty, long history, and its scarcity. Found mainly in the Bobonong district of Botswana, the government has imposed an official ban on all rough gemstone material in the country. This means that it must get cut and polished before it goes anywhere, making high-quality rough agate a very scarce commodity.

Also see  What is Moss Agate? Meaning & Uses for this Special Green Gemstone

Your Botswana agate stone is fine for wearing underwater and is in fact recommended if you’re using it to stop smoking! To increase success, drink an elixir first thing every morning which you make by soaking the crystal in water for a couple of hours.

And if you’re going to be working with it in any way, make sure that you cleanse it first. Run it underwater and ask it to release the energies that it has previously stored.

How to Wear Botswana Agate 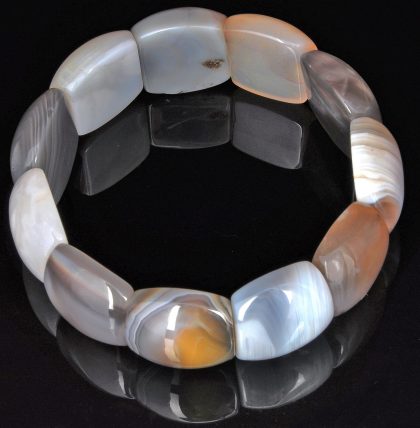 The Botswana agate stone is particularly suited to bracelets, and the wearer will enjoy all its properties this way. It’s also a fantastic protective agent against fire. You can carry it with you in your pocket or purse if you work anywhere where this danger may lurk, or place the stones inside your home to protect it.

How Can I Use Botswana Agate in My Home or Office?

Put this banded agate inside doorways and entry points into your home and property. This way it is said to not only disperses negative energy but also create a shield protecting you from harm entering your field of energy. Let the calming Botswana agate colours help you find your centre, find silence throughout your day, and invoke peaceful sleep at night.

Whether you wear it, place it in your home or even around your garden, Botswana agate is a wonderful stone. It’s not just aesthetically appealing, it’s rich in meaning and properties too!