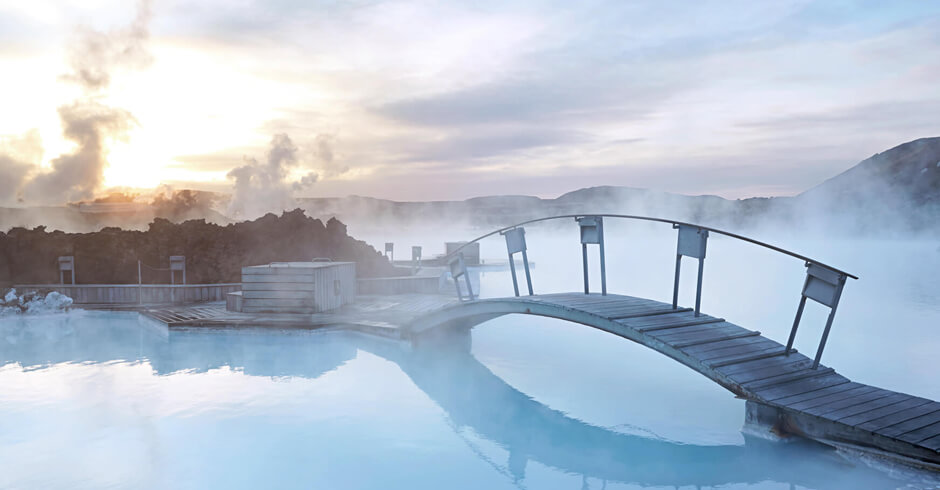 As you float in a turquoise pool of mineral-rich geothermal seawater you feel your muscles completely relax as your breathing slows down. The water simmers at 37 degrees celsius – just the right temperature – and the sound of the cascading waterfall soothes you. You let all of your tensions melt away as the hot water envelops you.

Welcome to the Blue Lagoon Iceland – a geothermal pool set within a lava field in Grindavik on the Reykjanes Peninsula.

What Makes Blue Lagoon So Enticing?

The Blue Lagoon was voted by readers of Conde Nast Traveller magazine as the top resort in Europe for 2019. But what is it exactly that makes Iceland’s most recognisable attraction so extraordinary and unique from other spas?

Firstly, from a healing perspective, Blue Lagoon is remarkable in its own right. The water is so incredibly rich in minerals because it is pushed up to the surface through several layers of rock under the ground.

The lagoon’s unearthly blue and milky waters contain silica known to soothe and, in some cases, dramatically alleviate the symptoms of skin conditions such as psoriasis, which affects 2-4% of the world’s population. On top of that, the naturally occurring algae contain nutrients that improve and revitalise the quality of the skin. Bathers will commonly slather on mud from the poolsides to help cleanse the skin’s pores.

Secondly, there’s nothing quite like it. Blue Lagoon is a geothermal spa, which means it relies on the heat produced under the Earth’s crust to warm its waters. The water is used to generate heat and electricity, then it is pushed through to the lagoon where you can bathe in it.

Also see  5 Reasons to Fall in Love with Cornwall

Iceland is an isolated body of land occupying two oceans and surfaces the Mid-Atlantic Ridge – a gap between the North American and Eurasian tectonic plates. Iceland is one of the handful of islands to do so, and it is this portion of the ridge, the Reykjanes Ridge, which is responsible for the island’s tectonic activity. As the plates move apart and the Reykjanes Ridge widens, the heat from the exposed magma warms the seawater above it. This seawater is channelled and pooled, and by this point is a comfortable 39°C – right on the sweet spot for visiting bathers.

Blue Lagoon is situated amidst encrusted lava fields and surrounded by (mostly) dormant volcanoes. Iceland, in general, is an incredibly tectonic area, containing around 130 volcanic mountains, and the landscape has beautifully sculpted as a result. Even at the time of writing, the volcano Bardarbunga continues to spew fountains of lava, which makes for quite a spectacle, especially against the backdrop of the Northern Lights.

Other Geothermal Spas in Iceland

The Blue Lagoon isn’t the only geothermal pool you can visit in Iceland – there are in fact several beautiful places to bathe thanks to the abundance of volcanic activity. You could take a drive to Reykjadalur, which means “Steam Valley” and is near a small town only 45 minutes from Reykjavik. You will need to take a 1-hour walk until you find this warm river where you can bathe in the geothermal waters.

Another amazing spot to soak in the hot water is Landmannalaugar, which is located on the edge of a lava flow from the 15th century. The geothermally heated water merges with a separate spring of cold water, so you can enter into the water on the cold side and then walk upstream until you find a spot where the two flows mix at just the right temperature.

Or, you could travel to Leirubakki, which is one of the few farms that dot the foothills of Hekla – a 1500 m high volcano that has erupted several times since the Vikings settled here in the 9th century. There is a tiny sunken pool here that is just big enough to fit four people and is lined with blocks made from cut lava. 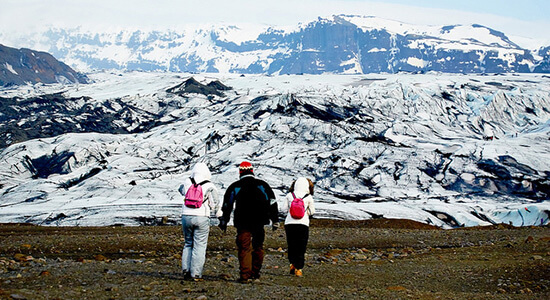 These are just a few of the amazing geothermal pools in Iceland where you can enjoy the sensation of soothing your muscles in piping hot water while admiring the beautiful rugged geography of this fascinating land. For even more natural wonders, read our roundup of the best hot springs around the world.