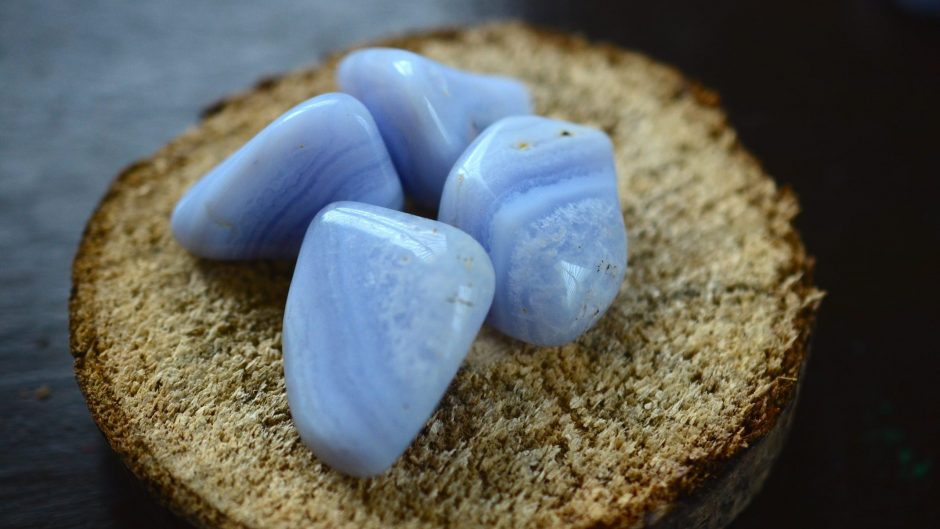 As a member of the expansive agate family of gemstones, blue lace agate is quite a hard stone and measures high on the Mohr scale. While extremely durable, its light blue colouring gives it lovely soft, soothing elements reminiscent of perfect sky-blue waters.

Blue lace agate stones have plenty of meaning and healing properties. They have been used to promote positivity for hundreds of years.

Join us as we take a closer look at blue agate crystal, its origins, properties and meaning.

What Is Blue Lace Agate? 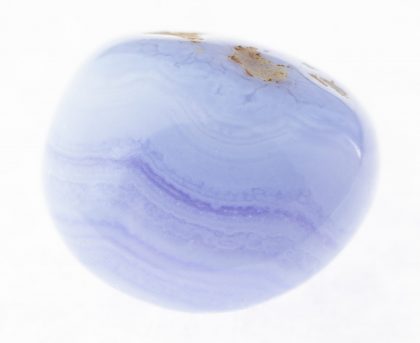 Just like every other member of the agate family, blue lace agate is a variety of banded Chalcedony and a quartz mineral. The gem has bands of layers of blue, most of which vary in hues from very light to bright almost sapphire blue. Occasionally, these stones also contain threads of brown.

Agate stones are sometimes called ‘the earth rainbow’. In its various forms, the colourful bands in nature created nearly every colour that the earth can produce.

Historically, agate stones have been discovered amongst the artefacts of the Neolithic people and are known to have been used for the purposes of healing and ornamentation.

Where Is Blue Lace Agate Found?

Blue lace agate was first discovered in Namibia and the country is still where most natural variants of the blue agate stone are mined. However, it has also since been discovered in parts of India, South Africa, Brazil, China and in a few places throughout the United States of America.

An alternative to natural blue lace agate was developed in Germany in the 16th Century. In this case, dyeing techniques dye lighter or colourless stones in the likeness of blue lace agate. The stones are then used in the manufacturing of jewellery.

Other agate stones are available in abundance, but blue lace agate is relatively rare and becoming increasingly difficult to find. A few years ago, it was believed to have been almost completely mined out. However, there has been a recent discovery of the gems in South America.

As jewellers are finding it harder and harder to source blue lace agate, they are turning to dyed stones for a similar and more affordable effect.

What Is The Meaning Of Blue Lace Agate?

Blue lace agate has several meanings that contribute to it being such a sought-after gem.

For one, the colour of the stone is representative of feelings of calmness and tranquillity. It’s also cool to the touch, which many believe will aid in helping the stone’s bearer keep a cool and calm head.

The stone also has a number of other meanings, many of which have to do with a sense of renewal. These include:

What Is Blue Lace Agate Good For? 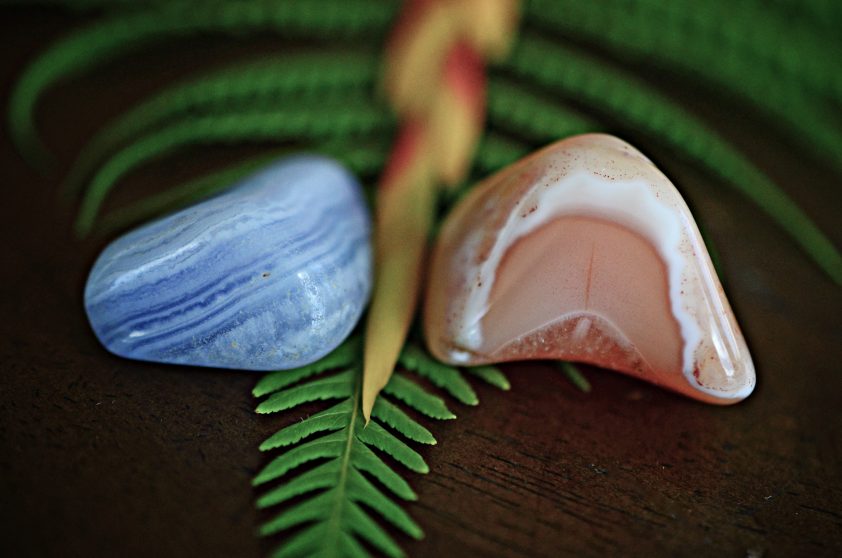 Blue agate crystal offers its bearers ‘emotional facelifts’. The stone is used as a means of healing and building strong emotional health in order to keep physical health in check.

This crystal is linked to the heart chakra, which helps all of us open up our energy levels to giving and receiving unconditional love. This is referred to as ‘the ultimate penicillin for soothing the pain and confusion that comes with the human condition’.

It’s believed that blue lace agate is a symbol of freedom and serenity, which lowers stress levels and in turn, can boost your immune system. For those who suffer from stage fright, hate public speaking or feel they are lacking in confidence, blue lace agate is recommended. It’s said to help you verbalise yourself properly and communicate effectively by removing all stresses associated with communicative blockages.

In terms of physical health, blue lace agate is believed to help cure any ailments of the throat. It’s said to be able to calm and cool down the fiery burning of an itchy or scratchy throat.

What Chakra Is Blue Lace Agate?

Aside from the heart chakra, blue lace crystal is strongly connected to the throat chakra. The stone is often worn or kept in a pocket by public speaking professionals or those who require extensive use of their voices, such as singers, actors and musicians.

The stone is said to release any fears of performing in front of others. It helps improve articulation, send calming energy to one’s nerves and improve the clarity of one’s mind, aiding in concentration and helping them to think fast on their feet.

Plus, it helps to open up the flow of any under-active chakras and aid when it comes to over-active chakras. By balancing the energies, lace agate can help to heal children who are hyperactive or loud.

Also see  Fabulous Fire Agate: Meanings, Properties & How to Use This Fiery Gem

Blue lace agate is one of the most beneficial crystals for anyone battling with thoughts in meditation or overthinking. The stone’s soothing energy helps to ease overactive minds.

How To Use Blue Lace Agate

Blue lace agate can be used in a number of ways.

You can display it in a common room or area in a house to aid with effective communication between people. Or you can carry it in your pocket if you have to speak or perform in public.

Perhaps the most effective way to use blue lace crystal is by wearing it in or as a pendant around the neck or as close to the throat chakra as possible. This will go a long way in making sure that the crystal works best alongside the chakra.

Overall, lace agate makes for an excellent addition to any collection of blue gems. It’s beautiful and rare, which makes it all the more valuable.

It looks lovely when set in jewellery and adds a gorgeous flair to almost any spring or summer outfit, given its beautiful blue hues. However, the stone yields plenty of its own power that is beneficial to its bearer on a number of levels. It’s not just pretty to look at, it holds power too!

If you love agate stones, have a look at these other unique agate gemstones: