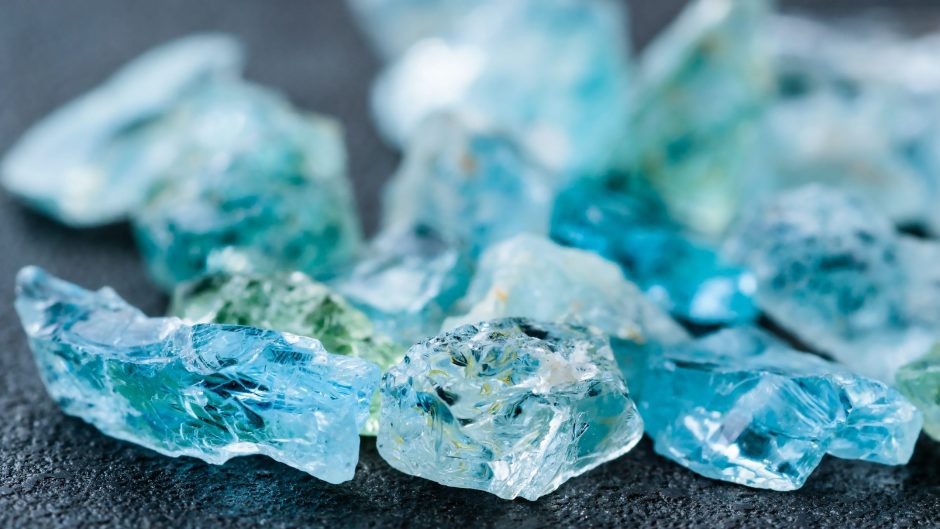 The colour blue has long been associated with wisdom, virtue, good fortune and holiness.
For several centuries already, people have adorned themselves in glittering blue stones, and the trend continues to this day.

When it comes to jewellery, blue gemstones are always in demand. However, in more recent years, the value and quality of blue gemstones have increased drastically, as more rare specimens continue to be discovered in various parts of the world.

If you love all things blue and want to learn more about the different types of gems that feature this stunning hue, keep reading.

We’ve compiled a find a list of blue gemstones, along with information on what they mean and the ideal time to gift (or be gifted) them. 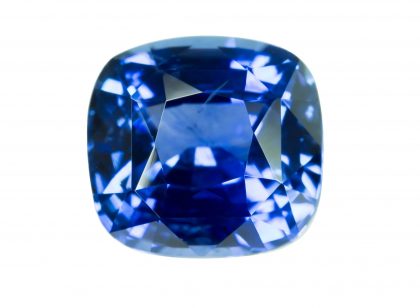 As one of the most popular blue stones, sapphires have become a great choice for sentimental pieces. The stone’s current popularity has a lot to do with Princess Diana’s engagement ring, that was given to Kate by Prince William when he proposed.

Sapphires’ lustrous colours are a result of trace amounts of titanium and iron in the gemstone’s structure. Often, the stones are subjected to heat treatments in laboratories, which helps to improve their clarity and colour.

Blue sapphire is a wisdom stone, brining mental focus, concentration and enhancing creativity. The blue gemstone is said to stimulate the third eye and throat chakra, allowing you to gain greater insight and share your wisdom with others. In the Middle Ages, blue sapphires were often worn by royalty to ward off evil. Today sapphires are still closely related to royalty, and are a favourite for engagement rings.

There’s never a bad time to present anyone with a sapphire! However, traditionally, these blue gemstones are traditionally associated with these occasions: 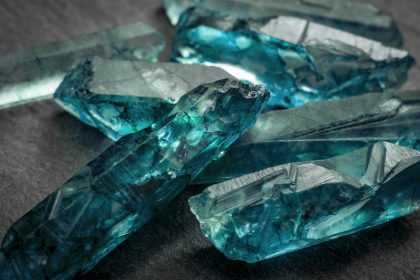 Aquamarines are known for their beautiful watery blue and green hues that remind us of the depths of the ocean. These stones never reach darker tones, as they lack the high saturation that stones like sapphires and tourmalines have. In previous years, aquamarines were commonly used as a talisman that sailors carried around to keep them safe at sea.

To achieve a purer blue colour, aquamarines often undergo heat treatment to get rid of any lingering greener hues. However, this doesn’t always work, and they often retain their unique sea-like colours.

With a close connection to water, aquamarine symbolizes tranquillity, harmony and clarity. It is said to be able to relieve stress and clear the mind, with calming, soothing properties.

Legend has it that mermaids kept aquamarine as treasure, gifting sailors the blue gemstones as protection. The sailors wore the gem as a talisman, warding off bad fortune and even seasickness.

Aquamarines make for great gifts, particularly when given as: 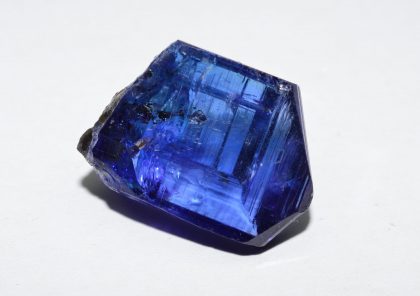 Tanzanite is only found in a very small area of Tanzania, making it a very rare and precious gemstone. In recent years, the stone’s popularity has skyrocketed due to the fact that it’s becoming increasingly valuable and hard to find. These stones have deep hues of blue and violet, which can be intensified through the use of heat treatment.

While popular, tanzanite is a very soft stone and can easily chip, break or fracture if knocked or bumped.

Tanzanite is a stone of transformation. It gets this association from being pleochroic, which means that it exhibits different colors when viewed at different angles. It is commonly believed to help dissolve bad karma and illness by detoxifying the body.

Special occasions associated with tanzanite include: 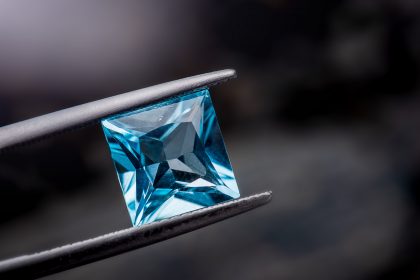 As a more affordable option in terms of blue gemstones, topaz is best known for having red and yellow hues. The stone is somewhat prone to chipping, but proper cutting angles significantly reduces the chance of damage. As with many other blue gemstones, heat treatment can produce a more authentic, rich shade of blue.

Topaz only very rarely occurs in nature, and most topaz used in jewellery has been produced in laboratories. This, in part, is what makes it more affordable than many other stones.

Topaz has long been associated with fire. In the Bible, topaz is described as a “stone of fire,” and the Egyptians called topaz the “gem of the sun.” Because of these fiery associations, topaz is a symbol of love and affection. It’s also said to stimulate and recharge the body, directing energy where it is needed most.

The beauty of topaz is special indeed. Special occasions related to topaz include: 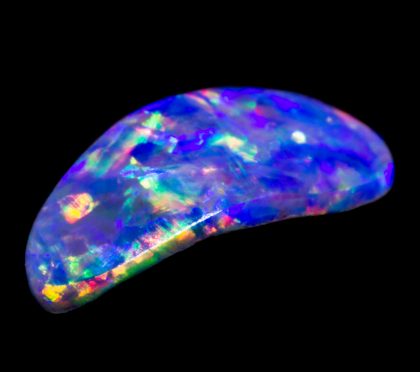 It may come as a surprise to many, but opals, which are in a class of their own, are often classified as blue stones due to the eye-catching colours that emulate from the gem. This gem has rich folklore attached to it and is often associated with fortune and good luck. On the other hand, darker opals, such as black ones, have negative connotations attached.

Blue opals are appreciated for the way that the light plays with their colours, and no two are alike. Often, it looks like sunlight on the surface of the ocean. However, opals can easily be scratched or tarnished when exposed, and many mined opals have been known to crack or dry out. Because of this, modern jewellers opt to cover the stone with a hardtop stone as a triplet to protect it from any damage. With proper care, opals can last for several years.

Opal carries the meanings of intuitiveness, clarity and luck. In the Middle Ages, opals were believed to have positive properties, while the Romans saw opals as a symbol of hope. Because of the good fortune they bring, they’re often worn as good luck charms before exams or tournaments.

Opals are diverse stones, as are the special occasions associated with them: 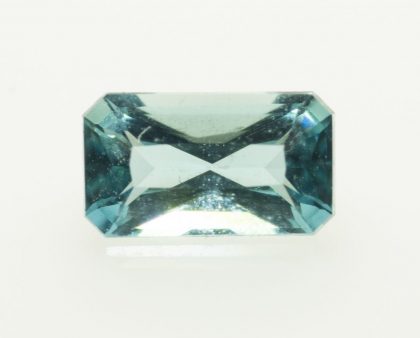 One of the world’s rarest gemstones, grandidierite may be one you haven’t heard of yet! Not many people are familiar with this stone, even amongst gemstone enthusiasts. Any discovery of a grandidierite above two carats is incredibly rare.

This precious stone is a gorgeous mix of blue and green. It’s resistant to scratches, making it ideal for use in jewellery, if it can be found. However, it’s not indestructible, so if it’s accidentally dropped or knocked, it may chip. Due to how rare this stone is, it is incredibly valuable and usually priced accordingly. Should it suffer any kind of damage, it will prove to be incredibly difficult to replace.

Grandidierite is said to have the ability to wash away negative energy. It can purify body energy and get rid of negative feelings such as fear, anxiety and sadness. This blue gemstone takes the power away from negative thoughts and turns the focus towards compassion, kindness and generosity.

Perhaps due to the rarity of the stone, grandidierite is not used as a birthstone or anniversary gift. However, it is beautiful and rare, so gifting this stone in jewellery for any reason will turn any occasion into a special one! 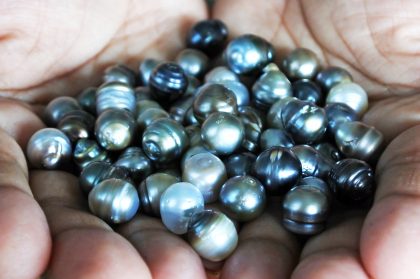 Blue Akoya pearls have come a long way and have worked their way up in the ranks of valuable gemstones. When most of us think of pearls, we usually associate them with white, beige or ivory tones.

Today, jewellers and their customers are searching for something natural yet unique, which is exactly what one gets with a Blue Akoya pearl.

These pearls are very soft and fragile and as a result, can be easily damaged. They require special care but are well worth the effort.

Blue pearls carry the meaning of trust, truth, courage, and tranquility. Because of their rarity, these blue gemstones represent flawless beauty and purity. Worn as an amulet, blue pearls can help overcome negative feelings and find a sense of deep calm.

Unlike most gemstones, pearls have a bit of a bad reputation when it comes to special occasions. Old legends say that if a bride wears pearls gifted to her on her wedding day, the marriage will bring great sadness and heartbreak. However, if the recipient of the pearl offers up a penny to the person gifting them, it should offset any bad luck coming their way. 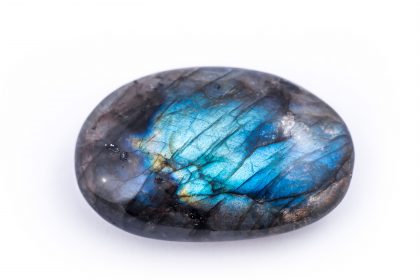 Labradorite is a precious gemstone in that many believe that the blue sheen has excellent properties. Known as labradorescence, the stone’s blue sheen is a result of twinned mineral planes working together to create this remarkable colour. When the phenomenon occurs over the whole stone, it can yield spectacular results.

While labradorite is a beautiful precious stone, it’s relatively easy to find. As a result, it’s low in cost and is often incorporated into rings, necklaces and bracelets.

Labradorite’s special properties include creating shields for one’s aura to protect against any of the world’s negativity. It’s thought to temper any internal negativity and boost one’s self confidence.

Interestingly, labradorite can change colours, so the stone is associated with transformation, as well as enhancing one’s sense of inner strength and willpower.

Labradorite is also thought to radiate a blue crystal energy, which stimulates the Throat Chakra, most commonly associated with the body’s voice. In essence, it’s believed to serve as a pressure valve that allows the energies of other chakras to be expressed.

While not a specific birthstone or tied to an anniversary, labradorite is often gifted on special occasions simply due to its gorgeous colour and ready availability. 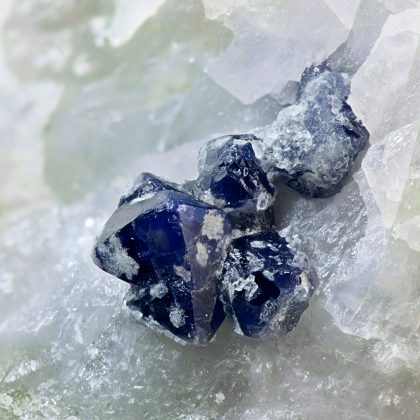 Spinel has long been overlooked as a gemstone amongst jewellery enthusiasts but has always remained a firm favourite amongst gemologists. As modern times progress, spinel is slowly gaining traction and is more frequently being used in jewellery of every kind.

When spinel is mined, the stone is often too dark to have its colour properly assessed due to its intense saturation. Once cut and cleaned its true beauty shines through. A spinel can be found in almost every colour. However, the cobalt-coloured stones are becoming increasingly popular due to their brightness.

Spinels are particularly inexpensive but considerably durable, making for a great addition to any form of jewellery. They are frequently used as imitations or simulants of a variety of other blue gemstones.

Blue spinel is associated with purifiying energy and detoxifying properties. It is said to have the ability to strengthen mental power by cleansing your mind and making you resistant to negative thoughts.

The spinel has recently been declared a modern option for the August birthstone.

Blue gemstones will forever hold a certain power over jewellery collectors and gemologists the world over. The rich history that many blue stones carry, and their strong associations with power, royalty, loyalty and wisdom all make them hugely sought after.

Precious blue gemstones tend to stand out in a way that many other stones don’t, making them the perfect addition to any item of jewellery. Whether you have jewellery sparkling with opals or tanzanite, topaz or labradorite it’s sure to be admired and adored.