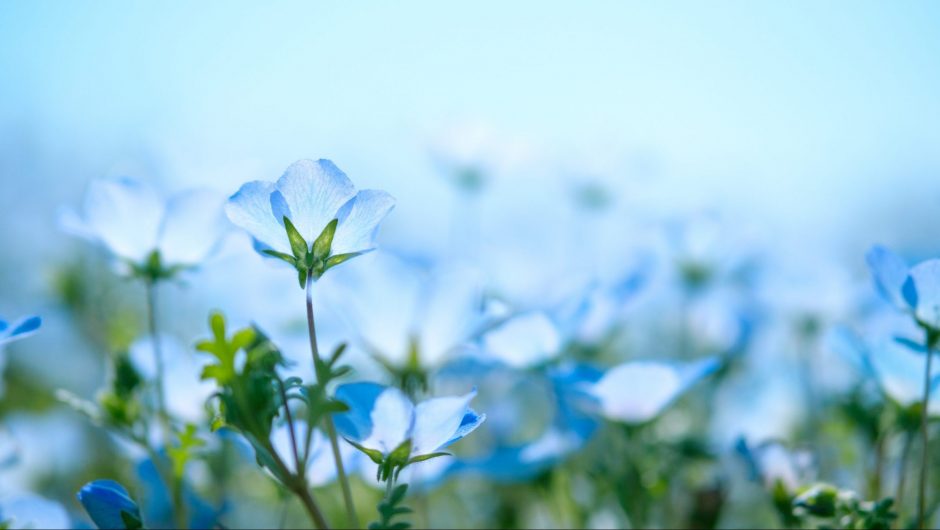 While blue is a common colour in the natural world, it’s not as common as other colours when it comes to flowers! Shades of red, pink and white are more commonly found amongst flowers, and these colours have become synonymous with meanings of love and devotion.

Blue flowers are associated with a sense of calmness and preoccupation. The colour represents peace, openness and serenity, and a floral arrangement incorporating blue flowers is thought to offer a relaxing antidote to feelings of anxiousness.

There are at least 20 different kinds of blue flowers, each of which is symbolic of a sense of harmony and goodwill and would make the perfect gift for almost any occasion. Let’s take a closer look at some of the most popular blooms in this hue. 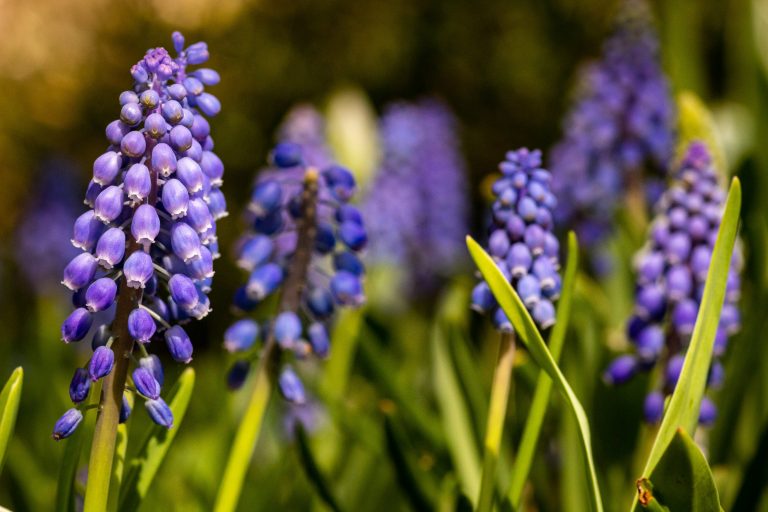 Also known as Muscari, grape hyacinths look a lot like miniature hyacinths. These plants are much smaller than the traditional hyacinth and only grow to between 16 and 20 centimetres high. The flowers look like little beads strung together up and down its stem.

Grape hyacinths are easy to grow and are low maintenance. They thrive particularly in informal landscapes and are available in several different cultivars in varying shades of vibrant blue.

Morning glories bloom from the early summer months, right until the first frost of autumn. They have slender stems and heart-shaped leaves, and the flowers are trumpet-shaped. They are very colourful and as a result, attract plenty of butterflies and hummingbirds.

These plants are also drought-tolerant and grow fairly easily. They self-seed and grow in vines. Morning glories do a great job of decorating pergolas or arches, as well as serving as a dense groundcover. Also with asters, morning glories are the September birth flower.

Love In A Mist

Also known as Nigella, this plant has earned the common name of “Love in a Mist” from the tangle of ferny foliage that forms a mist around its fluffy flowers.

While these flowers are best known for their vivid blue blossoms, they are available in varying shades of purple, pink and white too. They can bloom for several weeks and resow themselves.

Lily Of The Nile 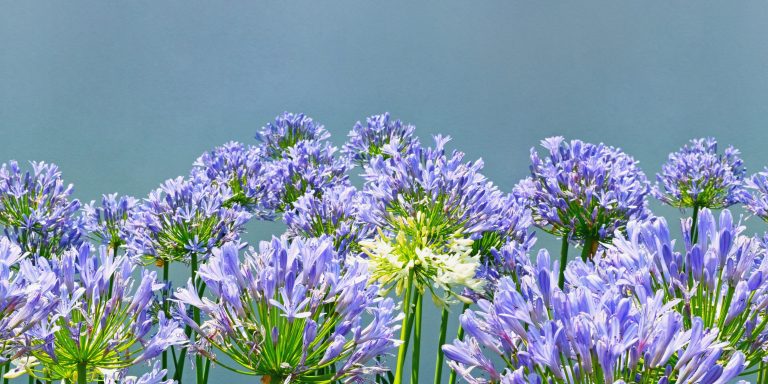 Also known as the Agapanthus or African Lily, the Lily of the Nile can grow to heights of up to two metres. These plants are native to South Africa and are easy to grow. They have no problems with pests or diseases.

Lily of the Nile flowers grow in brightly coloured, rounded clusters and are an evergreen plant. They join the lily family as a flower rich in symbolism and are a popular choice with florists for wedding décor.

Lobelia plants are one of the only varieties of flowers in the world that are true blue. They do particularly well in cooler weather and are generally in their full splendour during the Spring and Autumn months.

Lobelias are best grown in containers. Their signature hue is cobalt blue, but these flowers are also available in shades of scarlet, lilac, rosy pink and a whole host of other vibrant, tropical colours.

These plants are well known for creeping and have a tendency to overtake an area. However, with proper care and attention, periwinkles can serve your garden very well.

Originating in Europe, Veronica is a tough plant with beautiful blue flowers that requires very little maintenance. It’s tolerant of a variety of different soils and watering needs. These plants can grow up to several feet tall and there are over 500 known species of Veronica. 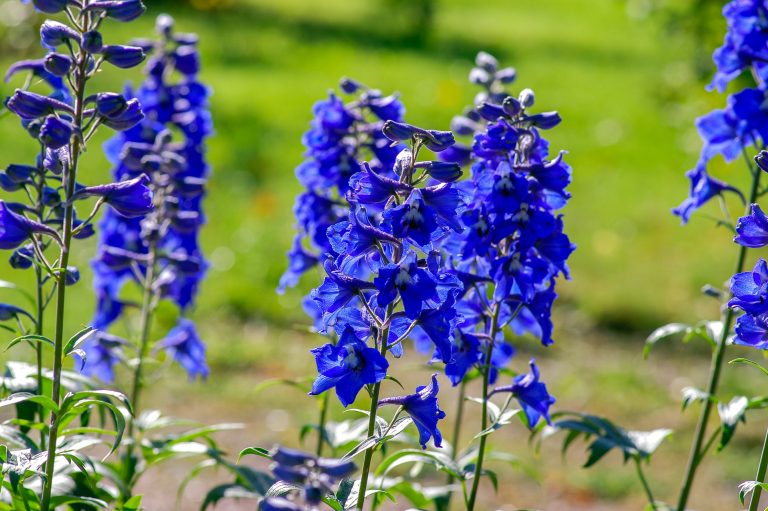 Blue delphiniums are also known as the “Queen of the Border” in landscaping. The flowers on this plant form in a basal rosette of leaves and the plant itself grows in tall spikes. The flowers are available in all shades of blue, from light to very deep.

These make for excellent cut flowers and are also available in dwarf forms, which are known to be sturdier. When growing blue delphiniums, consider planting them in containers or garden beds for best results.

Cornflowers grow in a shade that is best described as electric blue. Young cornflower seedlings can tolerate freezing temperatures, so seeds are best planted in the earlier months of Spring, or even in the milder winters of Autumn.

The cornflower is native to Europe but has become naturalised in many other parts of the world, including North America and parts of Australia.

Hydrangeas offer a sense of old-fashioned charm to almost any garden. Their immense flower heads grow in varying shades of blue, pink, white and purple. These flowering shrubs are low maintenance and with proper care, can bloom for a long time.

These plants are very easy to cultivate as they can tolerate almost any soil and thrive in it. Their blooms are abundant and offer a refreshing pop of colour to any garden. Also known as Christmas Roses, hydrangeas are at their best during the festive season.

Also known simply as the Blue Poppy, Himalayan blue poppies look exactly how they sound – just like poppies, but in varying shades of blue! They can be a bit tricky to grow but are incredibly striking in their electric blue hues.

Himalayan blue poppies grow anywhere between three to five feet tall and just like other poppies, have very hairy stems and leaves. 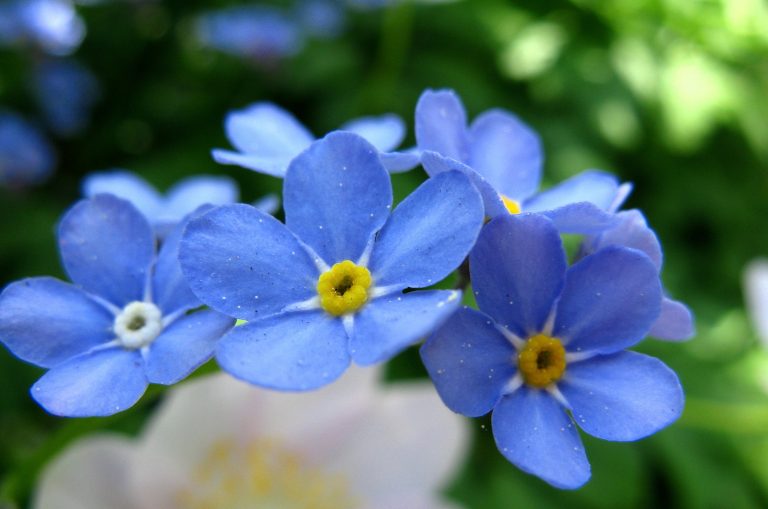 Forget-Me-Nots are another one of the very few true blue flowers out there. They grow on tall, hairy stems that can reach up to two feet in height. The flowers have five petals and boast yellow centres that look as though they are exploding from their stems.

These flowers often grow near bodies of water, such as brooks and streams. They do best when the moisture and humidity in their surroundings is high.

Globe thistle plants produce contemporary-looking flowers. They are spherical blue blooms that are drought tolerant and serve as an important source of nectar for bees and butterflies. These plants also repel rabbits and deer.

The foliage attached to globe thistle is spiny and spiky. During the Autumn months when their blooming time is over, these plants continue to provide textural interest as their seed heads are also quite beautiful.

This species of plants has been given the common name “Blue Star” due to its star-shaped flowers in hues of soft blue. The flowers that grow on amsomnia plants are small but bloom in fluffy clusters that generally last for several weeks.

Amsomnia plants are native to North America and grow with very little hassle. They are versatile for landscaping and garden design, as their foliage provides a great foil for almost every other plant.

Harvestbells are a perennial plant that can grow between eight and 20 inches tall. They boast long, light green, slender stems and leaves.

This plant’s flowers are bottle-shaped. They open only partially and occur in terminal or axillary beautiful blue clusters. 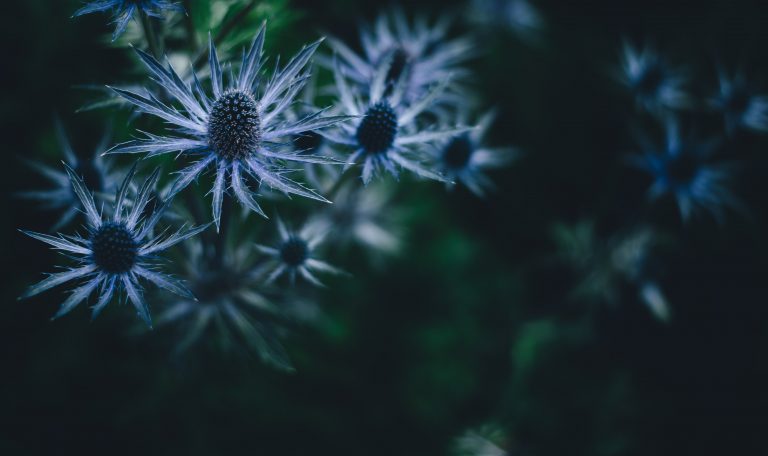 Sea holly plants are low maintenance and grow striking flowers that resemble thistles in shades of purple and blue. Despite their name, sea holly flowers are not actually related at all to true hollies. The plants boast long, thin leaves that could even appear rounded, depending on their variety. They are tolerant of dry conditions and handle salt spray with ease.

The flax flower is a wild bloom native to California. However, it has shown a success rate of up to 70% when grown in other parts of the United States.

These flowers are cup-shaped and reach a height of up to one metre at maturity. Flax plants produce beautiful, small blue flowers and are generally grown for their oil, which is an important source of protein for livestock.

The Empire Blue Butterfly Bush is as close to a true blue than any other. This shrub grows very easily and features blue panicles and contrasting orange eyes.

True to its name, this mildly scented plant is irresistible to butterflies and hummingbirds, but deer and other wildlife tend to stay away from it. These plants work particularly well on patios and pathways as they bloom upright and continuously.

Poor man’s weatherglass is an easy to grow flowering plant. As a member of the primrose family, this plant is native to Europe, Western and Northern Africa.

The plant gets its name from an interesting characteristic. It is able to predict the weather! On sunny days, its blue blooms open. On cloudy days when rain is approaching, they close up. 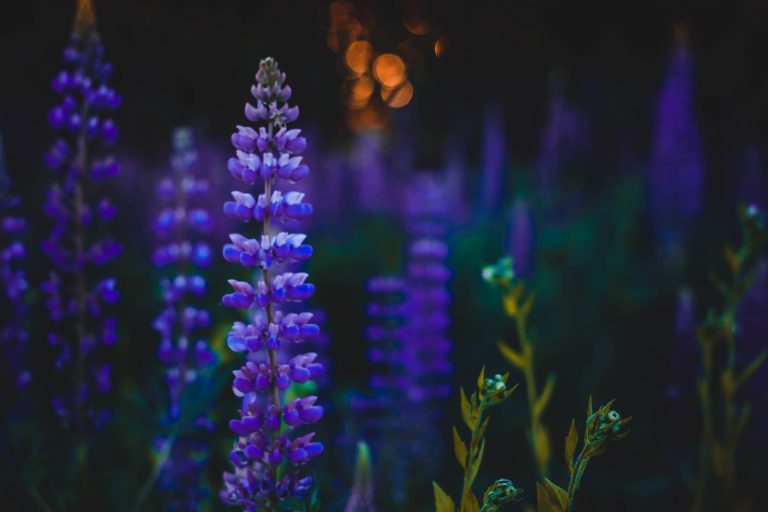 Lupines are one of the world’s most celebrated wildflowers. When they come into bloom during springtime, festivals are held for them all over the United States, from Maine to California. The types of lupine grown in gardens are generally hybrids bred to maximise the vibrant blue of the flower.

If you’re feeling blue, these flowers should make you feel better! There is an abundance of blooms to choose from, and they will brighten up anyone’s day.