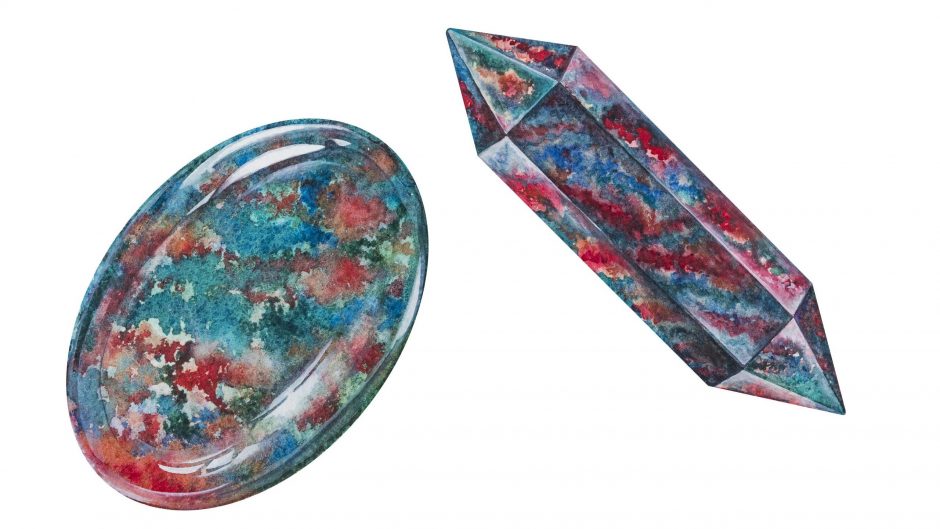 Bloodstone, also knowns as heliotrope, is a fascinating stone with lots of meaning. This dark green gem with bright red splatters has been sought out for thousands of years for its unique appearance and perceived healing properties. This ancient stone has even been documented in history as having powerful metaphysical abilities.

Fascinated? Find out more about bloodstone’s meaning, what it’s used for and other interesting historical facts about this stone. 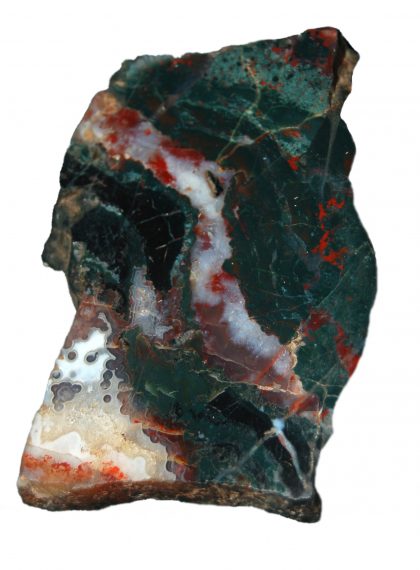 Bloodstone is a beautiful green stone that features red or brown spots that form as a result of impurities in the iron oxide. These spots look like blood splatters, giving the stone its English name. The stone is also referred to as a heliotrope, and gets this name from the Greek words helio, meaning ‘sun’, and tropos, meaning ‘toward the sun’. It’s said that the colour is also reminiscent of heliotrope plants that face towards the sun.

The solid green colour that encompasses the rest of the stone is brought in as a result of the amphibole or Chlorite minerals found in the green Chalcedony. Chalcedony is a cryptocrystalline form of silica that’s composed of fine intergrowths of moganite and quartz, the minerals that make up most agate stones too.

Because of its varied composition, the green in bloodstone is not always evenly distributed and may have blue or yellow streaks in addition to green.

Where Do You Find Bloodstone?

This gemstone is most commonly found in India. However, most of the gems currently on the market were sourced in Australia, Central Europe, Russia, the Czech Republic, the Isle of Rum on Scotland’s West Coast, the USA, Madagascar, and Brazil. The fact that the stone is readily available and easy to source makes it far more affordable. As the supply is so plentiful, there is no real risk of stocks being depleted.

How Much Is A Bloodstone Worth?

The stone is easy to source which makes it more affordable. Like all precious gems and stones, the factors that will determine the value include:

It goes without saying that the bigger the stone, the bigger the price tag. However, the quality of a stone is also important. A large, imperfect stone may not be priced as high as a smaller, more perfect gem. Other pricing considerations include the design of the stone as well as any potential significance related to the design.

Is Bloodstone A Jasper?

While the bloodstone is often referred to as a form of jasper stone, it’s not actually the same. While both stones have a radial, grainy structure, their colouring and the red spots on the bloodstone differentiate them from each other.

Bloodstone is a rather hard stone and is rated between 6.5 and 7 on the Mohs scale. This makes it a great stone for jewellery as it won’t chip or break easily.

The stone’s unique colour is brought on by Hematite, a form of iron oxide that is responsible for turning rust red. No two bloodstones are the same and each has its very own, one-of-a-kind patterns. Other mineral deposits in the stone will affect the colour and can result in some unique colour combinations.

In history, the bloodstone was deemed the most beautiful of all jaspers (even though it’s not technically a jasper at all!). It was first labelled the Sun Stone, followed by Christ’s Stone. The stone refers to birth and life, and is said to carry the purity of blood. It’s believed to be nurturing and have protective properties.

A famous legend of this gemstone claims that it formed when Jesus Christ was crucified. Legend says that his blood fell to the earth and turned to stone, while another suggests that blood fell to a jasper stone as Jesus was stabbed by a spear.

Following a similar theme, the bloodstone has become a symbol of sacrifice and courage. It’s said to bring out the most altruistic characteristics of the person that wears it.

What Is A Bloodstone Good For? 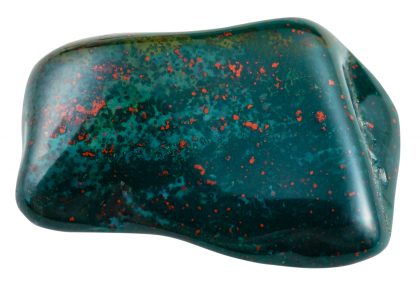 The bloodstone gem is believed to have protective properties that ward all kinds of threats – from verbal to physical and everything in between. It’s considered to provide guidance and courage to those who need it most. Some people recommend wearing it or even sewing it into your jacket to give you strength in difficult, unfamiliar situations.

When it comes to familial bonding and potential misunderstandings, bloodstone may help ease these difficulties and cultivate a nurturing environment.

If you’re lacking motivation or clarity when making decisions, or simply need a mental boost, this stone is said to help to revitalize you and boost energy levels.

For increased immunity and protection from illness, bloodstone has been used to stimulate the immune system and fight off infections, inflammation, and colds and flu. It’s also claimed to heighten your intuition, stimulates dreaming, and increases creativity.

From a mystical and magical perspective, the stone is believed to harness the power of the weather. It is believed to bring about the winds of change or rains to wash away your sorrow.

Bloodstone as a Birthstone

Can You Sleep With Bloodstone?

Placing the bloodstone around or near you when you sleep is said to revitalize you and stimulate powerful dreams. It’s used to get rid of negativity and evil forces – offering you protection while you’re at your most vulnerable.

Where To Buy Bloodstone Stone Online?

There are plenty of places to buy Bloodstone online. From specialty online shops to online giants like Amazon.

All In The Power Of The Stone

While the beauty of bloodstone is a key selling point, there’s something mystifying about the folklore that’s associated with it too. If you’re looking for protection, clear thoughts, improved immunity and to purify your blood flow, bloodstone could be the gemstone for you. It’s readily available at a reasonable price point, and diverse enough to incorporate into your surroundings.

Pretty and powerful, with a long and interesting history, bloodstone is a gem that many hold dear, for good reason.

For another special looking gem, find out about Moss Agate which has a beautiful marbled green effect.