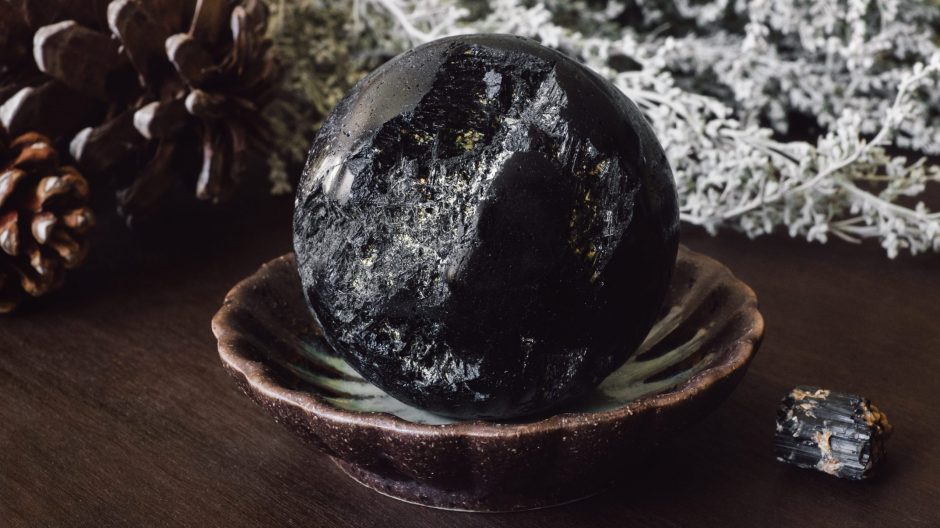 Black gemstones can be hard to find, which is why many of us look twice when we see them set in beautiful pieces of jewellery. They’re alluring, intriguing and mysterious, and black tourmaline is a great example of why they are so adored.

Black tourmaline has numerous properties and associations that make it a special gemstone. It’s generally pitch-black, making it all the more striking.

What Is Black Tourmaline?

Black tourmaline comprise of a very complex and varied chemical formula. The stones’ makeup is characterised by the presence of boron, a naturally occurring element.

Interestingly, earth’s major source of boron is magma, or molten rock. Black tourmaline crystals comprise of boron, as well as aluminium, a number of hydrate molecules and silicon. It’s also common for tourmaline to contain sodium or calcium (but not both), as well as lithium, magnesium or iron.

Knowing the volcanic formation of pegmatite is key to understanding how these stones are created.

Pegmatite is characterised by its coarse grain, which often contains very large crystals. It’s created when magma cools down. However, unlike other rocks formed from molten rock, pegmatite is developed from the aqueous solutions within the magma. These streaks of hot liquid are rich in elements like iron and silicone. Pegmatite rock forms as the mix of liquids cools down and forms crystals. This rock contains a mix of different minerals, including tourmaline. 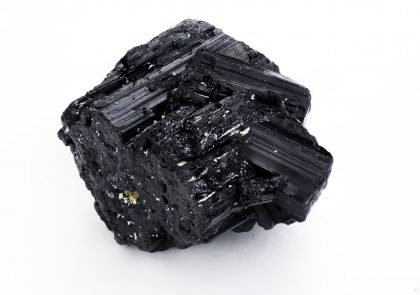 Black crystals like tourmaline harbour significant meaning due to the darkness and depth of their colour.

For many, black tourmaline represent purification and the cleansing of the emotional body. In other words, the stone can rid the mind of any negative energies and thoughts like anxiety, anger and feelings of worthlessness.

Black tourmaline’s meaning is quite significant. These gemstones are also seen as a symbol of strength. Some crystal healers believe that black tourmaline crystals can help give its bearer the inner strength they need to overcome substance abuse. It helps to rid them of thoughts and behaviours that may potentially be harmful, such as obsessive compulsions and excessive worry.

What Is Black Tourmaline Good For? 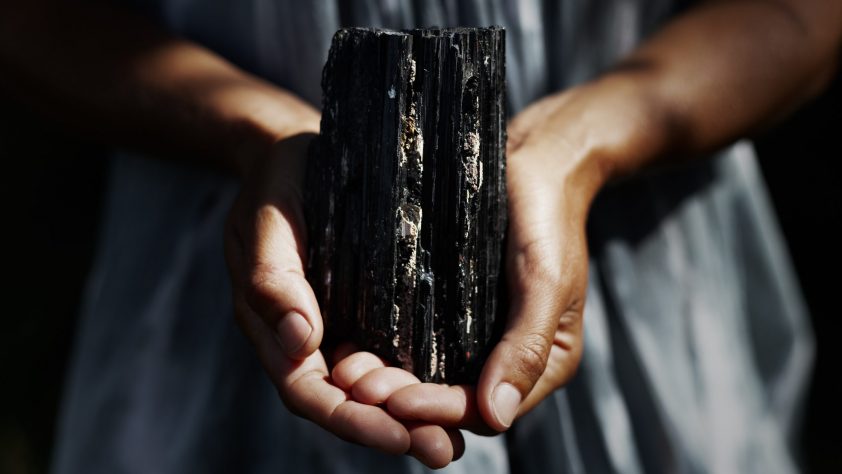 As is the case with many gemstones, black tourmaline crystals are believed to be good for a number of reasons.

Watermelon Tourmaline: What Does this Fruit Gemstone Look Like?

The stone is said to help increase physical vitality, increasing one’s energy levels and helping them function on a higher level.

It’s believed that black tourmaline is a good replacement for stress and tension. Instead, it helps its bearer view the world more objectively, allowing for clearer, more rational thoughts.

Crystal healers see the black gemstone as one that can inspire a positive attitude, regardless of the circumstance, as well as stimulate a sense of altruism. Black tourmaline is also thought to aid in practical creativity for those who are generally feeling a bit of a mental and creative slump.

Black tourmaline can be a powerful stone both physically and emotionally. The physical benefits include improved circulation, and reducing muscle aches and pains.

When it comes to anxiety and lack of confidence, the black tourmaline can also help release negative energies within you. If you are looking to gain greater self-confidence or self-esteem, this stone should be able to aid you in that. By transforming negative energies into positive ones, you will be less anxious and more calm instead; less stressed and more relaxed instead.

Black tourmaline also goes by the name of schorl tourmaline. The term tourmaline is said to be derived from the Sri Lankan term turmali. However, turmali was previously a word used to refer to another gemstone, yellow zircon.

According to modern legend, a mix-up in a mislabelled consignment resulted in these crystals being renamed.

The physical properties of a black tourmaline stone include plenty of vertical striations, ridges and furrows. Other than a dark black hue, some varieties of tourmaline include pink, green, blue and red.

The stone is pyroelectric and has the ability to produce electricity once it’s heated. Furthermore, black tourmaline is also referred to as a piezoelectric stone, which means that it’s able to store electrical charge. Many believe that the stone’s pyroelectric and piezoelectric properties make it extremely powerful and that it can add plenty of benefits to one’s health and well-being.

How to Use Black Tourmaline

Black tourmaline can be used in various forms, more primarily as a jewelry that you can wear on a day-to-day basis. By wearing black tourmaline on you, you may be able to feel more confident in yourself. It can help to limit negative energy from manifesting but rather good healthy ones.

If black is not your color, there are other kinds of tourmalines too such as green tourmaline, watermelon tourmaline and pink tourmaline which can add a bit more color to your life.

Black tourmaline can also be used in your sleep. By placing black tourmaline stone under your pillow, it may help provide better sleep and eliminate negative energy by soothing whatever body pains you may have.

How To Cleanse Black Tourmaline

Black tourmaline is quite a hard and resilient gemstone, but this doesn’t mean that the black crystal should not be cleansed as often as possible.

While it’s often used in practice to soothe one’s mind, body and soul, each use may expose the stone to energies that could perhaps be misaligned. For those who believe that crystals act on an energetic level and send natural vibrations into their surroundings, cleaning black tourmaline is key, as it helps the crystal recharge and restores it to its natural state.

The best way to cleanseing black tourmaline is to keep it under running water for about a minute or two before laying it flat to dry. Prolonged exposure to water, or contact with minerals such as salt, can cause damage to the stone.

How To Activate Black Tourmaline

Activating black tourmaline is a fairly simple process, but you do need to set your intentions clearly before doing so.

Watermelon Tourmaline: What Does this Fruit Gemstone Look Like?

In order to activate or attune the stone, you need to charge it with your own energy. This is done by simply holding the stone in the palm of your hand while you close your eyes. Next, you need to visualise your goals and intentions before feeling the black crystal absorb your energy. Be careful of possessing negative energy, it may not be ideal to activation.

If you plan to use your tourmaline daily in a ring or pendant, place it somewhere where you’re consumed with your daily life. This can ignite a grounding effect and bring you a sense of tranquillity when times are tough.

How To Tell If Black Tourmaline Is Real 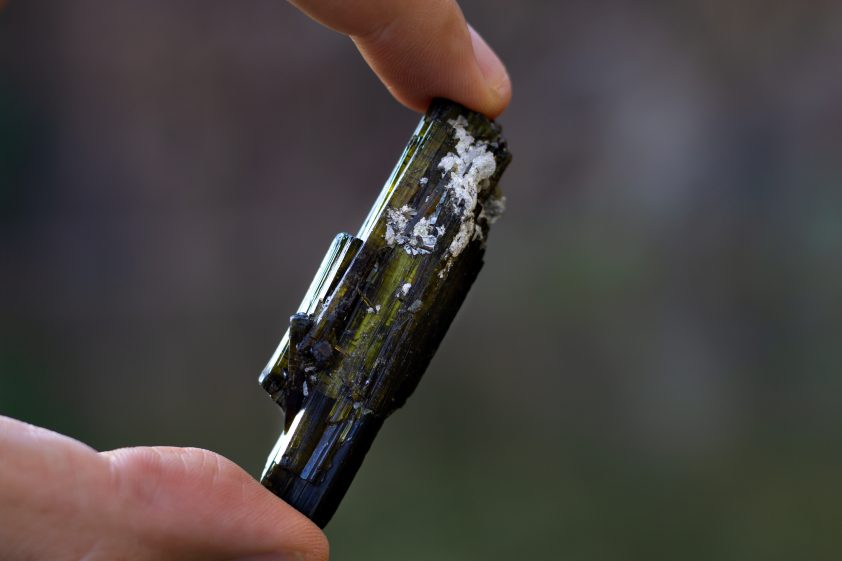 Black tourmaline is quite easy to identify. It’s hard and quite chunky and has visible lines on its body. While it is possible to confuse these crystals with other stones, there are a few sure-fire ways of identifying tourmaline:

A true beauty, black tourmaline is a gorgeous gem that always makes a statement! Bye to negative energies and hi to positive ones that provide balance and calmness!