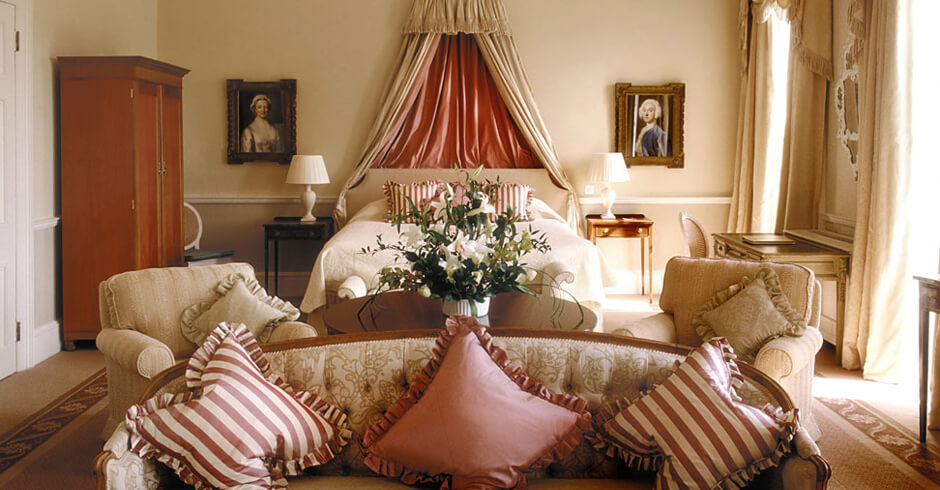 Quite possibly the cream of the crop for stays outside of London, The Royal Crescent Hotel possesses all the amenities best suited for a Queen. The sheer luxuriousness of the furnishings and décor might be the best the hotel has to offer. Or is it the immaculately kept spa and exotic techniques used therein? Or perhaps it’s the canal cruises on a 1920s mahogany and teak boat? We just can’t decide.

If you’d prefer to stay in a castle rather than a hotel, then Ellenborough may just be what you’re looking for. The 5-star hotel has as much beauty outside of its walls as much as it does within them. With telescopic views of Cheltenham racecourse on one side, and the highest part of the Cotswolds the other, Ellenborough is certainly not lacking as far as memorable views are concerned.

Originally a country house, Hotel Endsleigh sits right on the edge of Dartmoor. The Hotel overlooks a 108-acre expanse of unspoilt forests and grassland and, with a mere 16 rooms in the hotel, that’s a lot of space for a very small number of guests. Understandably, Endsleigh is the sort of place befitting those that like a walk in unexplored territories, as well as those that prefer luxury in tranquillity.

Augill is a country house-cum-castle wedged right in the middle of the Yorkshire Dales and the Lake District. Not only does one have their own pick of where to walk in some of Britain’s most luscious countryside, Augill’s rooms have even more to boast about with stained glass windows, wardrobes in turrets, four poster baths, and wide open views. Oh and, need we mention, it’s a castle.

It’s The Connaught, and it’s in Mayfair, so what more is there to say? Well, Connaught was recognised as the UK’s best hotel by Conde Nast in 2013. It is located in a relatively and somewhat quiet corner of Mayfair. Not only because of this, it’s stylish, fashionable, and in many respects is the ‘place to be’.

If there was a hotel to epitomise Mayfair’s elegance, Claridge’s would be it. The Prince Alexander Suite, one of Claridge’s signature rooms, features a personal butler, complimentary chauffeured airport transfer, and a magnificent marble-lined bathroom. Also, add to that list a Broadwood Grand Piano.

Belmond Le Manoir Aux Quat’Saisons
While Le Manoir Aux Quat’Saisons likes to first tell you that it’s the home of Raymond Blanc’s cuisine and cookery school, the hotel does have an impressive garden from which it sources it’s ingredients for its Michelin 2 star kitchen. The surroundings of the former manor house located in rural Oxfordshire are nothing short of idyllic.

While the fact the spa is located in an old cowshed might sound too much on the rustic side, Babington offers to spoil oneself with the sort of pampering similar in standard to some of the world’s best spas. In fact, the ‘Cowshed’ name has caught on so well that its spas have proliferated to London, New York, Miami, and Berlin.