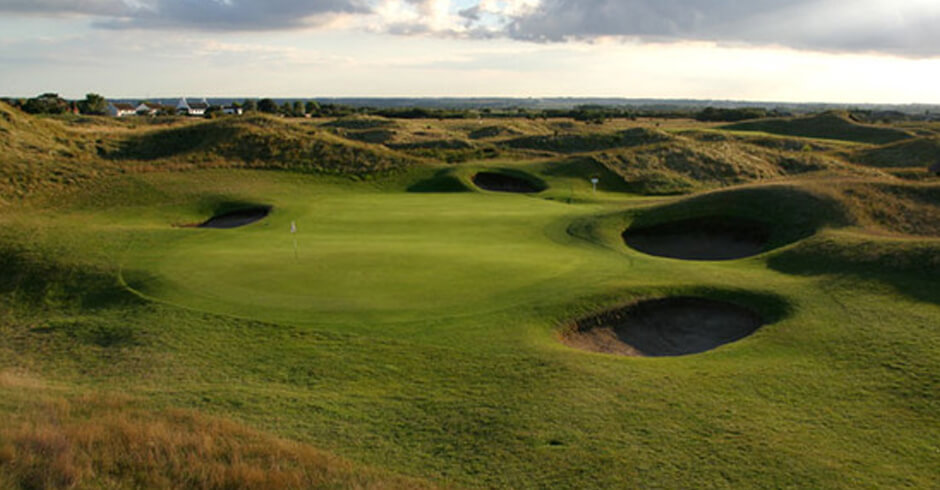 Established in 1887 by Dr. Laidlaw Purves of the Royal Wimbledon Golf Club, Royal St George’s was initially intended as a course on which London based golfers could escape the city’s unkempt and crowded greens.

Dr. Purves, though, was ambitious and dreamt of a links course that would rival St Andrews in Scotland. Royal status, bestowed by King Edward VII, acknowledged his achievements in doing so in 1902.

Characterised by humps and swales, dunes and wild rough, fast-running fairways and deep bunkers, demanding carries put a premium on strong driving. Yet, even with such uncompromising terrain, properly flighted and directed shots will always find their target and leave a clear line to the green.

The layout at the course has remained faithful to the original design, created by the club’s first professional, George Lowe, over a century ago. The only changes were made in 1919, when the preeminent course designer Harry Colt was asked to make recommendations for improvement.

Renowned as one of the world’s most challenging courses, the conditioning of the course is regarded as exceptional, making the greens firm, fast and true.

Nestled amongst the hills in the Scottish highlands, but just an hour away from both Edinburgh and Glasgow, Gleneagles resort is without question one of the most prestigious venues in the world of golf. The location of the very first ‘unofficial’ Ryder Cup style matches in the early 1920’s, the tournament returned to Gleneagles in 2014, bringing with it golf’s biggest names.

Also see  5 Reasons to Fall in Love with Cornwall

A winning blend of natural beauty and golfing adventure, the three championship golf courses at Gleneagles are regarded among the very best golf courses in the world. The inspiration of two of the greatest names in the game, five times Open winner James Braid and the Golden Bear himself Jack Nicklaus, the courses offer tantalising challenges for all levels of player.

Deemed by many to be the finest golf course in the world, and the undisputed home of golf, St. Andrews’ Old Course has hosted more Open Championships than any other layout.

The course is also most certainly the oldest in the world – the spiritual home of the sport. It was in 1553 that the Archbishop of St Andrews administered confirmation on the course, allowing locals to play on the links. Yet rumour persists that people were playing here as far back as the thirteenth century.

The greens are the highlight – they are extraordinary putting surfaces where it is dif cult to see where the fairway, fringe and green stops or starts.

The course at Ganton nestled within the lush Vale of Pickering, was first founded in 1891 and has since been tested by some of the world’s most renowned golfers. Gary Player once said that “Ganton is the only inland course worthy of holding the Open Championship”.

The fast running fairways and the firm true greens require the highest quality of shot making and control. There are few trees other than those on the boundaries; with plenty of space the original open character of the terrain has been retained. As to the bunkers, Ganton has few peers; the player who is bunkered is punished for his error so positioning is key if you want to spend your round playing out of the sand.

Nestled at the feet of the majestic Mourne Mountains and sweeping out towards the Irish Sea, Royal County Down could scarcely have a better setting.

It was a Scottish schoolteacher, named George L. Baillie, who designed this masterpiece. He laid out the first nine holes in 1889, before Old Tom Morris paid the hefty total of four guineas to purchase and extend the course to 18 holes.

The fairways are naturally undulating, while the greens are small and full of wicked borrows. The rugged sand dunes are striking: clad in purple heather and yellow gorse.

One of the best courses of them all, the outward nine is an experience never to be forgotten.