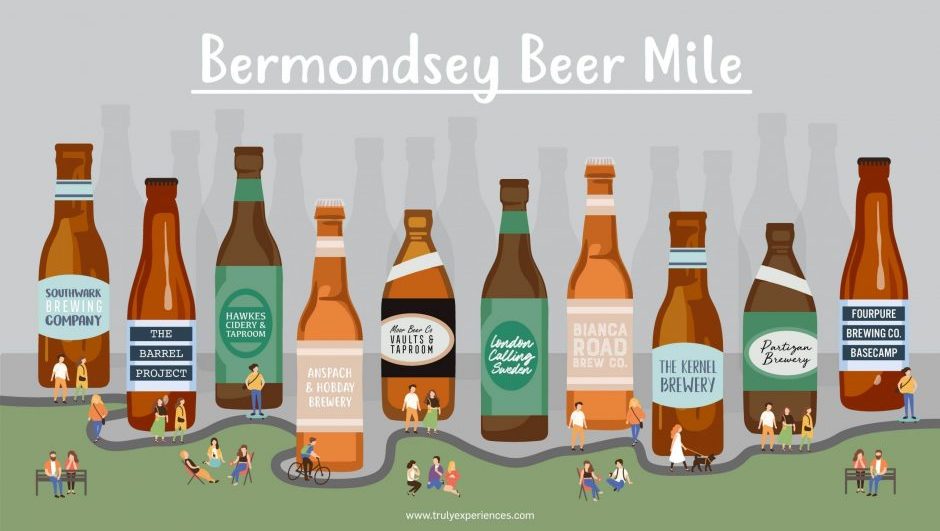 Does your heart skip a beat at the thought of hops and barley? Do your knees go weak at those three sexy letters – I.P.A? If you’re a true craft beer lover in London, then you’re in need of a visit to London’s best boozers, the Bermondsey Beer Mile (or two miles if we’re being precise).

London’s craft beer scene has exploded over the last few years, and Bermondsey is home to some of its true aficionados. We’ve broken down everything you could possibly need to know about this mile-long beer lover’s dream so you can get the most out of your trip to the Bermondsey Beer Mile.

Here’s a handy Google map of all the stops on our suggested route. Let us know how your pub crawl goes and if you have any suggested additions to the route. It’ll make us beer-y happy.

What is the Bermondsey Beer Mile?

The Bermondsey Beer Mile is London’s unofficial amalgamation of artisanal brewers and bottle shops, serving as an indulgent pub crawl for the avid ale lover.

What started as a couple of breweries dotted under the railway arches has mushroomed into a beating metropolis of pubs. It used to be that you could stage a little pub crawl with a pint at each stop without losing control of your limbs. These days there are far too many stops, so it helps to plan your route.

Where is the Bermondsey Beer Mile?

Located in South London, the Beer Mile is a stumble away from the Bermondsey tube station, but you can start at either end of the Bermondsey arches. The mile has grown organically over the last few years so isn’t so much a straight crawl but rather a tasty meander.

These days most patrons start their journey at the Maltby Street Market with some of London’s star traders. We highly recommend starting your hunt for the ultimate brew with sufficient lining of your stomach (because Mum wasn’t lying when she said drinking on an empty tum wasn’t a good idea).

When is the Bermondsey Beer Mile open? 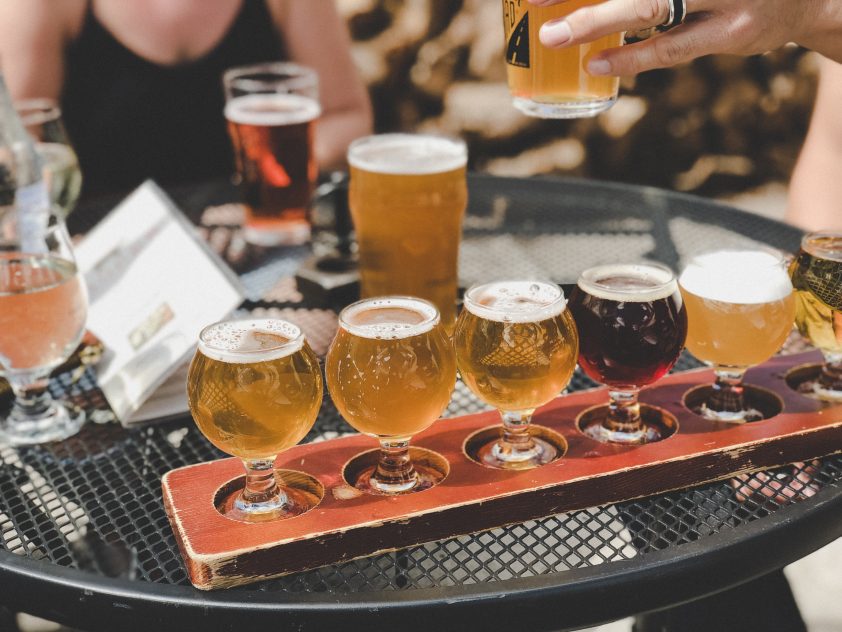 Fortunately, (or unfortunately, depending on how you look at it), the Bermondsey Beer Mile is best to be tackled on a weekend. Saturday and Sunday are when all the breweries are open to the public, from around 11 am to 5 pm. This will give you the time you need to fit in those tasty pints without having to rush.

These days, some of the bars stay open well after 5 pm, so we’ve included the weekend opening times so you can stay late if you decide to do so. And if you can make it.

To create a definitive list of bars to visit on The Mile is tricky, to say the least; there’s always a trendy new joint popping up or a recently opened taproom from an up and coming brewer. At last count, there were 16 bars and breweries along the mile. But to get the most enjoyment out of your crawl without having to rush, we think ten in the ideal number.

We’ve done our very best and can confidently say we’ve put together the ultimate beer crawl to enjoy a beer (or ten) along the Bermondsey Beer Mile.

On your marks, get set, go! 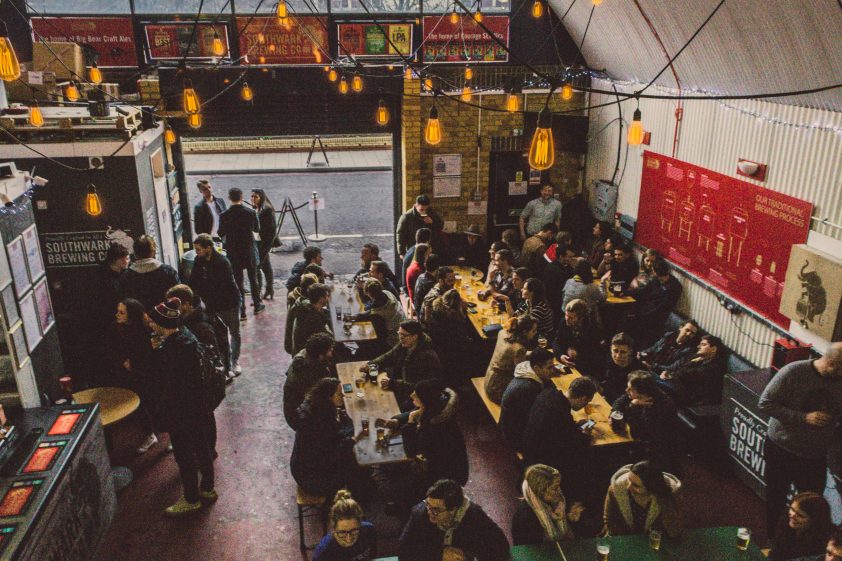 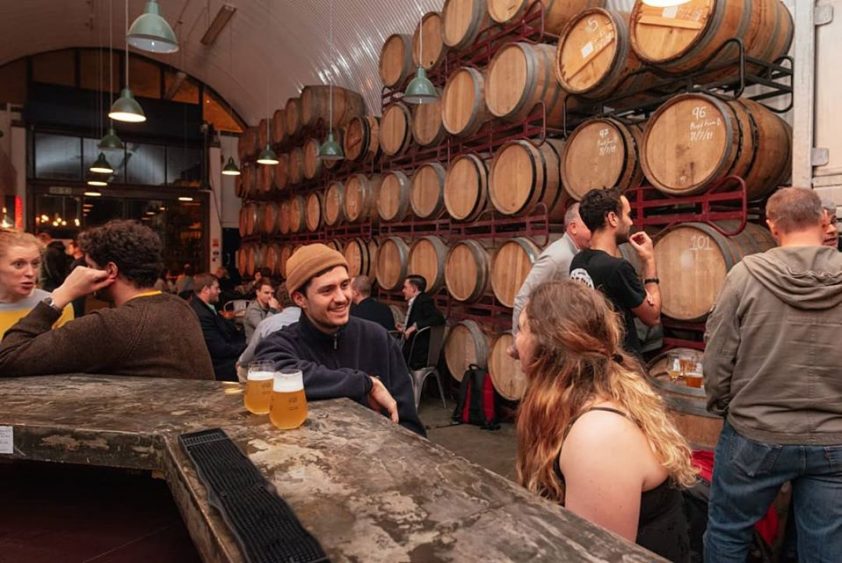 Brandishing the tagline “born in Gipsy Hill, matured in Bermondsey”, The Barrel Project is notorious for its 200 barrels of aged oak. With 24 taps you’re guaranteed to discover your favourite tipple. From stouts to pale ales and lagers, they’ve got every beer you can imagine. It’s easy to end your pub crawl here. The welcoming atmosphere is tough to resist but after a pint, or three, tear yourself away from the brimming bar to the next stop. 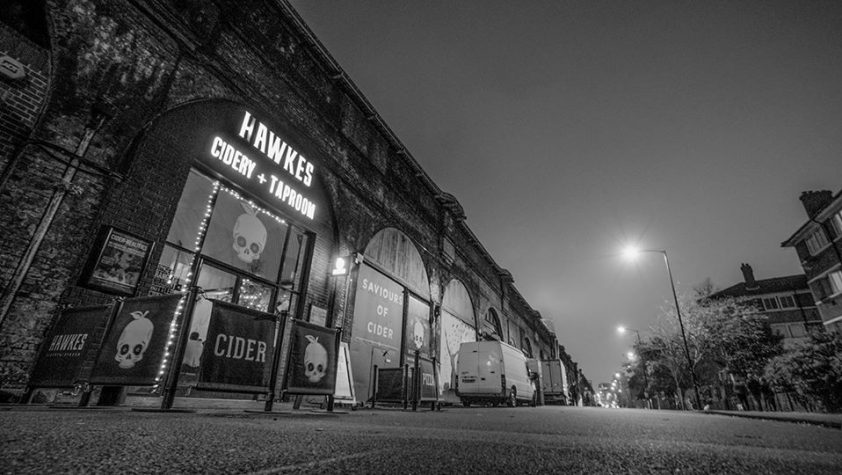 Eloquently dubbed the saviours of cider, Hawkes Cidery & Taproom aspires to bring back London’s real cider. Inspired by the original street hawkers, Hawkes’ endeavours to find the sweet spot between the present and the future. They’re bringing back the big cider tradition that London’s missing. Take fa break from your usual pint and sample one of their handpicked urban orchard brews – delicious! 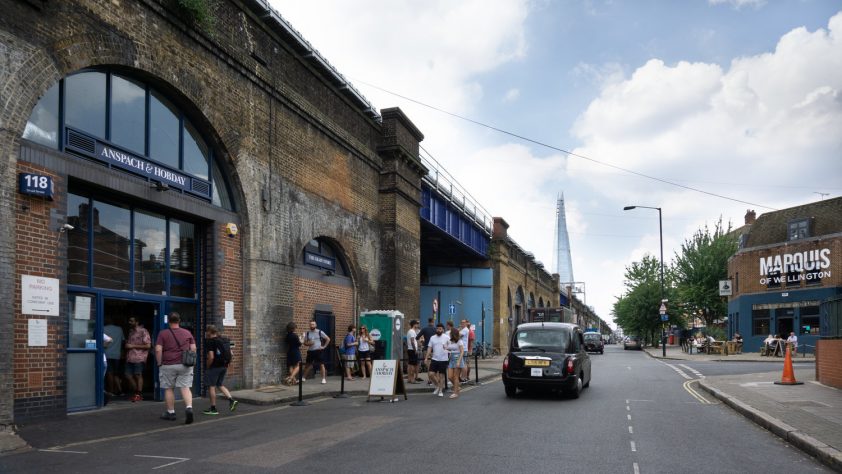 Anspach & Hobday curate a delicate mix of modern and classic with their in house brew. Leading the charge of new wave craft beer in London, they’ve developed an elevated sense of quality that’s tough to beat. From the classic porters and stouts to the experimental Weisse and Amarillo blondes, they’re anything but the usual. 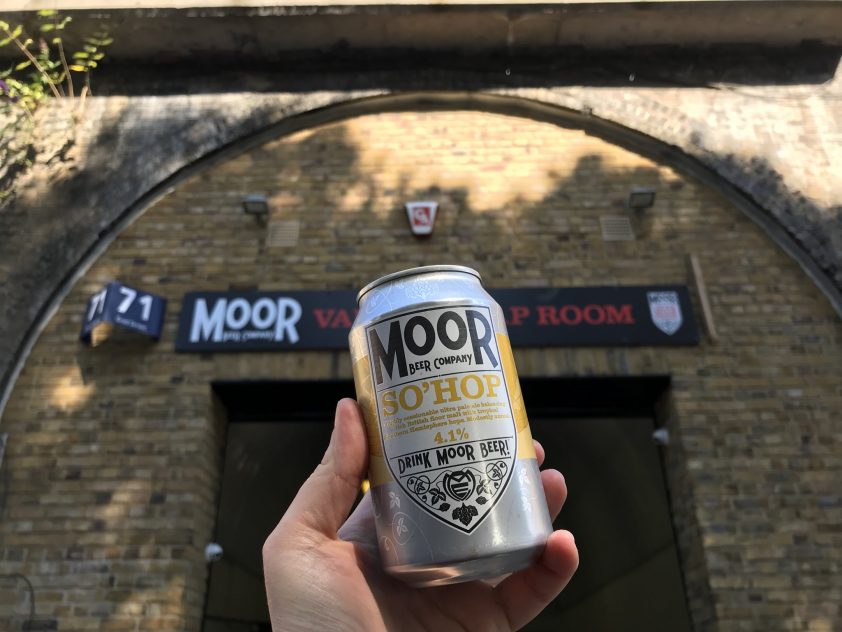 With a clear focus on flavour, drinkability and enjoyment, Moor Beer’s Californian roots are evident in every brew. Since their opening in 2007, they’ve become one of the world’s top-rated breweries with a newly refurbished taproom, store and vault. It’s a foreign affair with German philosophy, American flavour profiles and British fermentation – a Modern Real Ale is born! 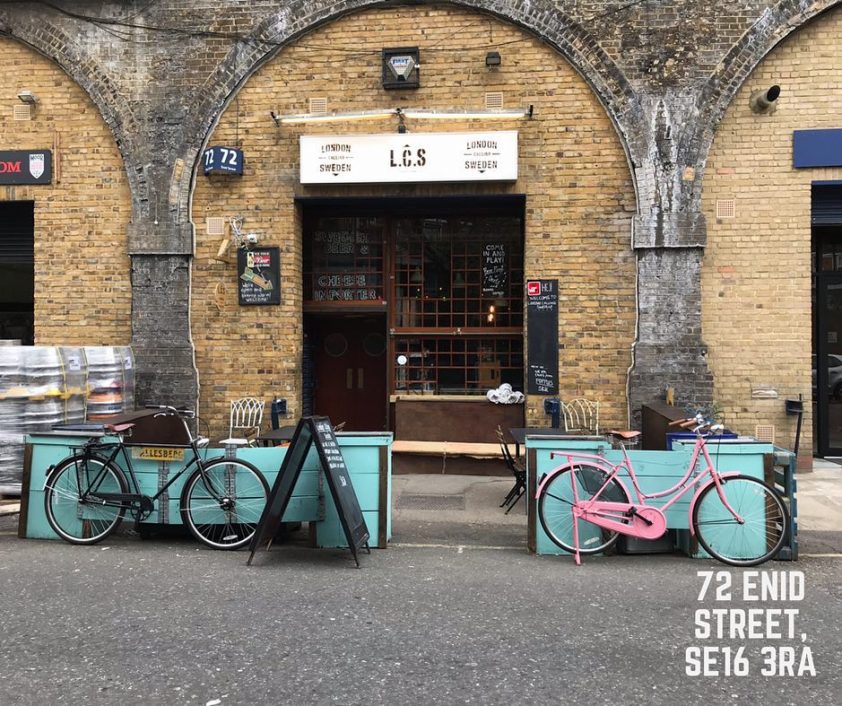 While the name conjures up memories of techno lights and garish Europop, London Calling Sweden is, in fact, a classy Swedish taproom. Serving up pints of craft beer from Poppels the pub boasts some serious European flavour. Throw in some festive live music, and it’s sure to be one of your favourite stops. 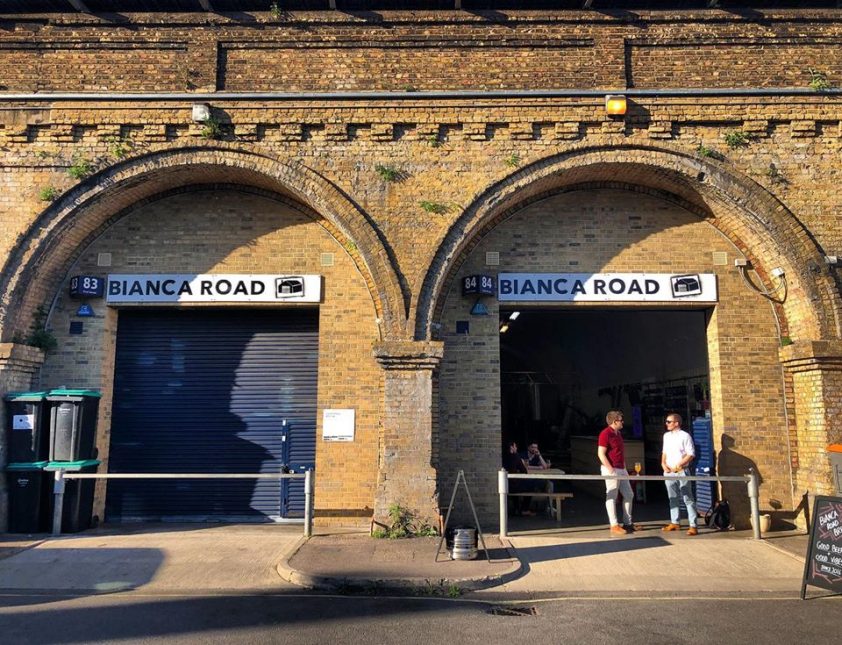 Brewing delightfully fresh and hoppy West Coast beers, Bianca Road Brew Co. was inspired by a coast to coast cycling adventure from San Francisco to Miami. Founded in early 2016, they’ve perfected the golden nectar. You can’t go wrong with the Tropicali IPA or the Crimson Red IPA. While they may be the new kids on the block, they’ve become somewhat of an institution on the Bermondsey beer mile.

Man About Town: Experience Days For Men In London 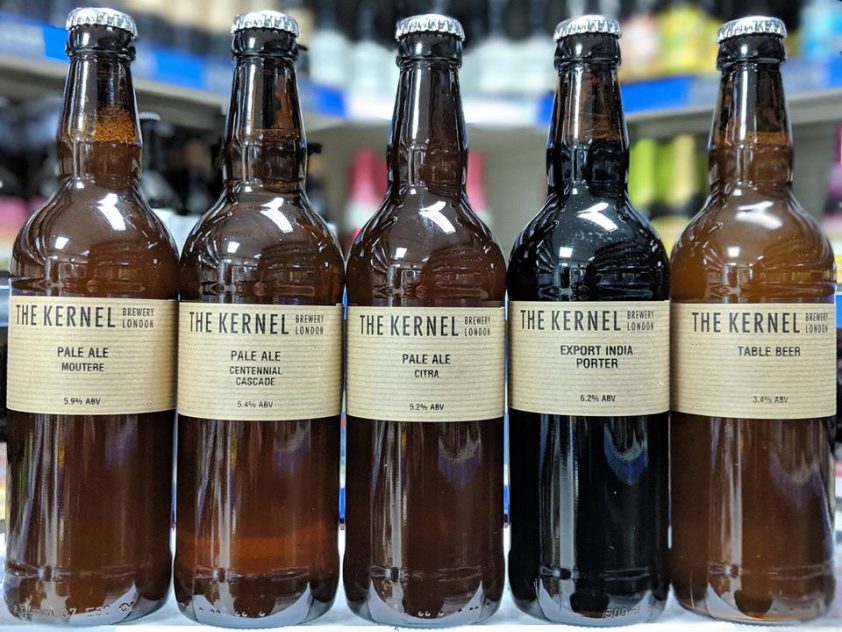 Springing from the need for more good beer, The Kernel Brewery prides itself in beer that demands your attention. Think upfront hops, lingering bitterness and the glorious taste of malt. Their emphasis on the depth of flavour comes through in every drop. From Pale Ales to old school Porters and Stouts – they don’t hold back. 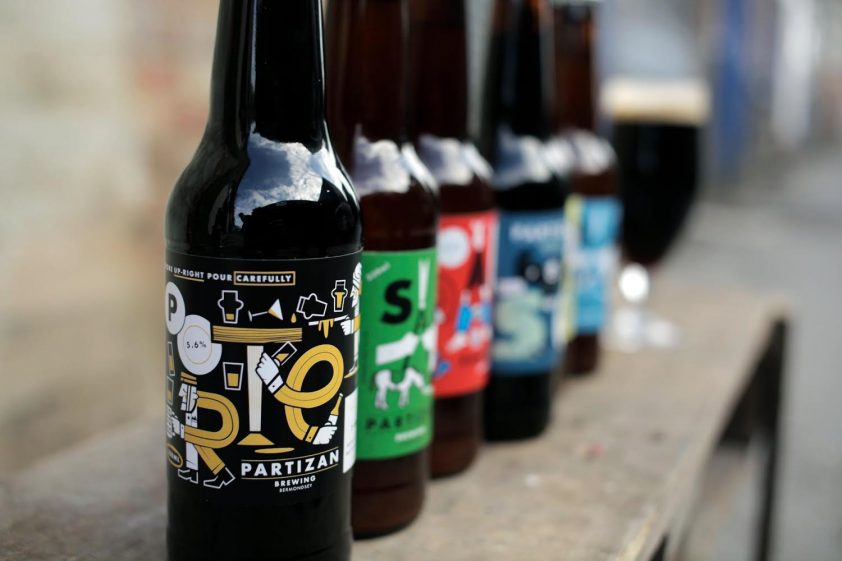 Partizan Brewery founder Andy Smith spent years brewing at home. Finally, the passion project became a reality when he moved to London and rubbed shoulders with some of London’s professional brewing elite. Quench your thirst with any of the seasonal or core brews. From a Lemon Grass Saison to the Pale Ale Extra Hop, you’re sure to find a newfound favourite. Note that the taproom isn’t open on a Sunday, so if you’re set on visiting this gem of a micro-brewery make sure you do your Bermondsey Beer Mile crawl on a Saturday. 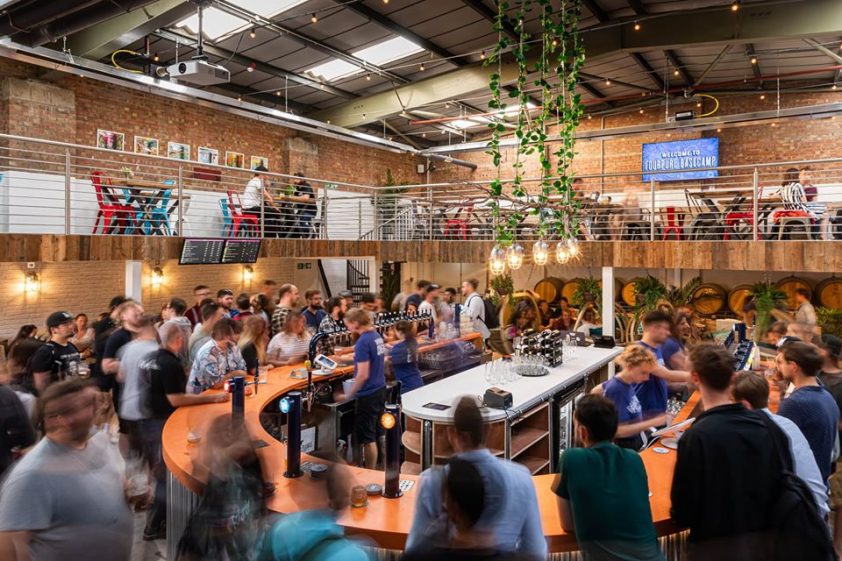 Founded in 2013 by brothers Dan and Tom, Fourpure Brewing Co. is all about good times and great beer. Their passion for small-batch brewing, seasonal flavour combinations and innovative methods mean they continually explore new tastes. They sell year-round beers in both cans and kegs, and it’s the ultimate way to round off your stumble through Bermondsey.