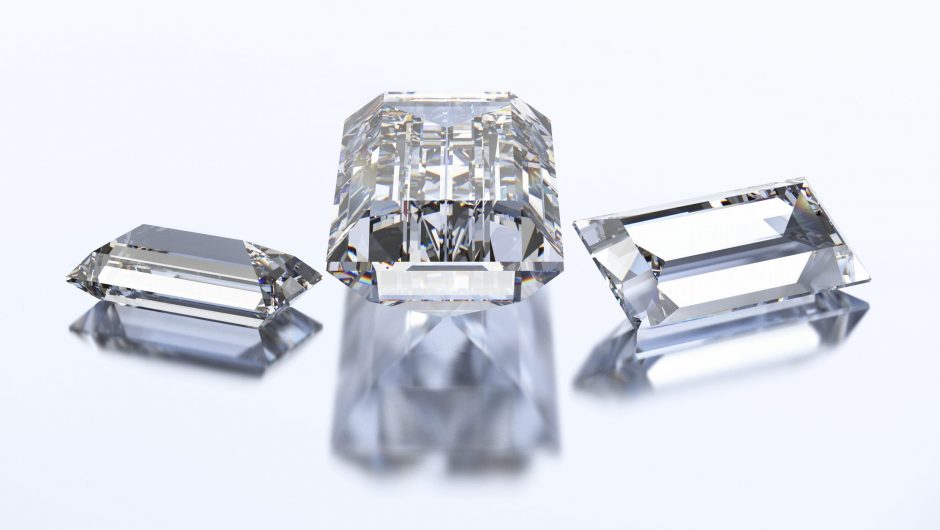 Baguette diamond cuts might not rival the quality of the classic brilliant cut diamond, but they can act as wonderful accents to a stronger centre-piece. They can help showcase the centre stone by adding shine, without drawing attention away from it.

It’s not a cut you’re likely to hear about often, but they’re more common than you think. Baguette cut diamonds are rather minimal, with clean-cut lines that speak to the modern mindset while still offering a vintage feeling to a piece.

What is a Baguette Diamond? 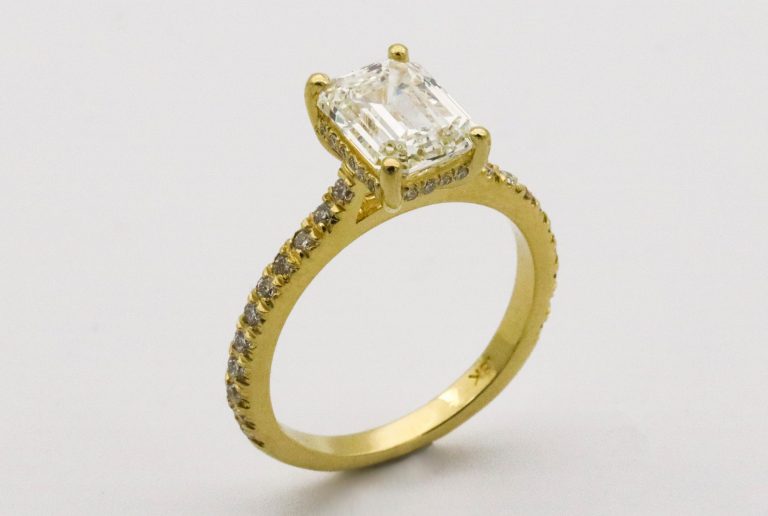 Baguette diamonds are thin, elongated, rectangular diamonds with either straight or tapered edges that angle inwards. Some of them might be almost square, but they are generally long and thin, with a common ratio of 5:1. They are usually small, and thus work well as accent stones for engagement and wedding rings, or around a full eternity ring.

Baguette diamonds belong to the step-cut family of diamonds. This family includes emerald and Asscher cut diamonds. The key differences between baguette cut diamonds and other cuts are the straight, clearly defined and perfectly square edges, as well as the number of facets. Baguette diamonds only have 14 facets, compared to traditional diamond cuts, which normally have over 50 facets. This gives them a much less sparkling appearance than round-cut diamonds.

It is also possible to get hybrid brilliant cut baguettes. These are more dazzling to look at, leading to a rise in price not only because of the hybrid cut, but because of the higher quality centre stone needed to draw attention.

The History of Baguette Diamonds

The baguette diamond came into being during the Art Déco and Art Nouveau periods, between 1920 and 1930. They slowly grew in popularity following the Art Déco period as tastes moved away from the more traditionally cut diamonds. Jewellers started using baguettes as focal pieces in all sorts of jewelry, including bracelets, pendants, rings and more.

Today, the popular baguette cut, though used mainly as accents to larger diamonds, is found in abundance in jewelry stores around the world. It’s easier to find small baguettes to use as accents, however long baguettes can make for elegant centre-pieces when done right.

The Pros and Cons of Baguette Diamonds

Baguette diamonds have fewer facets than other step cut diamonds, meaning they have less internal brilliance. For this reason, it’s imperative to use diamonds with perfect clarity and an accurate cut. Other diamond cuts can afford to have less clarity, as the many facets help to cover up any imperfections.

When choosing baguette diamonds for side stones, make sure they look the same when laid side-by-side and that they don’t clash with the centre stone. Baguettes are also more prone to chipping and dulling due to their shape.

While they make wonderful accent pieces, baguettes have a lovely minimalistic modern appearance when used as a centrepiece.

Also see  What are Asscher Cut Diamonds? Everything You Need to Know

What to Look For in a Baguette Diamond

Baguette diamonds lack the brilliance and sparkle of other cuts due to their minimal cut. Therefore, you should make sure that they are of the highest quality and clarity possible, especially if you are using them as a centrepiece. They don’t need to be flawless, but should be at least clean looking to the eye.

Their color should match that of the centre stone. Brilliant cuts will appear whiter than a baguette, so try to choose baguettes with a higher color grade so there isn’t a noticeable difference. At the same time, they should not be so bright as to overshadow the centrepiece.

They grade baguette cut diamonds on a 4C grading scale. Baguettes are the least expensive among other diamond cuts, however, the higher the grade, the more expensive they’ll be.

Due to the fact that they chip more easily than other diamond shapes, the type of setting you choose can make all the difference. Their setting needs to hold them securely and can provide some protection against damage.

The Best Ring Setting For a Baguette Diamond

The best setting for a baguette cut diamond is solitaire or solitaire pavé. This setting allows for the diamond to be oriented north-south for a classic look, or east-west for a more modern appearance.

How to Care For and Clean a Baguette Diamond Ring

The same goes for baguette diamond care as any other diamond. Keep them clean by using jewelry cleaner or soap with warm water and choose a quality setting that protects their corners.

Why are Baguette Diamonds So Popular? 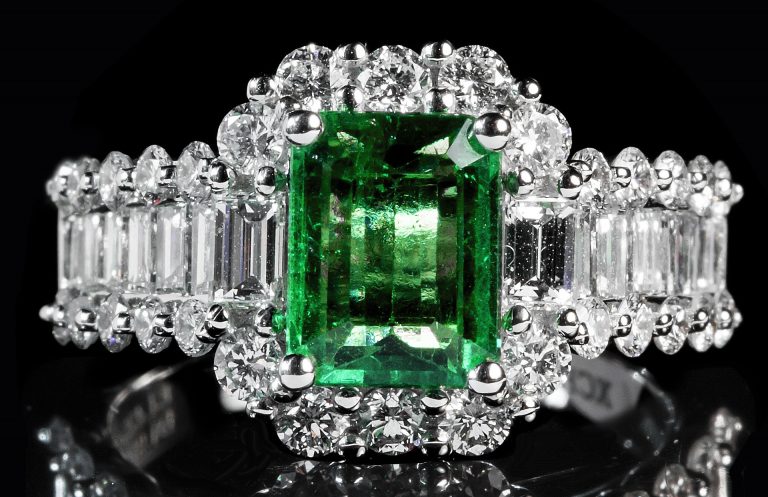 Baguette diamonds are appreciated for their minimalistic and modern look that still manages to strike a chord in the heart of Art Deco enthusiasts. They are popular choices for accent stones thanks to their elegant, yet subtle, look. They are also very affordable options for those looking to buy a ring on a budget.

Also see  What Is An Old European Cut Diamond? Everything You Need To Know

Baguette diamonds are usually less expensive than other diamond cuts because fewer cuts are needed. They will, most likely, cost less per carat than a round brilliant or emerald cut, for example.

As with any other diamond, they are graded on the 4 C’s, and their price will vary according to their grading. A top quality baguette cut diamond has the potential to match the cost per carat of more common diamond cuts, however, they will almost always be smaller, and thus less expensive.

Baguette diamonds are less shiny than other diamonds with more facets. Baguettes only have 14 facets, so they are more clear and sparkly. If they are given a more exposed setting, this will allow for more light to shine through them for a more shiny appearance.

What is The Difference Between a Baguette Cut Diamond and an Emerald Cut Diamond?

Both cuts are rectangular with long-step cuts, however, there are a few differences. Baguettes only have 14 facets, while emerald cuts have 50-58. Baguettes are usually longer, and skinnier, and lack the distinctive cut corners of an emerald cut.

Emeralds are also found most often in larger carat weights for focal pieces, while baguettes are most often smaller stones to be used as accents.

A stunning cut for a stunning em, a baguette cut diamond is one to treasure – just like all diamonds are!