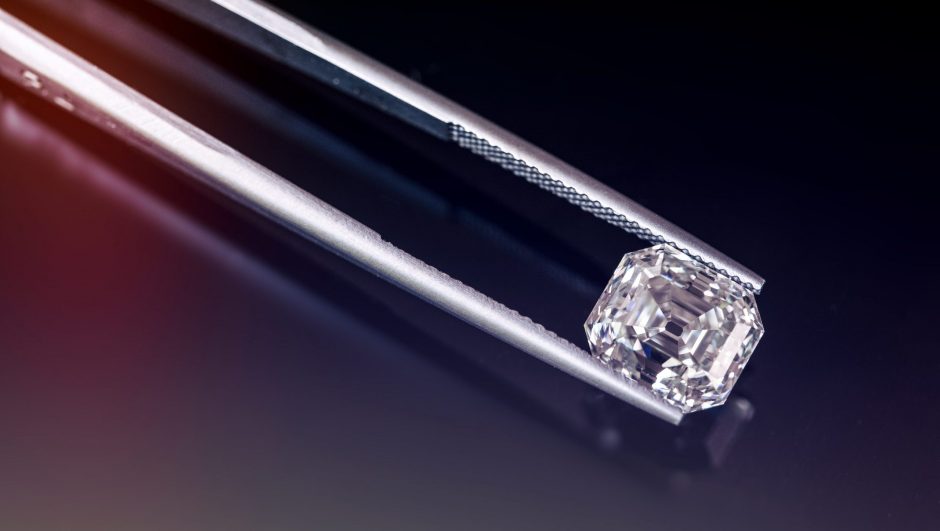 The world of diamonds and other gemstones is more complex than meets the eye. While the price tag and carat form an important part of it, there’s one feature often overlooked – the cut.

For many, it’s about what looks prettier while at the jewellery store. However, more discerning investors will know that the cut is more than simply the look.

To help you understand a bit more about diamond cuts, we’ll be looking a one of the most exquisite diamond cuts out there – Asscher Cut diamonds.

What is an Asscher Cut Diamond? 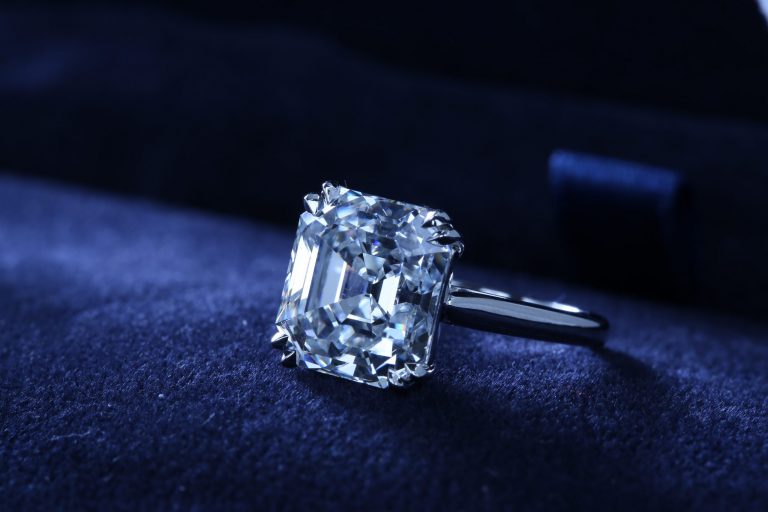 The easiest way to describe an Asscher Cut diamond is as a square emerald cut. It is a Step-Cut diamond with cropped corners and a high crown. While it may lack the brilliance of other diamond cuts, it resembles a hall of mirrors which provides a more flashy appearance and impressive clarity.

What is the Name, Origin and History of Asscher Cut Diamonds?

The Asscher Cut diamonds received their name from the company that first designed the cut – I.J. Asscher diamond company. It was founded by Joseph Isaac Asscher in Holland in 1854 and was named after the founder’s son. Joseph’s son would go on to join the diamond world and build one of the most famous family dynasties.

Joseph’s grandson would be the one to change the world of diamonds in 1902 when he created the Asscher Cut. To leverage the beauty of the cut, he put certain criteria in place that included a smaller table, large step facets, and a high crown. The result is a classic look with 58 facets, a wider set, and a reimagined emerald cut. As a result, stones with this cut have a lot more weight, while the cropped corners provide a more distinguished look.

The Asscher family owned the patent for this cut until World War II, which meant that they were the only company able to produce stones with this trademark cut. It was an incredibly popular stone up until this time, and its popularity peaked in the 1920s.

When popularity started to decline, Edward and Joop Asscher set out to build on the work of their ancestor, and in 1999 created the Royal Asscher Cut. This modern take on a classic cut has improved the quality and cut of the original Asscher Cut. It is achieved by raising the crown and increasing the number of facets to 74. This revived cut has become one of the most popular diamond cuts for brides in the last decade.

What is a Radiant Cut Diamond? History, Pros & Cons

The company name has since changed to Royal Asscher Diamond Company and is still a family-run company.

What are the Pros and Cons of Asscher Cut Diamonds?

When it comes to selecting a diamond cut for your diamond setting, you need to consider the pros and cons associated with each diamond cut. Let’s start by looking at the pros of Asscher cut diamonds.

This cut offers brilliance and flash as a result of the deep cuts in the stone. The Asscher cut is also suitable for gemstones and helps to bring the different colours to life, making it a more versatile option. It also has no sharp edges which means that it’s ideal for daily wear as the sharp corners won’t knock against things and damage the stone.

Of course, one of the greatest benefits has to be the classic design and vintage style that has made a comeback in recent years – and let’s not forget the exclusivity of having the Royal Asscher Cut available. It’s difficult to replicate and will ensure that your stone is unique.

Looking at the negative side to this beautiful cut, one of the cons has to be the fact that it shows every single blemish. The cut is unforgiving and when not properly executed, it will highlight every imperfection. Adding to this is the complicated nature of the cut that very few people are able to perfect.

Another downside to the cut is that it will look a lot smaller than other cuts of the same weight. This is because the weight is not carried in the surface, but rather underneath the stone. This size difference is very noticeable if you were to compare an Asscher Cut diamond with any other diamond cut of the same carat weight.

You also need to carefully consider the clarity and colour of the stone, as certain grades and shades will enhance the brilliance of the cut more than others.

How to Measure and Select an Asscher Cut Diamond

Choosing the perfect Asscher Cut diamond can be a straightforward task if you know what you’re looking for, if not, we’ve got just the thing to help you.

To start with, you need to look at the colour of the stone. Due to the nature of the cut, they are able to highlight the lustre and clarity of the stone. This also means that any imperfections are more clearly visible. This is why many recommend that you look at a stone with an H-colour – nothing less than that. Of course, any colours higher than that are fair game.

Next, you’ll need to look at clarity, this is something that Asscher cuts are famous for. While the cut may appear to be simpler, the clean, sharp lines clearly show any imperfections. It’s recommended that you look for VS2 when it comes to clarity. Another thing to consider is the total depth of the stone, and the lower it is the better. Try and find a depth of around 60 and 68%.

What are the Best Ring Settings for Asscher Cut Diamonds?

How Much are Asscher Cut Diamonds?

In terms of cost, this cut of stone is not more expensive than other diamond cuts and has a lower cost per carat. This is because the cut involves minimal wastage. Factors that will affect the cost include the cut and clarity. For example, if you were to buy a 1-carat diamond with H-colour and clarity of VS2, it would cost around $3600.

What Does an Asscher Cut Diamond Say About You?

The Asscher Cut is a statement cut. It’s also a more classic, humble cut. Despite the appearance, it is worth quite a bit and won’t hide any imperfections. If you wear this cut, you’re saying that you’re true to yourself and know your worth.

How Popular are Asscher Cut Diamonds in The US and Around the World?

Many regard the Asscher Cut as a classic, vintage design, and as such, it has become a popular option. Adding to its popularity is the addition of the Royal Asscher Cut that offers exclusivity due to the unique, complicated nature of the cut.

Now that we’ve discussed the Asscher Cut in detail, let’s take a look at how it compares to other diamond cuts.

These two cuts are both square and can easily be used in a wide range of settings. However, the corners of the Cushion Cut are round while the Asscher’s is cropped. Cushion Cuts are similar to Princess Cuts in that they are also brilliant cuts, unlike the Asscher which is a Step-Cut. When it comes down to pricing, the stones appear to be of a similar value.

The first and most obvious difference between the two is that an Emerald Cut is rectangular while an Asscher Cut is square. The Emerald Cut may appear bigger, however, the Asscher Cut will sparkle more. Both the Emerald and Asscher Cuts are Step-Cut and therefore show imperfections more clearly. They also fall in the same pricing bracket.

It’s All About Finding A Cut Above The Rest 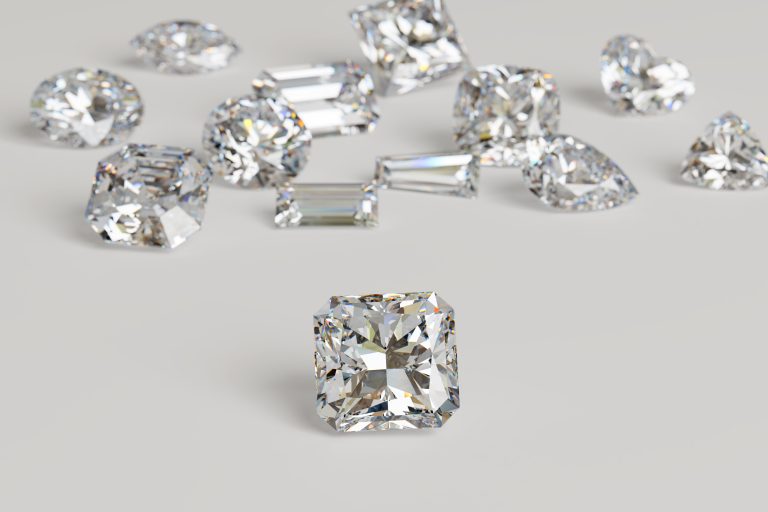 At the end of the day, the diamond cut you choose is a personal choice. You’ll choose something that you like and that matches your personality.

However, before committing to a stone, make sure that you understand the different cuts and how the grading works. This will help you make an informed decision.