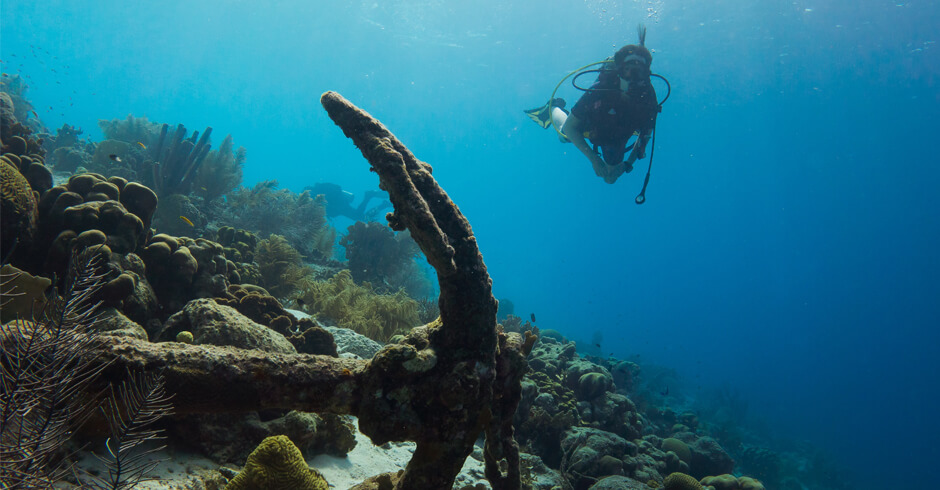 You may be surprised to know, but the UK’s coastline has in store some fairly exotic creatures, including leatherback turtles, basking sharks, and grey seals. The best places to see these animals are often the most popular diving spots, but even when you’re not necessarily looking for wildlife, submerged wrecks around the UK coast provide some impressive underwater scenes.

Take the Scapa Flow, for example. This body of water in the Orkneys has claimed hundreds of vessels, some of which gargantuan beasts measuring more than 500ft. The area is a graveyard for ships and thus naturally (or rather, unnaturally) a favourite for divers this side of Europe or the other. So, whether it’s whale watching or wreck exploring, it’s fair to say the UK is not in any short supply of diving sites. Maybe it needn’t be said, but there’s still a lot of exploring to do, so we’ve picked out five sites that remain somewhat unchartered.

Just off the southernmost tip of the Isle of Man is Burroo Ned. Scuba diving among the naturally formed reefs, very variable in their terrain, means the species you’ll likely see are in great variety and abundance – the number of species, in fact, is said to total as much as 56. Velvet swimming crabs, sea snails and pollack are easy to come by, while seals are no strangers to these waters.

This Belgian steamer was torpedoed by a German U-boat some way off the coast of Portsmouth in 1944, and has remained at its resting place ever since. Crabs and lobsters will greet you to their home, but do beware of the still armed depth charges – wouldn’t want to set one of those off.

A Trip Round the Best Golf Courses in the British Isles

The Royal Anne, the last navy ship to have been fitted out with oars, would make for some intriguing diving if the wreck was not under protected status. Like her, The Czar fell victim to an unforgiving peninsula known as The Lizard on the coast of Cornwall. It’s thought the wreck provides the best diving in the area even though much of Cornwall’s coast remains unexplored and unfamiliar even to local divers.

When it comes to diving in Jersey, you won’t get as good a diversity of marine life anywhere else in the UK. Dolphins make themselves known from time to time, while sunfish and electric rays tend to make an appearance depending on the time of the year. Cuttlefish, crabs and lobsters are common and, when you’ve delved beneath the depths to admire the coral reefs and shipwrecks, you’ll see why.

HMS Invincible ironically sank in 1758 and is a rare example of a submerged timber-framed ship. Due to her fragility, she is protected by the English Heritage, however anyone can attain a license to dive the wreck and see how the ship has survived all these years. Best be quick, though, as artefacts are continually being salvaged, while the currents of the Solent are taking away what archaeologists aren’t.