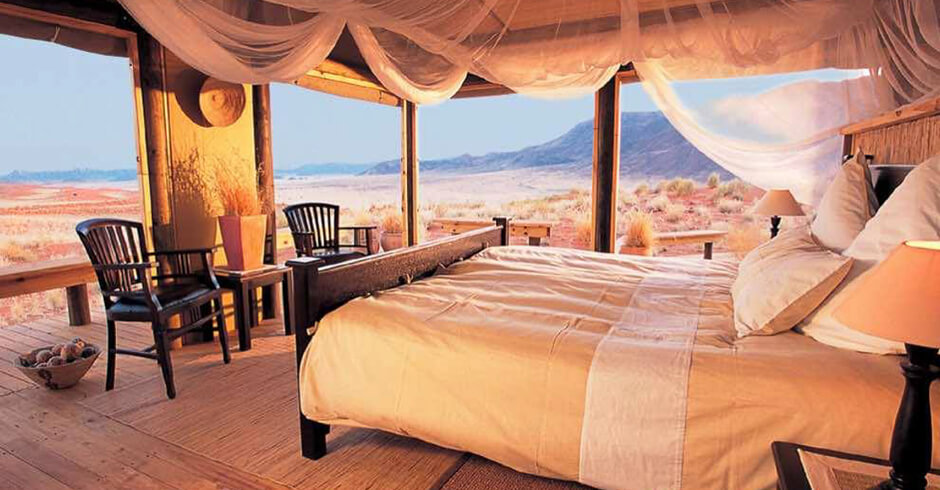 For millennia, hardened nomads have wandered the earth’s most unforgiving terrains, laying the foundations for great civilisations. Today, human imagination has led to feats of design and engineering that defy the odds in some of the world’s most remote locations.

We rarely really appreciate opulence more than when it is surrounded by the harshness of nature. Each tiny drop in an infinity pool, each contorted tree and every sculpted block of glacial ice is a defiant gesture in the face of Mother Nature. Why settle for the path well-trodden? Whether you’re an adventurer, a romantic or even seeking some solitude, allow us to guide you through the world’s most luxurious alternative escapes.

Few landscapes capture nature’s erratic personality more than the desert, and Namibia showcases it spectacularly. Cool Atlantic mists roll through at dawn, supporting an abundance of wildlife from oryx to sand cats, and just as the beating sun dries the earth, a warm breeze at dusk drifts in to form an entirely new desert landscape.

In local Nama dialect, ‘Namib’ means ‘vast space’, and venturing through the 81,000 square km of the world’s oldest desert, it’s easy to understand why. Appearing like a mirage among the Martian terrain, with its distinctery red sands and craggy mountains, Wolwedans houses six luxurious camps sprinkled across the NamibRand Nature Reserve.

The Mountain View Suite at Wolwedans Dunes Lodge is the perfect combination of luxury and seclusion. Featuring a library, infinity pool and two lounges, plus your very own butler and private guide, Wolwedans is a castle in the sand.

Wolwedans.com; Mountain View Suite (only on fully inclusive basis) from £320pn. A percentage of the cost goes directly into conserving the integrity of the Namibian Nature Reserve.

The Ice Hotel in Sweden 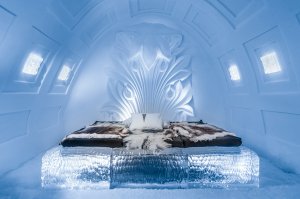 The Ice Hotel in Jukkasjarvi, Swedish Lapland, remains famous the world over as the original and most stunning. Built to a new design each winter, the Ice Hotel possesses an ephemeral beauty, melting back into the River Torne in spring.

What Are the Most Luxurious Golf Getaways Around the World?

No two rooms are the same and each is a work of art; icy chambers of a ghostly blue-white that are elaborately shaped with ice-pick perfection. Wrap yourself with velvet soft reindeer hide, and nuzzle into a down sleeping bag.

Sipping a warm mug of lingonberry juice and sampling some elk goulash after a snowmobiling trek through the wilderness, it’s hard not to be impressed by the immaculate detail that makes this ice palace truly magical.

Treehouse Lodge in the Peruvian Amazon</h2 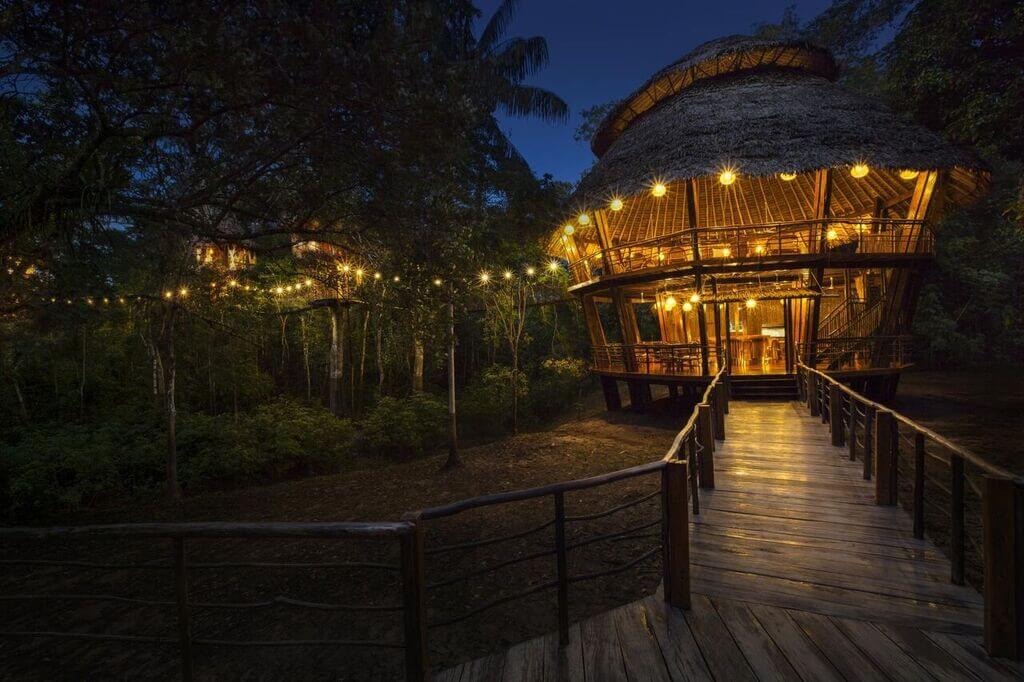 The best way to preserve the rainforest? Visit. Sitting on 350 acres of protected Reserva Amazonica, the eight treehouses of Treehouse Lodge blend seamlessly into what is the most bio-diverse environment on the planet.

Clinging to the towering trunks of the canopy trees, Treehouse Lodge is a floating archipelago of luxurious crows’ nests 70ft above the forest floor. You’ll be giddy with an adolescent sense of adventure climbing the intricate wooden towers, and trekking a series of swaying rope walkways to reach the secluded sanctuary.

King-sized beds, owing linen drapes and woven bamboo furnishings are completely open to the elements but for mosquito netting, attracting troupes of monkeys and majestic birds to your balcony. In the morning, the dawn chorus is raucous and spectacular. From the natural alarm clock of the horned screamer bird to the illumination of the natural sunrise, waking from slumber in the Amazon is like flicking your life button to ‘on’.

Treehouse Retreat In The Amazon Four-night stay for two from £1,850 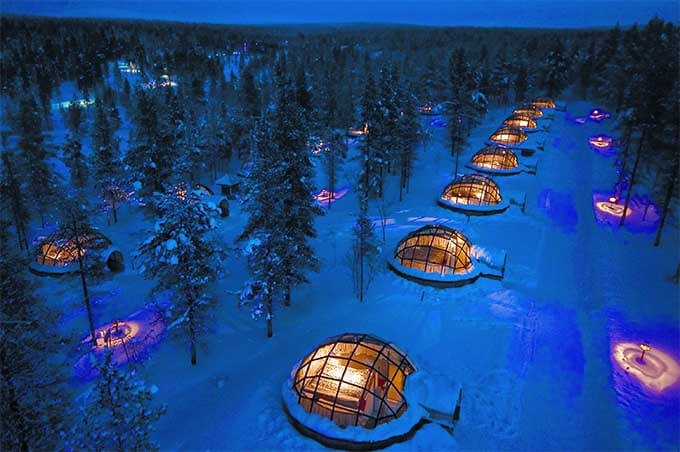 As you trudge through powdery snow and the icicle-laden conifers glisten in the gentle sun’s morning haze, the last thing you’d expect to come across in the Arctic Circle is a sparkling, gem-like, thermal-glass igloo.

The 20 Inuit-inspired dens were the brainchild of Jussi Eiramo, whose intention it was to allow his visitors warmth from which to stare up at the night sky in the hope of witnessing Earth’s most spectacular light show; the Northern Lights. The modern and cosy igloos at Kakslauttanen Arctic Resort accommodate just one double room and attached bathroom. Promising an ‘unforgettable experience’, what better way to soothe the soul at Kakslauttanen than skiing the densely packed fresh powder, or, experiencing a husky safari on a crisp Finnish morning.

Want to get even closer to nature? The resort’s authentic igloos should satisfy your primal urges. Experience Lapland’s magical polar night – or kaamos as it’s known locally – in an authentic way. While temperatures plummet to -40°c outside, the igloo’s interior remains at a cuddle-perfect -2°c. Providing everything from thick down quilts to woollen bed socks, Kakslauttanen ensures your night is authentic and luxurious.

Not only does Clayoquot put the ‘glam’ in glamping, it invented it. Opened in 1997, the Traveller’s Choice Award winner is only accessible by seaplane from Vancouver or by boat from Tofino and sits pretty in the Clayoquot Sound Biosphere Reserve, a designated UNESCO site.

This celebrity hideaway is an exotic paradise of indulgence, and untamed wilderness. The elegant safari-style pitches are ornately decorated with antiques, propane wood stoves and large verandas that suspend themselves over the neighbouring gorge. But behind the lavish accommodations, Clayoquot takes its sustainable responsibilities seriously. Gravity-fed turbines, recycling and waste composting, conservancy-driven projects and non-intrusive marine and land adventures are primary objectives for Clayoquot’s founder Richard Genovese.

Guests can track wildlife on horseback in the rainforest, or fish for salmon as part of the funded restoration of the salmon stream, and end an adventurous day dining on a gourmet menu prepared using the day’s catch and produce from the on-site organic garden. Simply put, Clayoquot is a rare example of man’s union with nature.

The World's Most Magnificent Castle Hotels

Longitude 131° in the Australian Outback 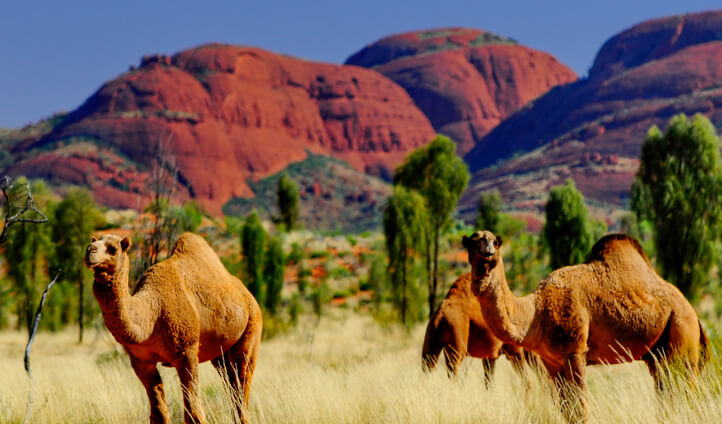 Longitude 131° is all about Uluru. In the spirited heart of Australia, the luxurious tented pavilions — each named after a celebrated Australian explorer — command spectacular views over the outback icon and the rugged World Heritage wilderness of Uluru-Kata Tjuta National Park.

Buried among the red sand dunes, out in the desert, Longitude 131°’s seclusion is deliberate, giving you the feeling of truly going off the grid. Yet with king-size beds, rain showers and Wi-Fi coupled with the service of a longstanding hotelier, Longitude 131° is no scout camp. Luxurious and unfettered, the floor-to-ceiling windows of the so-called ‘tents’ frame Uluru in a postcard vista. Guests can watch the sunrise while cosily tucked between the sheets; a simple click of the universal remote and the blinds dramatically slide upward to reveal the empty desert.

Attentive staff will pair your favourite wines with dinner, but Longitude 131° is as much about exploration as it is about outback opulence. As with everything else one could possibly need, their program of signature experiences is included. After taking in cave paintings and sipping cocktails at dusk, guests may dine on a unique Australian four-course dinner under a star-drenched sky.

Driving and Diving experience in Australia.