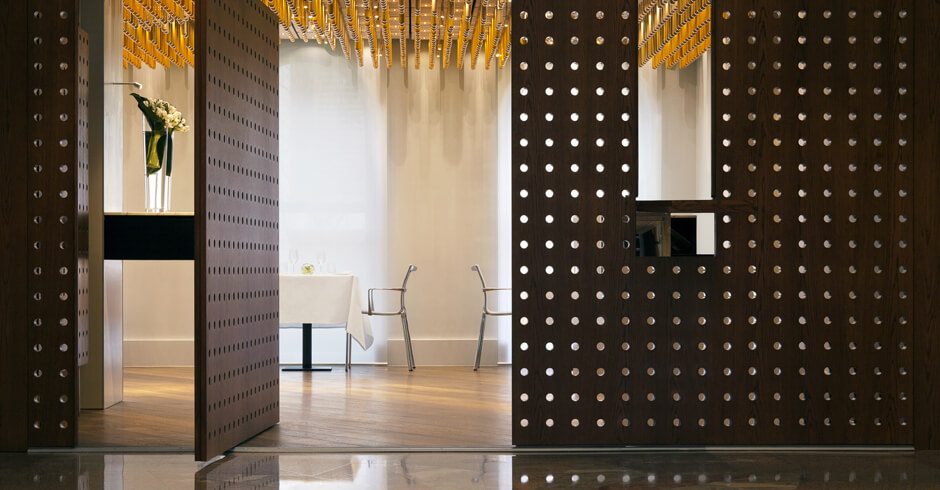 Whether it be for a business meeting, an indulgent lunch break, or simply in order to guarantee a table at one of the city’s top restaurants, luxury lunching is on the rise across London. We take a look at the most glamorous lunch spots in London, so you can enjoy fine dining at lunchtime in one of the world’s burgeoning gourmet capitals.

Lunching at UMU isn’t just about the food, as delicious as that is. They describe it as a passion, an entire philosophy no less, that moves traditional Japanese cuisine into the modern world. And even entering this restaurant has an air of the covert about it. Guests press a touchpad to enter and pass through a curtain to be transported to a world reminiscent of Kyoto, the ancient capital of Japan. The sushi and sashimi are not to be missed.

For a memorable and quirky lunch, Sketch is hard to beat. The rich, golden glow of the dining space shows off the extreme extravagance of the décor. Indeed, the “enchanting, maroon and gold hued environment” has earned the restaurant Zagat’s number one décor rating in London.

To start, an introductory sentence that sums up the sheer quality of the Amesta/Arzak brand: San Sebastian’s three Michelin star Arzak restaurant has been listed among the world’s 50 best restaurants for the last 11 years. Its London outpost, Ametsa, provides a luxurious, modernist space to lunch. Hundreds of test tubes, filled with the incredible variety of spices used in the restaurant’s cooking, hang from the ceiling.

Where to Go for Unique Dining Experiences in London? 5 Gastronomic Restaurants You Must Try

Cuisine is reflective of the philosophy in San Sebastian – reworking traditional Basque dishes with cutting-edge techniques. The restaurant is hosted in the five-star Halkin by COMO hotel in the heart of Mayfair, so don’t be surprised to share lunch with some of the biggest names in London.

With quite possibly the most creative and striking dishes available for lunch in London, this Michelin star sanctum of haute cuisine in the City of London offers a distinctly glamorous lunch offering. Toulouse-born chef Pascal Aussignac hails from Gascony, in the south-west of France, and promises that the lunch menu will take guests on a gastronomic journey through the region.

He isn’t wrong – the menu contains some spectacular options such as foie gras popcorn and cappuccino of black lobster that are visually stunning. They could feasibly have a line in postcards.

Indulge in Lunch at Club Gascon >>

Tucked away in a corner of Notting Hill, The Ledbury may well be discreet, but is also undoubtedly magnificent. Interestingly for a double Michelin star restaurant that this year broke into San Pellegrino’s top 10 restaurants in the world, the location is still patronised by a number of loyal locals. They enjoy the venue’s bright, uncomplicated but opulent dining room.

The four-course lunch menu is French based with British and Pacific rim inspirations, while the scale of the restaurant’s network of local UK suppliers would be certain to surprise.

This place has been at the top of London’s culinary scene for just shy of a quarter of a century. Over time, chef-patron Phil Howard has become a television star, appearing on programmes including Masterchef, yet the consistent quality of the restaurant’s cuisine remains.

Howard insists he’s not interested in pushing boundaries, he’s about “deliciousness for deliciousness’s sake”. And, as with the constantly perfect food (Squaremeal say they have “never had a meal that hasn’t hit the sublime” here), the glamorous décor reflects this unpretentious quest for excellence.

Take Me for Lunch at The Square >>

Joël Robuchon. Named “Chef of the Century” by the prestigious Gault Millau guide and holding 28 Michelin stars worldwide – more than anybody else – he may well be the world’s most prominent chef. One of his challengers, Gordon Ramsay was even trained by the chef. Ramsay, as you might expect, was a stroppy apprentice and Robuchon admits he once aimed a plate in the fiery Scot’s direction.

There are a host of L’Atelier de Joël Robuchon restaurants worldwide, taking on a new concept of fine dining. The London outpost is among the finest, Robuchon himself labelling the city as the contemporary world centre of cuisine.

The red and black lacquered room sets the scene, which the vibrant food complements. A unique counter concept takes centre stage downstairs, where interaction with the kitchen team is encouraged in this theatre for the senses (perhaps aptly located in London’s West End).

They prepare mouthwatering dishes, such as ‘soft boiled egg on a black truffle coulis and young Comté cream’ and ‘free range quail stuffed with foie gras and mashed potatoes’ that are packed with bold flavours.