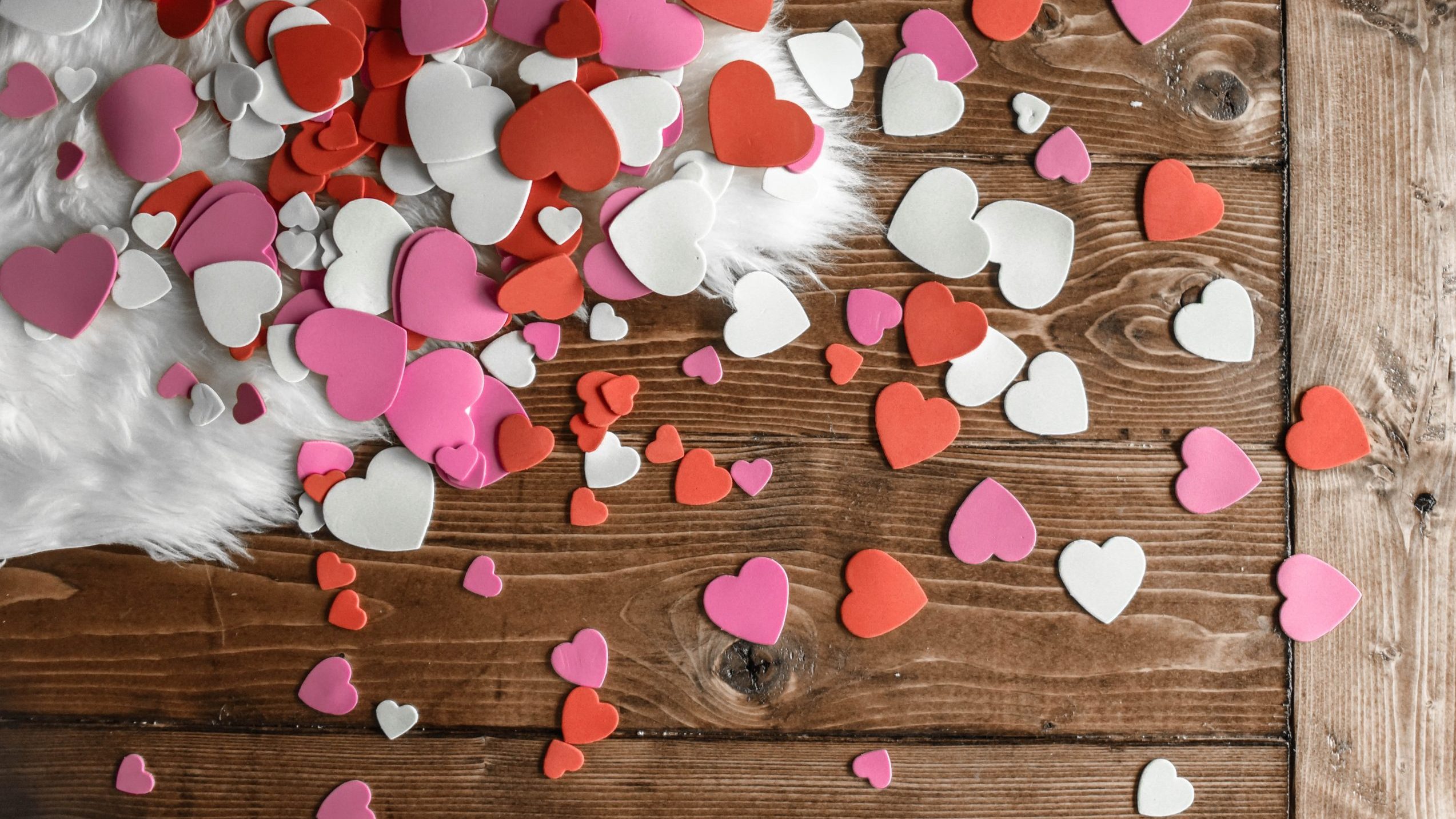 Congratulations on your 5 year anniversary! You know what this means? You’re halfway to a decade with each other. However your lives have changed in the last five years, the most important thing is that they have grown together. What better way then to celebrate with a meaningful 5-year anniversary gift!

According to the traditional and modern anniversary gifts by year, partners are meant to gift each other with wood anniversary gifts on their five year anniversary as they symbolise the strength of a relationship. If you think that wood isn’t particularly contemporary, the modern theme of silverware also helps to signify purity and strength.

Don’t let this special milestone slip by uncelebrated. None of those last-minute panicked purchases! Instead, take the time to do the research and gift your loved one five year wood anniversary gifts that says, ‘I wood never leaf you.’

What is the 5 Year Anniversary Gift? 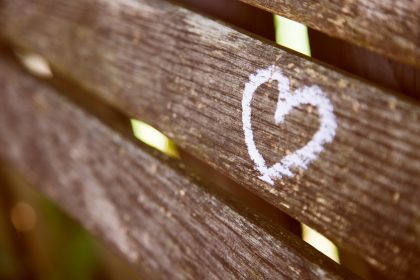 The traditional fifth anniversary gift has contained or been made from wood. This tradition symbolises the strength of your marriage; a long-standing solidified matrimony.

Many look to trees for further symbolism, synonymous with strength and wisdom. This is a great analogy as your marriage as you enter your fifth year; the relationship will have grown stronger, and each person will be much wiser. Wood is also associated with strong deep roots that are needed to grow and anchor a long-lasting tree. The same ingredients are vital to nurture a healthy relationship. Such a meaningful 5-year wedding anniversary gift isn’t it?

Each wedding anniversary carries a special gemstone that is symbolic of the time spent together by the couple. For fifth anniversaries, this stone is the sapphire.

Besides their striking beauty, sapphires symbolise wisdom, faithfulness and sincerity towards one another. These precious meanings are symbolic of the love and life that a couple has built together over the course of a five year marriage.

Daisies are the traditional anniversary flower of the 5th anniversary because of their symbolic structure. Each of the daisy’s petals radiates outwards from the centre. The middle represents the intense bond at the core of the couple’s relationship. Each petal, both delicate and strong, represents the ways the couple will expand and grow together.

One of the most recent anniversary trends is anniversary colours, with the 5 year anniversary being commemorated with blue, pink or turquoise. Keep these in mind when buying anniversary gifts or planning your anniversary celebrations. For example, you can include blue skies, turquoise waters or pink flowers if you’re planning on spending your 5th anniversary outside.

The 5th anniversary is a serious milestone for any married couple. Whether you’re gift hunting for a couple who seem to have it all or are looking for a joint wedding anniversary gift to enjoy yourselves, these experiences are full of fun, romance and excitement. Check out our list of 5-year anniversary gift ideas. 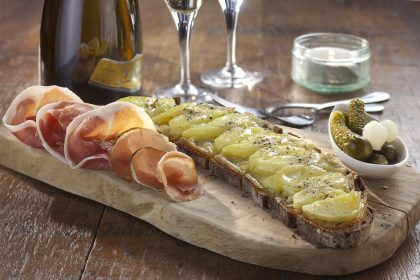 Celebrate date night with an indulgent champagne tasting experience for two for your fifth anniversary. Alongside your limited-production artisan champagnes, you’ll enjoy a board of French cheese and charcuterie on wooden board, in the same style as a traditional bistro Seal your night off sweetly with macarons to finish – a lovely fifth wedding anniversary gift indeed. 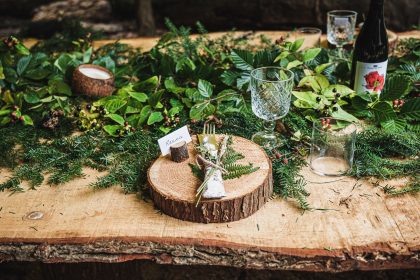 Peel back the layers and immerse yourself in a unique woodland dining experience. Nestled in nature and surrounded by stunning wildlife, together you will venture into the wild to forage for the freshest produce. Your pickings will be cooked by an acclaimed chef over an open flame as you sip on a rewarding cocktail. Share an intimate meal together surrounded by the warmth of wood, under the stars – a lovely 5-year anniversary gift. 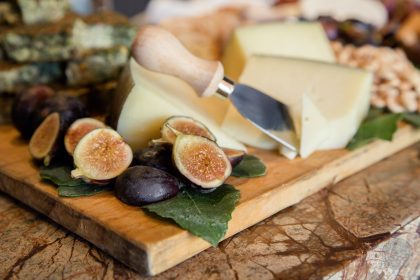 Don’t feel like going out for your five year anniversary? That’s ok; doing something in the comfort of your own home is often more meaningful. Why not surprise your spouse with a glass of bubbles and a custom wooden board stacked up with their favourite cheeses and charcuterie? They’ll need to eat their way through to discover their initials engraved into the wood! Now that’s a seriously romantic date night in for your 5-year anniversary gift. 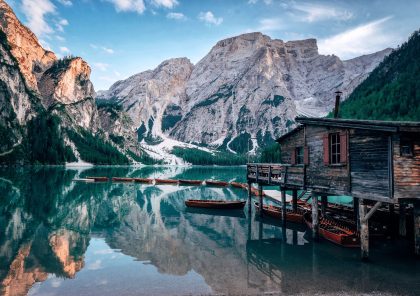 When you think of wood, chances are you think of wooden furniture. But it’s time to think outside the wooden box! For the ultimate romantic getaway that’s oh-so in theme, treat the happy couple to a unique wood anniversary gift – an overnight stay in a secluded log cabin. It’s the perfect opportunity to get in touch with nature, hop into the hot tub and cherish the memories.

Blend A Barrel in Bordeaux 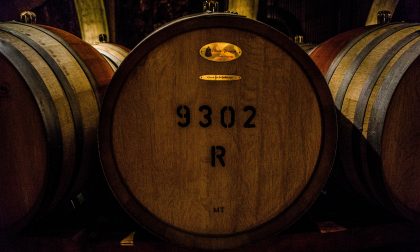 Like marriage, wine also gets better with age! If your partner is a wine lover, let them create their own wine, the perfect opportunity to capture and reflect your love story. From vine to bottle, you’ll make a wooden barrel of top-quality Bordeaux from the best appellations, along with memories to last a lifetime created on this fifth anniversary. This will be a tale worth retelling over a glass of your bespoke blend for many years to come as you reminiscent about this 5-year wedding anniversary gift experience. 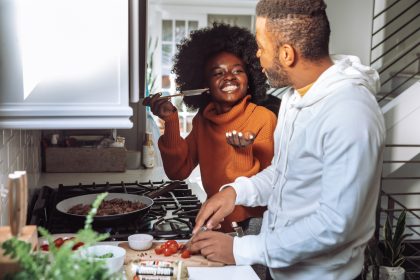 The way to anyone’s heart is through their stomach! Together you can take your culinary skills to the next level with an interactive and educational couple’s cooking class. Make the occasion extra special by surprising your loved one with a custom-made wooden spoon or serving platter to use and keep as a memento. If you’d prefer to stay in, sign up for one of our online experiences that teach you to cook in the comfort of your own home. Without a doubt you’ll have heaps of fun in the kitchen, stirring, tasting, and toasting to the occasion – the perfect 5-year anniversary gift. 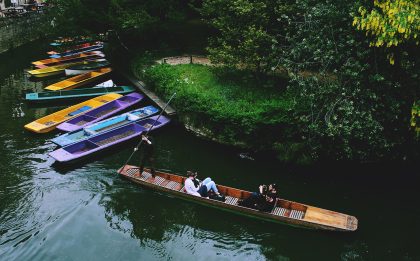 A leisurely weekend punting in historic Cambridge is the perfect way to see the sights and celebrate your wooden fifth anniversary all at once. Jump aboard a flat-bottomed wooden boat and cosy up under a blanket as you are pushed along by your punter! The best part is you don’t have to lift a finger – unless it’s to sip your champagne or snap a picture. 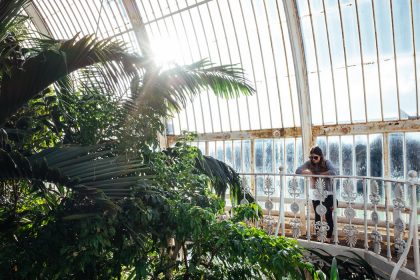 Celebrate your milestone anniversary surrounded by the world’s largest collection of living plants at Kew Gardens. Pay homage to the significance of wood as you meander hand-in-hand through inspiring exhibits such as The Great Pagoda and the Xtrata Treetop Walkway; an 18m high passage over the treetops. Not only will you have the traditional element covered, but also the modern as you venture to the Michelin Starred restaurant, The Glasshouse for an exceptional dining experience! Toast to a memorable fifth anniversary by reflecting over a glass of champagne together – it’s gonna be an unforgettable 5-year wedding anniversary gift.

5 Year Anniversary Gifts for Him 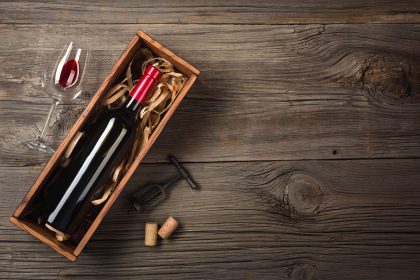 If your significant other is a wine aficionado, make your 5-year anniversary gift to him a beautiful bottle of wine in a wooden gift box. Personalize it with a special happy anniversary message engraved on the box, like your wedding vows, the lyrics to your favourite song, or wedding date. Even if he can’t wait to pop the cork and share the bottle of wine with you, the box will last a lifetime.

A wooden chess set makes for an excellent five year anniversary gift for a fifth anniversary – especially if he’s a fan of the popular Netflix miniseries, The Queen’s Gambit. He’ll spend hours of fun learning the game’s techniques, and it also makes for a perfect date night activity. The craftsmanship that goes into creating a wooden cheese board and its individual pieces speaks volumes about how strong and unique your marriage is. A high-quality set can later serve as an heirloom to pass down to your children and even your children’s children! 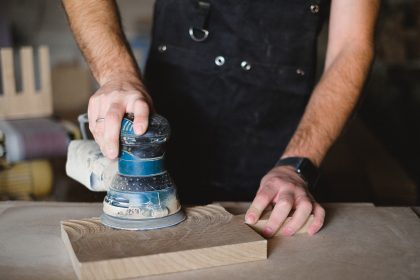 Is there anything more attractive than a man who’s good with his hands? Get him into woodworking with an introductory carpentry class. He’ll have fun getting his hands dirty and learning a new skill he can use in everyday life. Who knows, maybe he’ll get the confidence he needs to add some awesome homemade furniture to your home. Killing two birds with one stone with this meaningful 5-year anniversary gift! 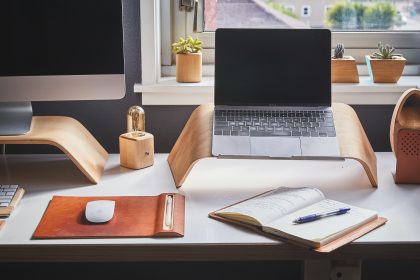 Add functional style to his home office with a wooden stand for his laptop or computer. As well as being bringing his laptop to the perfect eye-level height, it’ll give his desktop workspace a neat, finished look. There’s just something minimalist and beautiful about the fine grain of natural wood – simple yet very practical for a 5-year anniversary gift.

5 year Anniversary Gifts for Her

After five years of marriage, you probably know your wife better than anyone else. But that doesn’t mean that finding the perfect 5-year anniversary gift isn’t a difficult task, especially if she says she doesn’t want anything! But there’s something for her, no matter what her interests are. We’ve rounded up some 5 year anniversary gifts she’s going to love.

What Are The Traditional Wedding Anniversary Colors By Year? 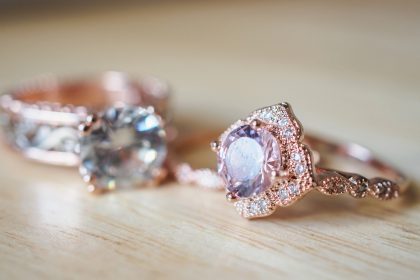 She is your rock and as such, she deserves a shiny new rock on her finger! Because sapphires are the traditional gemstone, opt for some dazzling sapphire jewellery to make her jaw drop. While blue sapphires are most popular, sapphires come in a range of colours, including the rare pink padparadscha sapphire. Find her a sapphire in her favourite colour, with a touch of silver for the modern silverware theme, and it’ll be the 5th anniversary gift that keeps on giving. 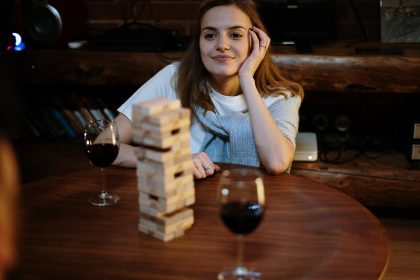 Every couple knows that a bit of competitive fun is healthy! Let her show you who’s boss with a new game of Jenga to add to her board game collection. Because it’s your 5th anniversary gift to her, have the wooden Jenga blocks engraved with your names or family crest. These blocks are sure to be a big hit, as well as a lasting memento you can bring out every year for a fun new anniversary tradition. 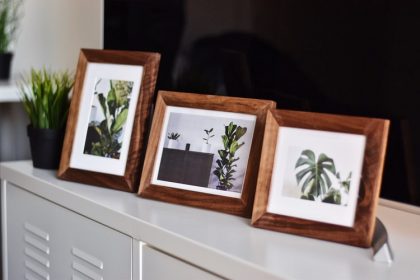 They say a picture speaks more than a thousand words. Gift your significant other with a memorable photograph in a wooden picture frame. You could buy one from a store, or try your hand at making one yourself! A homemade present like this is always a winning wood anniversary gift idea because it’s one-of-a-kind. To make it extra meaningful, engrave your wedding date or initials. This will be a great addition to your mantelpiece and an everyday reminder of the strength of your marriage. 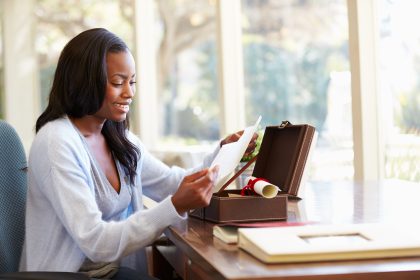 Collect traces of some of your favourite memories and store them for safekeeping in a personalised wooden keepsake box. Include everything that means something to you as a couple, whether that’s concert ticket stubs from date night or a sonogram of your first child. Have it engraved with your names or your wedding anniversary date to make it an extra special 5-year anniversary gift.