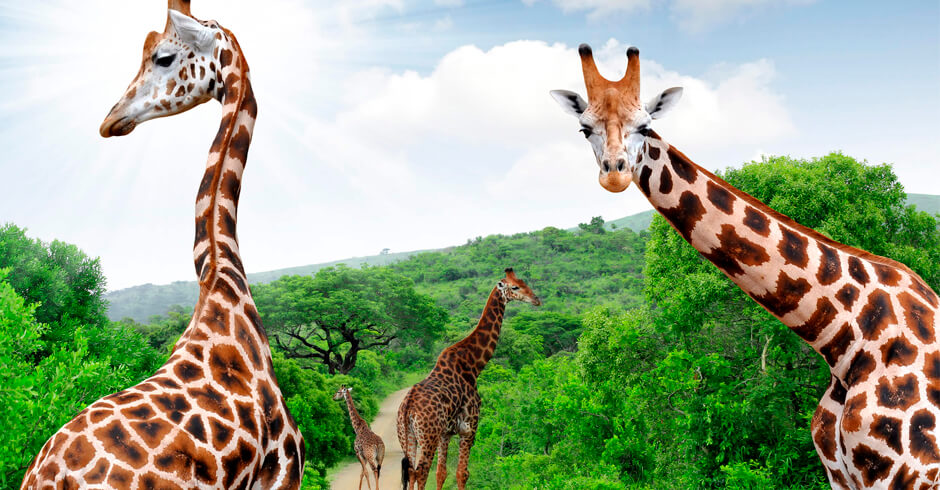 From the expansive desert of Kalahari to the symphony of wildflowers at Namakwa, via the incredible variety of wildlife at Kruger National Park and the ragged cliff edges and lush hills of the Wild Coast, South Africa is the destination that offers everything a tourist can dream of. Here, we take a look at the 5 reasons to visit South Africa.

South Africa offers picturesque views of just about every type of landscape imaginable. The Drakensberg includes some of the most stunning mountain scenery in the world, with plunging waterfalls, crystal clear brooks and continuous dusty cliffs, while the Eastern Cape, often referred to as the Sunshine Coast, offers wild seas that lash at the towering rock face and unspoilt scenic beaches where the tide rolls in more gently.

On the Western Cape, the vibrant gourmet centre of Cape Town also includes the mountain and beach South African specialities. The hidden gem of Nordhoek Beach makes a perfect escape, while overlooking the city is the dramatic Table Mountain. Home to fantastic scenic diversity further inland is the Oudtshoorn, the ostrich capital of the world, with the Swartberg mountains and Cango Caves offering their unique charms.

The Limpopo region, at the north of the country, includes incredible rolling countryside in the wilderness, with beautiful flora and spectacular wildlife. All of the dreamy aspects of South Africa can be witnessed and stored away forever, with a photography tour of the country.

South African wine is now revered the world over. Discover the fine wines that the country possesses, largely set in scenic valleys nestled between rugged mountains. The climate of the Cape matches that of a Mediterranean country – providing for perfect wine-making conditions. That, combined with the varied soils of the region, ensure the artful vintner is able to produce excellent results.

The Franschhoek and Stellenbosch wine regions are particularly well worth a visit. The towns were founded by Huguenot settlers from France in the late seventeenth century, famous for Cape Dutch architecture and oak lined streets. Grapes were planted in the fertile nearby valleys soon after settlement and the towns soon became the centre of the South African wine industry. Among others, Stellenbosch Cabernet Sauvignon today enjoys a growing reputation worldwide.

Franschhoek is also notable for hosting some of the country’s finest restaurants. The Tasting Room, in Le Quartier Francais, was esteemed this year by the San Pellegrino Best Restaurant awards. The restaurant features chef Margot Janse and her unique Africa-inspired modern cuisine. The success of the restaurant is indicative of the growing gourmet scene in South Africa, particularly centred around Cape Town.

South Africa is home to some of the finest luxury leisure and recreation activities. This includes some of the world’s best 5-star hotels, such as The Table Bay hotel on Cape Town’s waterfront, where the cool Atlantic breeze eases the heat of the city, and the Tswalu Kalahari Reserve, an intimate and luxurious spot on the Kalahari desert, limited to just 30 guests.

One of the recreational highlights is the range of world-class golf venues in South Africa. Boasting the ideal climate and the most striking scenery, it is clear why South Africa is a prime golfing destination for enthusiasts of the sport the world over. In terms of variety, there are over 450 courses throughout this vast and beautiful landscape and, as a measure of the quality of the courses, it ought to be noted that South Africa will be hosting eight European Tour events in 2014.

Both Leopard Creek Country Club and Durban Country Club were ranked among the top 100 courses in the world by Golf Magazine this year, both of which are featured in our South Africa golf break.

The sheer magnitude of what the South African coastline has to offer deserves to be focussed on in fine detail.

In particular, there is a huge range of some of the world’s best diving spots on the South African coast. From gentle shore dives to adrenaline-pumping diving with a collection of bait and hungry Great White Sharks, there is sure to be something for everyone.

At Cape Town, sharks, pelagic species, wrecks and reefs invite at the southernmost tip of the African continent. Just east of Cape Town, at Gansbaai, lie the premium encounters with Great Whites, while Port Elizabeth is the gateway to challenging dives to find the mysterious, unidentified shipwreck at Gunner’s Rock.

That spectacular wildlife in Limpopo is best characterised by the region’s Kruger National Park. It alone has over 10,000 elephants and 20,000 buffaloes. Elephants and buffaloes make up two of the so-called ‘big five’ animals of South Africa – the remaining three comprising of lions, rhinos and leopards. The White Rhino has been brought back from the brink of extinction, now flourishing in two of the country’s national parks.

The Most Beautiful African Honeymoon Destinations

Joining the lion in South Africa are the other big cats – the regal leopard and the speedy cheetah. Other quintessentially African animals found in the country include the hippo, giraffe, kudu, wildebeest and zebra. Crocodiles still menacingly rule certain stretches of river and estuary, lakes and pools. Meanwhile, monkeys, meerkats, aardvarts and wild dogs (the Cape hunting dog) roam the country.

The rich wildlife of South Africa includes a host of lesser known species, such as the rare tsessebe, a relative of the wildbeeste, or the shy elephant shrew. The stunning wildlife of the country has to be witnessed first-hand to be believed.