Blog » Travel & Getaways » 2 Perfect Days: What to do in Istanbul 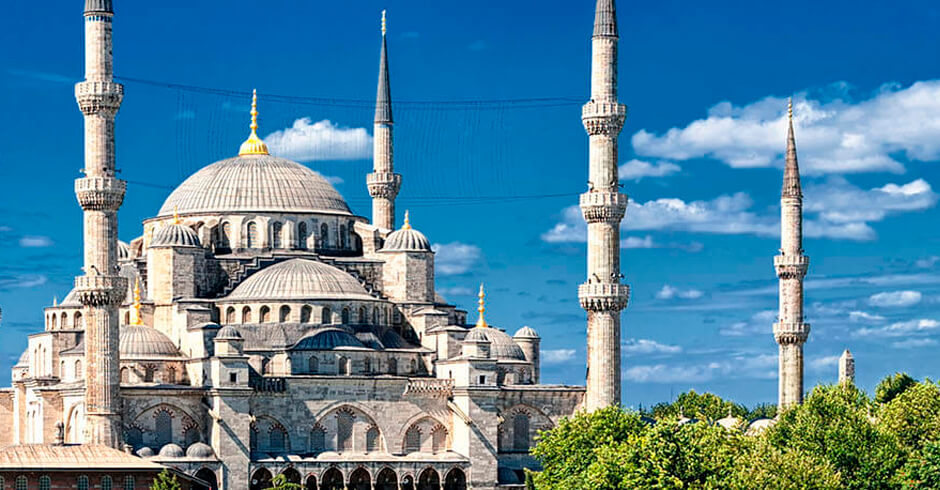 With one foot in Asia and the other in Europe, Istanbul is unlike any other Middle-Eastern city. This is where East meets the West in a burst of kebabs, nightclubs, spices, belly dancers, baklavas and historic monuments. With so much to eat, shop and do, the best way of getting the most out of Turkey’s largest city is to plan ahead!

When in Istanbul, do as the Turkish do! Often overlooked in tourist guides, böreks and a cup of strong Turkish coffee is the most popular breakfast food amongst locals. For an unforgettable introduction to the city, visit one of the many cafes near Ortaköy mosque. Located just below the Bosphorus bridge and by the water, these cafes offer breathtaking views of crystal blue waters and bustling markets. Be sure to try some of the innovative contemporary versions like rabbit and smoked cheese filled böreks.

The original Ortaköy Mosque was built in the 18th century. Within the mosque hang several examples of Islamic calligraphy executed by the Sultan Abdülmecid himself, who was also a hattat (master calligrapher). The wide, high windows let the ever-changing light reflections of the Bosphorus waters shine through the mosque. This is one of the most popular locations on the Bosphorus.

Prayers at the Blue Mosque

Also known as the Sultan Ahmen Mosque, this building is world famous for its blue tiles and design. The mosque comprises of 6 minarets, 8 domes, a tomb of the founder, a madrasah and a hospice. The grand building incorporates some Byzantine elements of the neighboring Hagia Sophia with traditional Islamic architecture. It is considered to be the last great mosque of the classical period.

The ‘million’, or milestone, from which all distances were measured in the Byzantine Empire. The stone still stands erect next to Hagia Sophia. It is one of the most popular spots for taking pictures in the city.

Known as Lahmacun in Turkey, these are wonderful lunch-time fillers. The ‘pizza’ usually consists of a round, thin piece of Turkish flatbread topped with minced meat (most commonly beef and lamb). Lahmacuns are served sprinkled with lemon juice and wrapped around vegetables, including pickles, tomatoes, peppers, onions, lettuce, and parsley. The best lahmacun’s are those sold by street vendors, we recommend trying some on Divanyolu Street, near Sultanahmet Square.

This historic monument was once a former Orthodoxpatriarchal basilica, later a mosque, and now stands as a museum. Famous in particular for its massive dome, it is considered the epitome of Byzantine architecture and is said to have “changed the history of architecture”. The original church contained a large collection of holy relics and featured, among other things, a 49-foot (15 m) silver iconostasis. In 1453 when Constantinople was conquered by the Ottoman Turks the building was converted into a mosque. Islamic features such as the mihrab, minbar, and four minarets were added during this time. It is worth hiring a guide at the door in order to understand the full significance of the building.

The busiest nightspot in the city, this street is where you can buy the crunchiest baklava’s in Turkey. This traditional sweet is a rich, sweet pastry made of layers of filo pastry filled with chopped nuts and sweetened with syrup or honey. We recommend trying some of the modern varieties like Belgian chocolate and walnut, Figs and Snickers or Coffee & Kahlua. You will find many shops selling baklava on Taksim street but the best will still be the homemade varieities sold on street carts here.

An odd combination but one that truly shows the contemporary nature of Istanbul. Close to Taksim steet you will find the famed Nardis Jazz Club. Here there are many performances by muscians throughout the week. Be sure to buy your tickets beforehand. Afterwards indulge in a juicy doner kebab from one of the many street carts on Taksim square. Ask for extra pickles if you like spicy food.

One of the best ways to get a feel for Istanbul is to take a cruise on the legendary Bosphorus; the majestic strait that runs through Istanbul, linking Europe and Asia. There are many tour providers available and all take the same route. From your cruise boat, you can view the dramatic sights lining the Bosphorus’ wooded shores: mosques, a bridge that for a time was the world’s longest, the massive Rumelihisar fortress, the 19th century mansions of the Ottoman elite and the Sultan’s fanciful gingerbread palaces and hunting lodges. If you wish a longer cruise, you can go right up till the Black Sea on your boat.

Built in 1660 with the taxes collected from the trade of Egyptian herbs and spices, the exotically domed Egyptian bazaar is filled with the enticing aromas of cinnamon, caraway, saffron, mint and thyme. Here you can stock up on spices and lunch on deliciously spicy kebabs with cool apple tea.

With over 4000 shops selling Turkish art, clothes, lamps, jewellery, food and artefacts, the Grand Bazaar can take shoppers upto a full day to navigate. This is the largest covered market in the world, so take your time browsing through the many stalls. Be sure to haggle and check out all the options before buying.

For a ‘picturesque’ goodbye to Istanbul, Galata Tower at sunset is a must. Visit the tower around dusk. From the top of this history-rich building, you will be able to view Istanbul’s European and Asian arms at the same time. As the sun sets from Asia to Euope the lights unfold like a moving painting before your very eyes.

Enter the Sultan’s harem at Sultana’s club & restaurant for a fantastic night of belly dancing and Turkish food. Belly dancing has been one of Istanbul’s favourite activities. For years, the traditional “gazino” would be the place to see Istanbul’s best belly dancers. Comtemporary clubs such as Sultana’s have upto three belly extremely belly dancers perform every night. Guests can choose to pair their entertainment with various food packages. Appetizers include paçanga pastries, traditional Turkish meze, cheese plates and seafood cocktails. A variety of kebabs and köftes are on offer as part of the main course. Assorted Turkish desserts, teas and coffee complete the dining experience here.

Let us know about your experiences

Have you tried out any of these experiences in Istanbul, and if so, what did you think? Is there anything else you would add into your “2 perfect days”? Add a comment below!