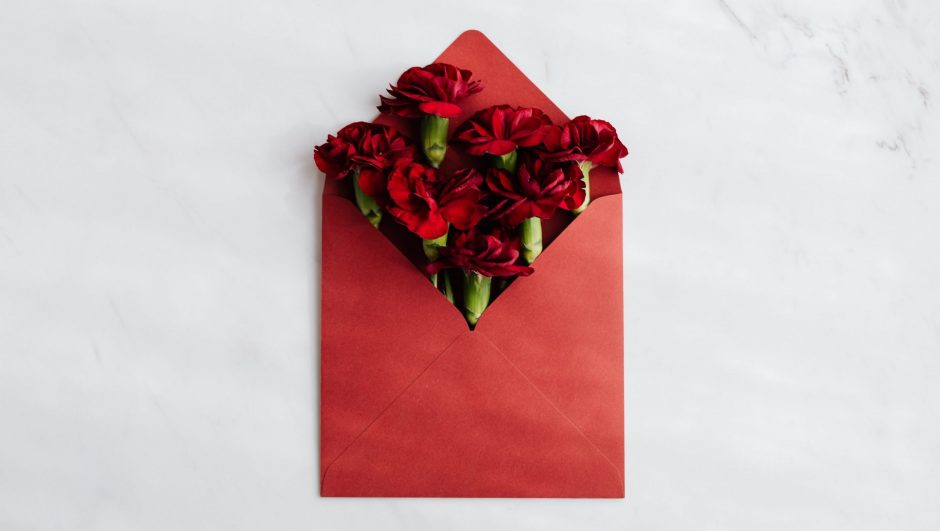 While a 17th wedding anniversary isn’t one of the major milestone celebrations, it’s still an important marker of another year spent with the person you love.

In our books, that’s reason enough to celebrate, and we’ve got fabulous 17th wedding gift ideas to help you do just that. Whether you’re looking for something big or small for your partner, we can guide you to 17th wedding anniversary gifts that will delight them.

What Is The 17th Anniversary Gift?

Not being one of the major anniversaries means there’s no traditional 17-year anniversary gift in the UK or USA. With the thinking that every anniversary should have a theme, some folks instituted a modern theme for the occasion. The same goes for a traditional flower and, depending on who you ask, a gemstone too. 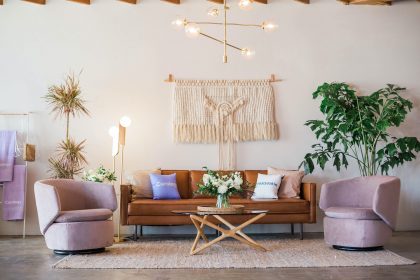 The modern gift for a 17th wedding anniversary is furniture, which symbolises the stability of your relationship this far. After 17 years of marriage, your spouse has been around long enough that they’re a permanent, unquestioned feature of your life – they’ve practically become part of the furniture! The symbol of furniture is also a reminder of the ongoing life of the couple. Turning a house into a home isn’t something that happens once; it’s something you work towards and something that happens throughout a marriage. 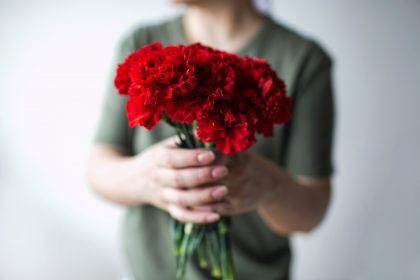 Reddish-orange carnelian has been prized for millennia. The ancient Egyptians used it to create amulets, while other cultures believed the stone had various magical powers. In modern crystal lore, carnelian is associated with stability, vitality, and courage – all prominent qualities in a successful relationship and perfect to honour a 17th wedding anniversary.

17th Anniversary Gifts For Him 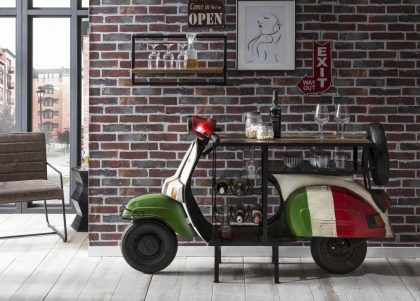 Impress him with a 17th wedding anniversary gift of furniture for his mancave. If he wants to install a bar or he wants a dedicated space at which to serve drinks to his friends, this Vespa cocktail bar from Smithers of Stamford is perfect. A real feature piece, it’s made from authentic scooter parts and reclaimed wood.

If he’s a military enthusiast, this RAF Tornado fighter jet wheel coffee table is a must-have addition to his lair. The glass-topped table comes with a certificate of authenticity to show the wheel that forms the base of the table was removed from a jet that was flown in combat in 2014. The table is finished in red and blue and has remote-controlled lights with multiple lighting effects. It’s a 17th wedding anniversary gift that will leave a lasting impression. 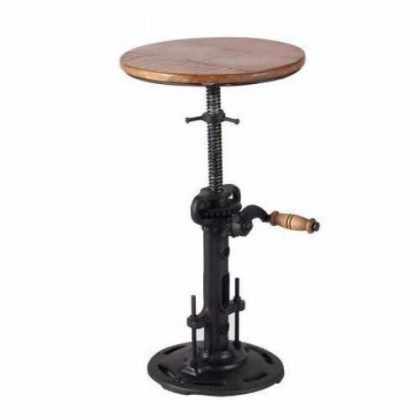 If his aesthetic leans toward steampunk, think about giving him an adjustable crank side table from the Cave UK. The height of the wooden tabletop can be adjusted by turning the crank attached to the shaft, so it’s suitable for all kinds of uses. It would be a great interpretation of the modern 17th wedding anniversary gift of furniture and a useful addition to your home. 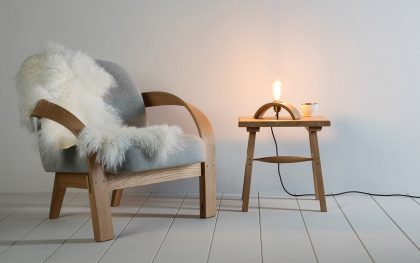 If he doesn’t have a favourite armchair, a 17th wedding anniversary is an opportunity to change that. If he likes to put his feet up after a long day at the office, a recliner is a great choice. If he prefers simple, elegant furniture, he may love Tom Raffield’s Arbor armchair. The master furniture maker uses sustainably sourced oak and 100% British wool to make chairs that are works of art but are hugely comfortable too. 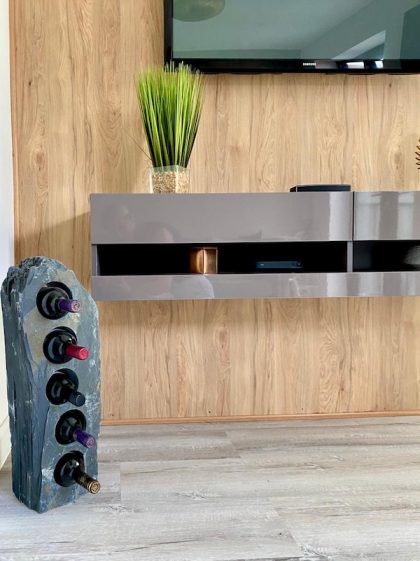 If your husband collects wine, a wine rack makes a wonderful 17th wedding anniversary gift. Instead of the standard rack that looks like ordinary shelving, choose one that also has artistic merit. Look for a rack made from upcycled materials or opt for one of the beautiful racks carved from slate by Ioan Raymond.

A carnelian signet ring would make a 17th wedding anniversary gift inspired by the intaglio rings of the ancient Romans. Set in gold, the flat carnelian gemstone can be personalised with an engraving of his initials, his coat of arms, or another symbol that is meaningful to him. Another option is to purchase an actual ancient Roman carnelian intaglio ring from an antique dealer such as Peter Szuhay. 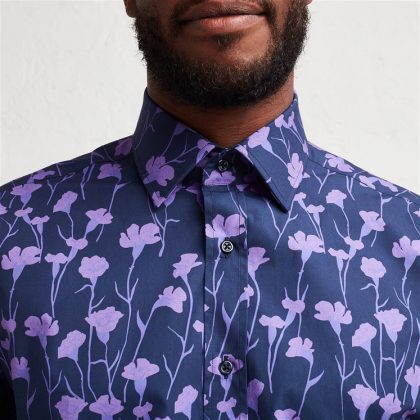 Floral prints never go out of style, so why not give him a shirt that features a print of carnations? Let him know that the flower is a symbol of love and that it’s one of the 17th wedding anniversary gifts. He’s bound to remember your love for him every time he wears it. We can’t get over this dark navy shirt featuring acid purple carnations from Gresham Blake.

If he’s a thrill-seeker, give him a 17th wedding anniversary gift that will get his adrenalin pumping. You can stay put on terra firma while he learns to drive a Formula 1 car, whizzes around in a land yacht, or goes on a tandem skydive. He can tell you all about it over drinks or dinner later that day.

17th Anniversary Gifts For Her

She’s stood with you through thick and thin. Let our 17th wedding anniversary gift ideas help you to express your appreciation of her commitment to your union. 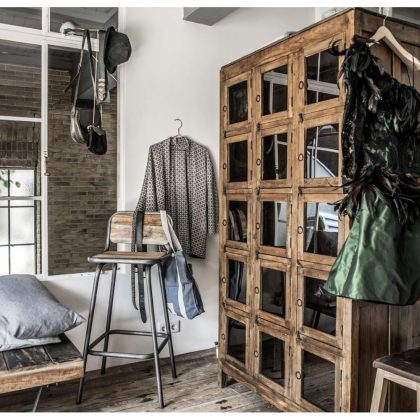 Give her a 17th anniversary gift that allows her to display some of the things that she loves, whether they be objects d’art, curiosities, or a collection she has had since childhood. Choose a cabinet that suits her style. Consider getting an ultra-modern take on the Wunderkammer, a retro-style display case, or this vintage-style tallboy apothecary cabinet with 15 glass front doors from Smithers of Stamford. 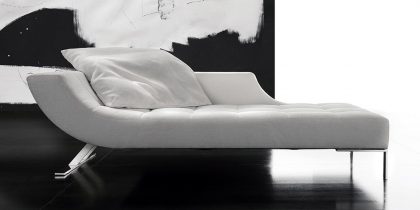 Treat her like a queen and afford her the opportunity to relax in comfort and style. A wonderful way to doing this is to give her a chaise longue as a 17th wedding anniversary gift. Two fabulous designs that we love are Linley’s Transatlantic chaise and the Roberta leather chaise longue by Calia Maddalena. 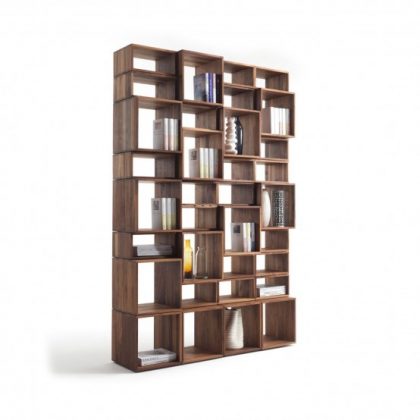 There’s nothing wrong with an old-fashioned bookshelf if it does what it’s supposed to do. However, some shelves are almost as interesting as the books they hold. If you would like to surprise her with a new place in which to keep her favourite books, we think Heal’s Freedom Project 4, which is comprised of 34 separate walnut units, is amazing for a 17 year anniversary gift.

The orange-red of carnelian combines with yellow and rose gold to make striking pieces of jewellery. Let the item that you choose for her 17th wedding anniversary gift be one that expresses her personality and highlights one of her best features. We bet she’ll love Bulgari Bulgari necklace in rose gold set with carnelian and mother of pearl discs, and with pavé diamond details.

Also see  Luxury Anniversary Gifts That Are Out Of This World 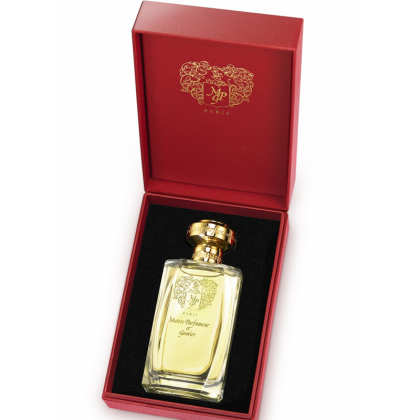 If she loves the scent of carnations, give her a perfume that contains the scent of the flower associated with the 17th wedding anniversary. Our favourites include Maître Parfumeur et Gantier’s Soie Rouge and Santa Maria Novella’s Acqua di Colonia Garofano.

Something She’s Always Wanted To Do

If you know there’s something she’s always wanted to do, now is the perfect opportunity to help her realise her dream. Let 17-year anniversary gift be an experience that she will remember. Whether she has always wanted to blend her own perfume, attend a pastry course, or make her own fascinator hat, you can make it happen. 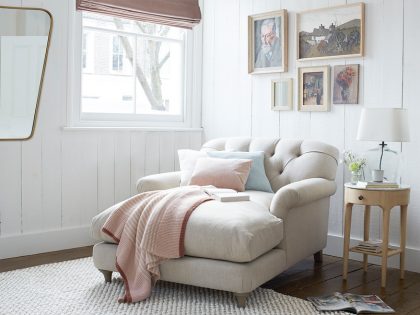 Bring more style and comfort into your home with a love seat for your 17-year anniversary gift. It’s a wonderful way to get cosy with one another while binge watching your favourite Netflix series. As much as we adore all of Loaf’s love seats, the Truffle chaise is our favourite.

What’s a 17th wedding anniversary without a decadent lunch or dinner with the person you love? Book a table at an old favourite, visit a trendy new spot or hire a chef to prepare a meal for you at home. From the quaint family-owned bistro down the road to Michelin-starred fine dining, you can find tempting array of options and gift ideas. 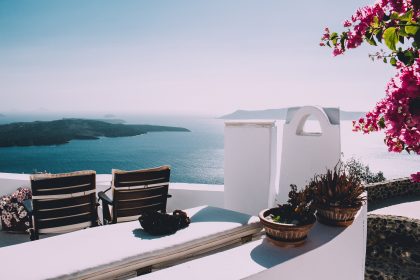 Mark the occasion of your 17th wedding anniversary with another honeymoon. Whether you keep it local and luxurious, or you head abroad for an adventurous experience, a luxury getaway is a wonderful way to treat yourselves. Even if it’s a mini-break over a weekend, take the time to celebrate your 17th wedding anniversary together and plan for those that are still to come.

A 17 year anniversary is a wonderful achievement as a married couple, and even if this isn’t a traditionally big anniversary, it deserves a 17th anniversary gift that reflects the time you’ve spent together. Splash out and spoil each other, you’ve earned it! Which of these 17th wedding anniversary gift ideas will you be getting?